HomeNewsGPUs are now up to 38% under list price, but is it...
News

GPUs are now up to 38% under list price, but is it time to shop? 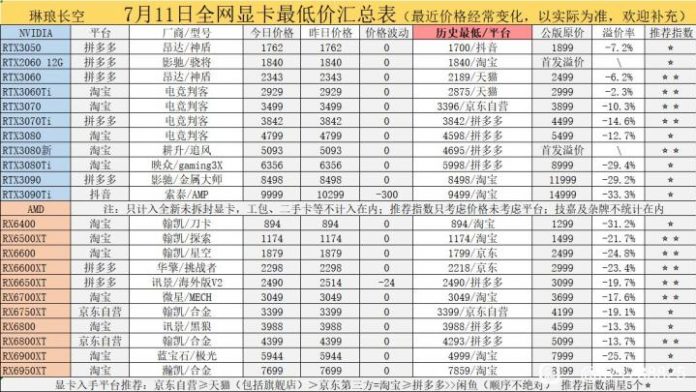 GPU prices have finally dropped well below MSRP. Although this pricing trend has only been observed in China thus far, the drops are certainly massive.

Some of Nvidia’s and AMD’s best GPUs are now selling for up to 40% under MSRP. What does this mean for the market as a whole, and is it time to buy a new GPU yet?

The GPU shortage is starting to become a distant memory as graphics cards are abundant and the prices are normalizing. This is true for the global market, but some markets are seeing more considerable price reductions than others. The latest report on the Chinese market, first posted by a member of Baidu forums, gives us a glimpse into what could one day become a reality for the rest of the world — current-gen graphics cards selling well under MSRP across the board.

The Chinese market is an interesting arena for AMD and Nvidia. Crypto mining was huge in China, and now that the crypto market has crashed, the pricing is falling, and it’s falling fast. The demand for mining cards has dropped significantly, and to add to that, the second-hand GPU market is flooded. While that is the case in the U.S. and elsewhere, we still haven’t seen retailers slashing their prices by such large amounts.

An interesting trend can be observed — Nvidia’s mid-range and budget graphics cards, while under MSRP, are still not being discounted quite as much as the beefy flagships along the lines of the RTX 3090 Ti, or even the RTX 3080 Ti. For AMD, the reductions are fairly similar all across the lineup, although the most popular GPUs are certainly holding their ground a little better — the Radeon RX 6800 XT was only discounted by 15.8%, for example, while the budget Radeon RX 6400 saw its price get slashed by 31.1%.

In a way, history has repeated itself, even though the circumstances are now slightly different. We saw a similar oversupply of graphics cards in 2018 and early 2019, post a previous crypto crash followed by a long bear market. AMD and Nvidia both tried to compensate for the increased demand, but in the end, as the market collapsed, the demand dropped — leaving both manufacturers with way too many GPUs in stock.

This is exactly what’s happening right now, although there are some more reasons to account for, such as the recovery of the supply chains that took a blow during the start of the pandemic, and the state of the global economy as a whole — but the state of the cryptocurrency market certainly plays a part. All of this adds up to there being more GPUs than there are customers who want to buy one.

Is it time to buy a GPU?

If you’re trying to weigh your options and considering buying a new graphics card, you might be wondering what today’s news means for the market as a whole. There is no way to have absolute certainty on these things, but many signs are pointing to the prediction that GPU prices will continue dropping.

AMD and Nvidia both have large stocks of current-gen GPUs waiting to be sold before the next generation swoops in and steals the spotlight completely. This is happening soon — both Team Red and Team Green are planning to introduce next-gen offerings later this year. As such, various retailers have already lowered their previously inflated prices to hover around the MSRP, also dipping below it in some cases.

There is one sure-fire way to fix the oversupply, and that would be for both AMD and Nvidia to officially lower the MSRP of the GPUs so that the retailers can be prompted to offer these cards at lower prices. Many are of the opinion that the MSRP for some of these GPUs was inflated in the first place — this especially rings true in the case of Nvidia cards, all of which are pricier than their AMD equivalents. The flagships are very expensive, and even normalizing the prices of these models would be a good step for Nvidia and its board partners.

Will that happen? It seems possible. In any case, the prices are likely to keep dropping, so if you want, you can wait for a little longer — but it’s a good idea to stay on top of the current GPU pricing in order to snap up good deals as they appear. The GPU market is a fickle beast and it’s hard to know how it will react to the arrival of next-gen cards, although so far, we’re in a buyer’s market, with an overflow of good cards waiting to be bought — the Baidu chart (first shared by Wccftech) serves as proof of that.

Another consideration is whether this oversupply will have an impact on the way AMD and Nvidia price their next-gen GPUs. AMD Radeon RDNA 3 and RTX 4000 are just around the corner, and if the manufacturers want to appeal to the masses, they should rethink the pricing of the current gen and perhaps aim to keep it a little more reasonable. As the release date draws closer, we might learn more about AMD’s and Nvidia’s plans.

Facebook
Twitter
Pinterest
WhatsApp
Previous articleThe M2 MacBook Air and MacBook Pro are not as different as you think
Next article​​Hey Samsung, what the heck is happening with the Galaxy Watch 5?
- Advertisment -