HomeComparisonAndroid Vs. iOS: The battle of apps still continues in 2020
Comparison 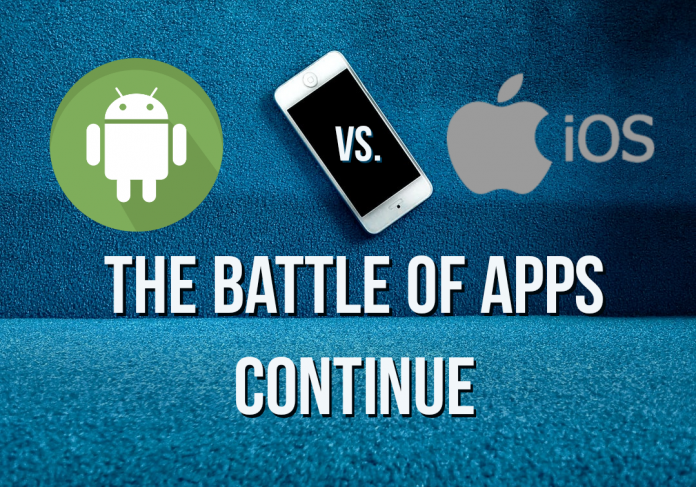 Its 2020 and yet the battle of the mobile application continues between the giants. AndroidOS and iOS are the oldest enemies on the block. Though Android seems to be having an upper hand over iOS, one can never underestimate Apple’s technological prowess.

As of December 2019, Android has a 74.13% market share in the global mobile OS market. Both began in 2007 and by 2020, both of them control 99% of mobile operating systems across the globe. Both platforms have been disruptive in nature and infused many innovations over the years.

Businesses around the world have utilized the platforms for their business apps. Mobile app development has seen a huge following over the years, due to the rise of Android and iOS apps. With newer versions of the operating systems, mobile app development goes more professional. Here, we are discussing some of the most ultimate battlegrounds between these platforms.

As of now, there are more than 2.87 million Android apps available for download on the Google Play store. It surpassed the 1 million mark way back in 2013. Android apps have gained more traction after the emergence of Kotlin as one of the main programming languages for android app development.

The common thing among these operating system is pure brilliance of Apple’s platform for development. iOS has seen many changes and innovations over the years. Most essentially, Apple’s support for Swift as major iOS development language has made the platform more interesting. Swift has made iOS apps more robust than ever.

Apple store has 1.75 million iOS apps by 2015, which has crossed 5 million by 2020. iOS apps are quite popular especially the US market, where iPhones are very popular.

It responds to user requests single-handedly creating an overload. But, with Android’s app design, an app development company can easily use independent microservices to respond to user requests through a suite.

While iOS does not provide an in-built modulator for microservices. An iOS developer can use NetworkingServiceKit for a standard monolith iOS client. This is a standard networking microservice to break the iOS monolith design and provide seamless networking to a user.

The development of apps becomes relatively easy in iOS with easy to use the syntax of the Swift language. While Android development needs good app architecture for robust development. But, as android is open system developers have more access to open repositories for better development options.

With Android, developers can explore tools like Android Jetpack and Firebase for excellent development. On testing grounds, android can be a nightmare for app testers. But, with iOS associated only to iPhones, the testing becomes relatively easy.

On the UI or user interface point of view, iOS stands out. There is a specific style guide provided by Apple for iOS developers to follow. It is the reason why iOS apps are consistent in excellent UI designs. Developers can explore tools like Xcode, Swift playgrounds, and TestFlight for greater iOS development.

Some of the app development cost you need to understand:

As far as security is concerned, iOS apps are more secure than android. The android platform has to deal with several screen orientations and large scale of devices. Though s business you get more reach through android, security solely depends on the device manufacturer.

While iOS gets the unmatched security of Apple’s devices. The latest versions of iOS have been more aggressively designed with a highly secure platform. It also gets the benefit of encryption of iPhones as a secure way to deal with threats.

App development has always been fascinating. The global business saw the rise of the on-demand economy and with it, the app development got bigger. This brought new firms in the play. Making the android vs. ios battle more rigorous than ever.

So, whether you are an established market leader or a new flourishing startup, app development is the right way. Though choosing between android and ios can be a tad confusing. Here, there are certain vital factors that can help you determine your app development strategy and choose the right platform.

Parth Bari is a Tech Addict, Software Geek and a Blogger at Kunsh Technologies. He loves to help people and found blogging the best way to help people out there so express his opinions through writing. Follow his work HERE