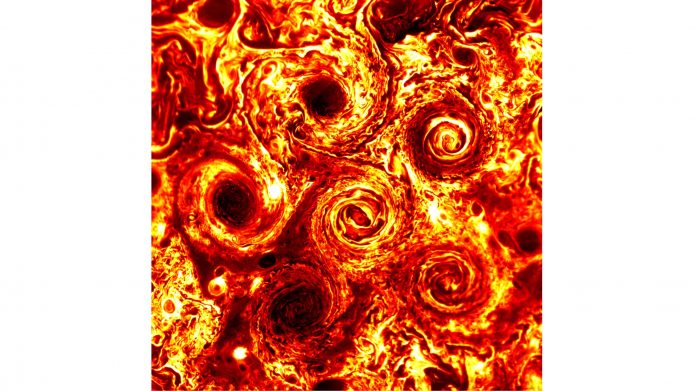 Six cyclones can be seen at Jupiter’s south pole in this infrared image taken on Feb. 2, 2017, during the 3rd science pass of NASA’s Juno spacecraft. Juno’s Jovian Infrared Auroral Mapper (JIRAM) instrument measures heat radiated from the planet at an infrared wavelength of around 5 microns. NASA/JPL-Caltech/SwRI/ASI/INAF/JIRAM

The atmosphere of Jupiter is tempestuous and full of dramatic storms and cloud formations, and last year NASA’s Juno spacecraft flew close enough to the planet to observe bizarre geometric storms at its poles. Now, NASA researchers have observed a new cyclone on Jupiter’s southern pole, with six windstorms swirling in a hexagonal pattern around a massive central storm.

“Data from Juno’s Jovian Infrared Auroral Mapper [JIRAM] instrument indicates we went from a pentagon of cyclones surrounding one at the center to a hexagonal arrangement,” Alessandro Mura, a Juno co-investigator at the National Institute for Astrophysics in Rome, said in a statement. “This new addition is smaller in stature than its six more established cyclonic brothers: It’s about the size of Texas. Maybe JIRAM data from future flybys will show the cyclone growing to the same size as its neighbors.”

A new, smaller cyclone can be seen at the lower right of this infrared image of Jupiter’s south pole taken on Nov. 4, 2019, during the 23rd science pass of the planet by NASA’s Juno spacecraft. NASA/JPL-Caltech/SwRI/ASI/INAF/JIRAM

It was only possible to collect this data because of a risky maneuver pulled by the Juno craft in October when it had to outrace the sun’s shadow to maintain its solar power.

“The combination of creativity and analytical thinking has once again paid off big time for NASA,” Scott Bolton, Juno principal investigator from the Southwest Research Institute in San Antonio, said in the same statement. “We realized that the orbit was going to carry Juno into Jupiter’s shadow, which could have grave consequences because we’re solar powered. No sunlight means no power, so there was a real risk we might freeze to death. While the team was trying to figure out how to conserve energy and keep our core heated, the engineers came up with a completely new way out of the problem: Jump Jupiter’s shadow. It was nothing less than a navigation stroke of genius. Lo and behold, first thing out of the gate on the other side, we make another fundamental discovery.”

By observing the atmosphere of Jupiter, the researchers are learning about not only the planet but also other planetary weather systems on gas giants like Saturn, Uranus, and Neptune.

“These cyclones are new weather phenomena that have not been seen or predicted before,” Cheng Li, a Juno scientist from the University of California, Berkeley, added in the statement. “Nature is revealing new physics regarding fluid motions and how giant planet atmospheres work. We are beginning to grasp it through observations and computer simulations. Future Juno flybys will help us further refine our understanding by revealing how the cyclones evolve over time.”