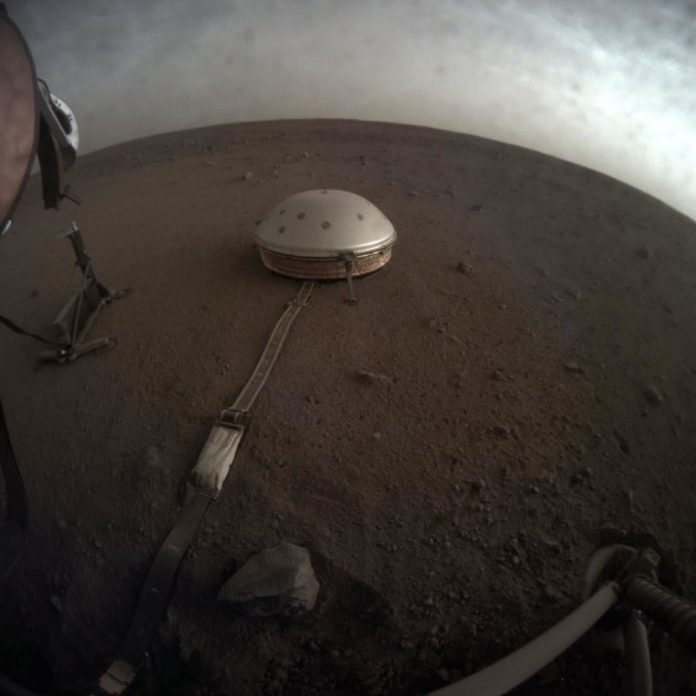 NASA’s InSight lander may be struggling with its stuck drill, but while it is stuck in place on the Martian surface it’s still collecting a ton of useful scientific information about the planet. This week NASA released a unique set of sounds collected by the lander from its time on the red planet.

InSight’s first mixtape release, posted to NASA’s SoundCloud page, features the sounds of two marsquakes. Like earthquakes here on Earth, seismic waves move through Mars’s interior and shake the ground. By listening to these waves, the InSight scientists can learn more about the interior structure of the planet. InSight detects marsquakes using its seismometer instrument, a vibration detector that the lander placed on the surface of the planet and covered with a heat shield to protect it from the harsh Martian environment.

To create the soundscapes, NASA engineers took the sounds detected by InSight and sped them up and processed them to make them audible. The sounds are still rather quiet, so you might want to use headphones to listen in on the deep rumblings.

The two events which generated the sounds were both marsquakes, with the quake occurring on Sol 173 being a magnitude 3.7 and the one occurring on Sol 235 being a magnitude 3.3. If you listen carefully to the Sol 235 quake, you can hear more bass frequencies toward the end of the recording. That gives information about the Martian crust, showing that its cratered surface is drier than the crust on Earth and has more in common with the Moon’s crust. The lack of water filling in cracks in the crust on Mars makes the quakes “ring” for longer than they would on Earth.

And there’s one more surprising set of sounds collected by InSight. In a selection delightfully titled “Dinks and Donks,” NASA has collected a sample of the different sounds heard by the lander while it is listening for marsquakes. These include sounds created by winds gusts and by the seismometer itself, which ticks as parts of it expand and contract due to temperature. These are the sounds which the scientists have to filter out to hear the quakes more accurately.

“It has been exciting, especially in the beginning, hearing the first vibrations from the lander,” Constantinos Charalambous, an InSight science team member at Imperial College London, said in a statement. “You’re imagining what’s really happening on Mars as InSight sits on the open landscape.”