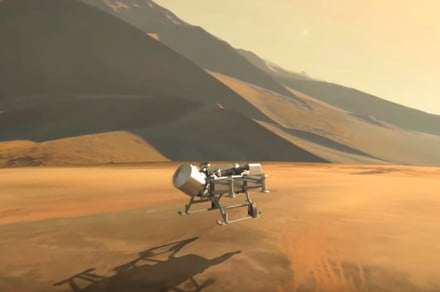 NASA is sending a drone to Saturn’s largest moon in a bid to learn more about the building blocks of life, and possibly provide answers on how it all kicked off on Earth.

The Dragonfly mission to Titan will launch in 2026, with the spacecraft and its drone reaching the icy moon eight years later in 2034.

The ambitious undertaking, announced on Thursday, is part of the space agency’s New Frontiers program, which works toward specific solar system exploration goals.

Titan is the second largest moon in our solar system and its distance from the sun is about 10 times that of our own planet. It’s of particular interest to scientists as it has a nitrogen-based atmosphere like Earth, and its weather and surface processes have combined complex organics, energy, and water similar to those that may have sparked life here billions of years ago.

The nuclear-powered drone has been designed as a dual-quadcopter, so-called for having two sets of rotors on each of its four arms. Operating in an atmosphere four times denser than Earth’s, Dragonfly will make its first landing at the equatorial “Shangri-La” dune fields, described by NASA as being “terrestrially similar to the linear dunes in Namibia in southern Africa.” It’ll then spend about two-and-a-half years “leapfrogging” between dozens of interesting locations on Titan to see what it can find.

Part of the drone’s explorations will include examination of the moon’s atmospheric and surface properties as well as its subsurface ocean and liquid reservoirs. In addition, Dragonfly will hunt for chemical evidence of past or extant life. Its final stop will be at the Selk impact crater, where there is evidence of past liquid water, organics – the complex molecules that contain carbon, combined with hydrogen, oxygen, and nitrogen – and energy, which together make up the recipe for life. The lander will fly more than 108 miles (175 km) during its mission, almost twice the distance traveled to date by all of the Mars rovers combined.

The mission, if successful, will see NASA’s drone become the first vehicle ever to fly its entire science payload to new locations for repeatable and targeted access to surface materials.

“With the Dragonfly mission, NASA will once again do what no one else can do,” NASA Administrator Jim Bridenstine said on the agency’s website. “Visiting this mysterious ocean world could revolutionize what we know about life in the universe. This cutting-edge mission would have been unthinkable even just a few years ago, but we’re now ready for Dragonfly’s amazing flight.”

Dragonfly is the fourth mission selected as part of the agency’s New Frontiers program, the others being the New Horizons mission to Pluto and the Kuiper Belt, the Juno mission to Jupiter, and the OSIRIS-REx mission to the asteroid Bennu.