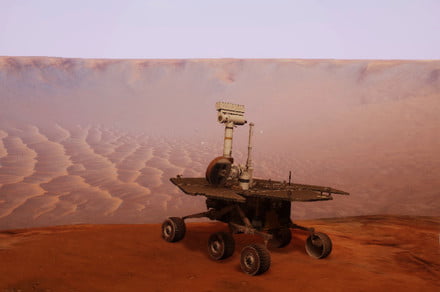 It was a sad moment earlier this year when NASA officially called it quits on its 15-year-old, record-setting Mars rover Opportunity, eight months after its last contact with the lander, following an intense dust storm in 2018. While Opportunity may be gone, Mars enthusiasts can revive the legendary rover from the comfort of their own homes — thanks to a newly updated Mars lander simulator.

Digital Trends has previously covered the Red Rover driving simulator, created by developer Alan Chan, who built his photorealistic re-creation of the Martian landscape using satellite and terrain data from the HiRISE (High Resolution Imaging Science Experiment) camera on NASA’s Mars Reconnaissance Orbiter. Now, Chan is back with a big refresh, giving users the option of piloting a re-creation of NASA’s Opportunity rover on the Victoria Crater map level of his simulator.

Not only does the update make an accurate recreation of Opportunity drivable on the surface of Mars but, if left alone, the rover will follow her original path around the crater’s rim. This comes complete with “date markers” so users can see when and where Opportunity made her key discoveries. It also lets users explore parts of the Victoria Crater that Opportunity could not.

“I added this update because I was saddened to hear about the end of Opportunity’s mission,” Chan told Digital Trends. “When NASA announced the end-of-mission for Opportunity this past February, I went back and took at look at our Victoria Crater game level map, and wanted to retrace Opportunity’s steps around the crater. This led to finding a really great detailed model of the MER rover on NASA’s website and, after some tinkering in Unreal engine, I was able to rig it and apply some simple path-following A.I. to allow Opportunity to follow its original traversal path.”

The simulator, which is available on Steam, is pretty darn impressive when it comes to accuracy. But while it’s certainly more educational simulator than game, Chan acknowledges that he made a few tweaks to improve the user experience. This includes increasing the top speed from around 20 meters per day (like the real rover) to around 20 to 25 mph. Unlike the real craft, it can also turn without coming to a complete stop. Sadly, while the simulated rover does have a science arm you can activate, you can’t actually use it for anything. “Unfortunately, it does not drill or do any science thing,” Chan said.

Nonetheless, this is probably your best hope of taking a Mars rover for a spin.