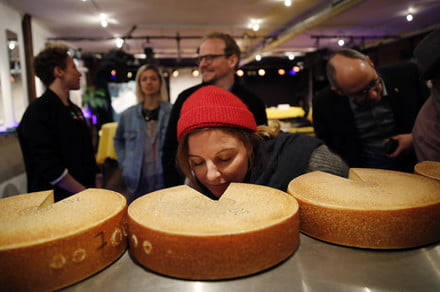 Bern University of the Arts

A funky new study shows exposing cheese to music can change its flavor and aroma. What’s more, the genre of music matters. Researchers from the Bern University of Arts played music to nine, 22-pound wheels of Emmental cheese, a semi-firm variety of Swiss cheese popular in Europe.

The wheels were stored in wooden crates and played 24 consecutive hours of either classical, hip-hop, techno, ambient, or rock and roll. Rather than speakers, the researchers attached small transmitters to the wheels to relay the sound waves directly into the cheese.

The tracks include A Tribe Called Quest’s We Got it From Here, Mozart’s The Magic Flute opera, Led Zeppelin’s Stairway to Heaven, Vril’s UV, and Yello’s Monolith. Three of the other wheels were exposed to either low-, medium-, or high-frequency sound waves. One control wheel was left in silence.

Bern University of the Arts

After the listening sessions were complete, the wheels were opened and tested by an independent food technologist. The conclusion? The cheeses that played music were milder than the other cheeses. Meanwhile, hip-hop seemed to create a more pronounced aroma and flavor than the other genres.

“The experiment was a success, and the results are amazing,” Michael Harenberg, head of Bern University’s music program and lead author of the study, told Digital Trends. “The bio-acoustic impact of sound waves affects metabolic processes in cheese, to the point where a discernible difference in flavor becomes apparent — one which can even be visualized using food technology. Put simply, cheese that has been exposed to music tastes different.”

A tasting panel made up of chefs, artists, and politicians largely agreed that A Tribe Called Quest’s cheese was the strongest in flavor.

The reason for the change aroma and flavor is unclear. However, Harenberg thinks it may have something to do with the vibrations created by the music.

“The resonances of the music seem to influence the maturation process,” Harenberg said. “We have to investigate the exact connections in a scientific project that we are currently preparing.”

The researchers now want to expose different wheels to different types of hip-hop, Reuters reports. Someday, we may even see a variety in the cheese aisle, labeled by music genre.

“It is still too early to think about concrete products,” he said. “But ‘Emmentaler hip-hop’ cheese with a distinctly different taste could be interesting.”


Facebook
Twitter
Pinterest
WhatsApp
Previous articleGoogle hit with another fine by the EU, this time for $1.7 billion
Next articleGrab Corsair’s popular K70 MK.2 RGB mechanical keyboard for $70 off