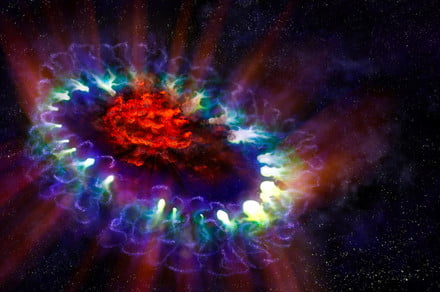 And then there’s the radiation. We’re pretty much protected from hazardous levels galactic cosmic rays (GCRs) by our planet’s magnetic field but, just past low orbit, high-energy protons and charged particles can cause serious health and cognition problems.

But new NASA-funded research out of the University of California, San Fransisco and Brookhaven National Laboratory in New York suggests that not everyone’s brain is impacted by cosmic rays. In fact, the brains of female astronauts may be completely immune. In a paper published earlier this month in the journal Brain, Behavior, and Immunity, the researchers showed that female mice are immune to the cognitive damage that results from simulated space radiation. The study may pave the way toward treating this hazardous consequence of space travel.

“These results demonstrate that female mice are protected from the deleterious consequences of deep space exposure,” Susanna Rosi, a neuroscientist at UCSF and one of the study’s lead authors, told Digital Trends. “More in detail, we found that male mice develop a large range of cognitive deficits that are not present in females after exposure to galactic cosmic ray simulation.”

“When we look carefully in the brain we found fundamental differences between male and female,” Rosi said. Only male brains had an increase in inflammatory cells and a loss of neural synapses. “These results are compelling because they show fundamental sex differences.”

GCRs are not an immediate concern for today’s astronauts. The International Space Station is still within low-Earth orbit and no human has made it beyond the planet’s magnetic field since the Apollo missions. But with the way the new space race is shaping up, we may soon be headed back to the moon and Mars, where protection from cosmic rays is a top priority.

Rosi and her lab, including postdoctoral researcher and first author of the study, Karen Krukowski, have put forward the hypothesis that inflammatory cells called microglia account for the disparity between female and male mice by protecting female but not male brains. However, it’s unclear if or why this is the case.

The researchers note that this is just the beginning of what is likely to be a long investigation into safety measures for future space missions. They will continue to test more complex combinations of simulated space radiation and research ways to modify microglia to potentially treat these cognitive deficits.