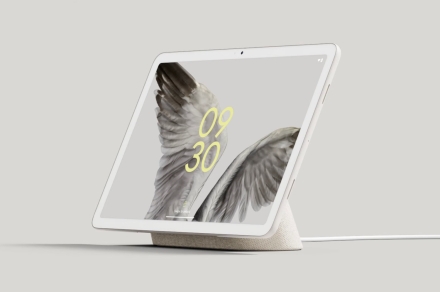 2023 will see Google launch its first Pixel-branded tablet in years, but the device has already shown up on the Facebook Marketplace — complete with its docking station. The Pixel Tablet is being priced at $400, and it’s likely to be a prototype if it’s as real as it appears.

While the company had sworn off making tablets and Chromebooks of its own, a shift in the winds and the rise of foldables mean that Google wanted an affordable flagship tablet of its own to push its large screen vision, hence the Pixel Tablet. It’s no iPad, sporting a plain and utilitarian design, and the docking station means it can even take the place of a Nest Hub.

The Marketplace listing shows our first images of the Pixel Tablet running the large-screen optimized Android 13, as well as the aforementioned dock and charging cable. Though Google had shown them off already via renders, these are the first live images we’ve seen so far.

Google’s Pixel Tablet is not the only Pixel product to leak this way. The Pixel 6 Pro popped up on sale in Nigeria’s computer village prior to launch, while the Pixel 7 also showed up on Facebook Marketplace and eBay. There aren’t many details hidden about the Pixel Tablet, though. Google’s product page already reveals most, with a leak earlier in the year adding some finer detail.

The Pixel Tablet is expected to release next year around Google I/O, if not earlier. It should be powered by the same Tensor 2 chipset that’s available with the Pixel 7 and 7 Pro, plus the recently-leaked Pixel Fold. Other specs include an 11-inch display, up to 256GB of storage, and support for Wi-Fi 6.