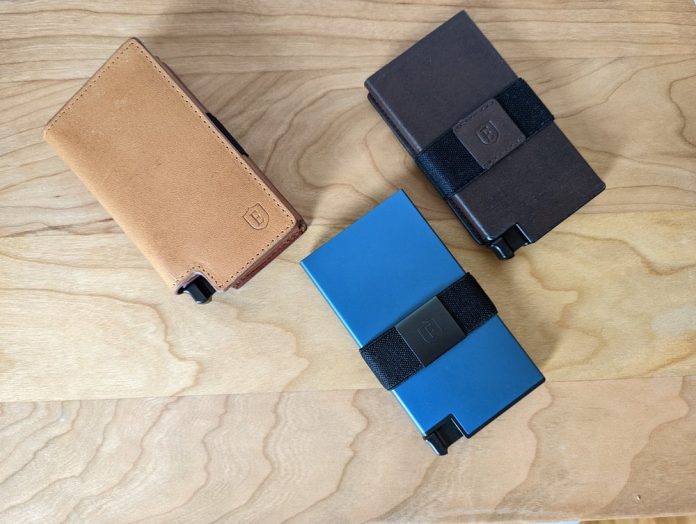 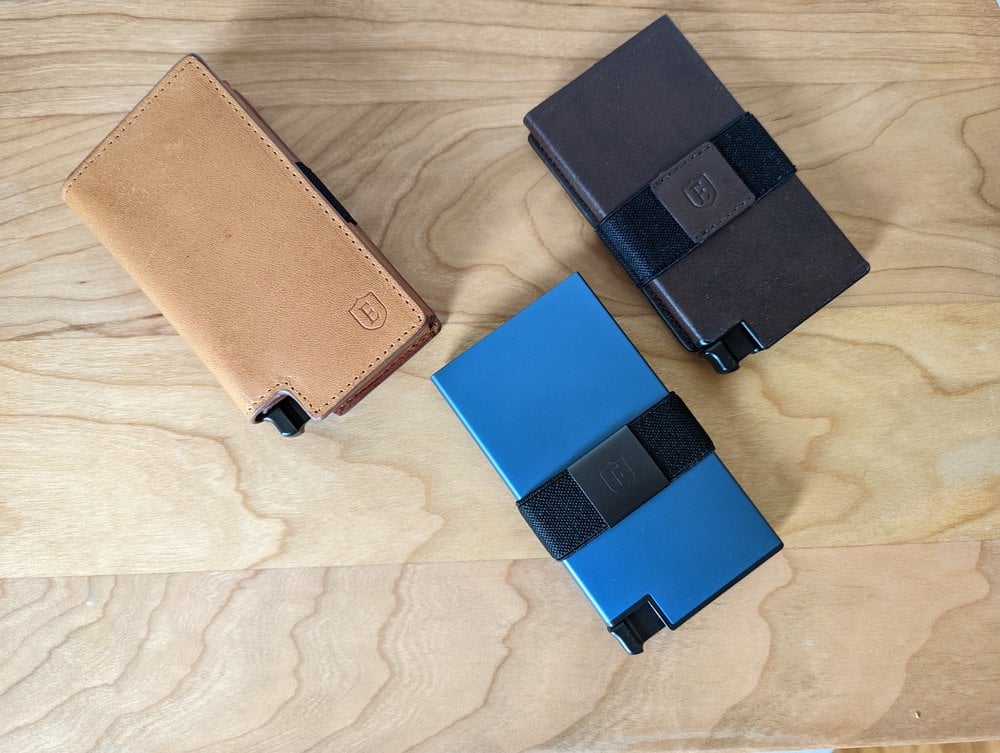 Minimalistic wallets are a going trend. Gone are the days of the giant tri-fold wallets of our forefathers. Those bulky back pocket bulges have given way to a new generation that carries just the necessities: a few cards, ID, and maybe some cash.

Ekster has been at the forefront of this movement for years. The company was nice enough to let us test out its three most popular models: the Aluminum Cardholder, the Senate Cardholder, and the Parliament Wallet. Each shares a common design philosophy but has its own unique feature set.

All these wallets revolve around Ekster’s proprietary cardholder system. This plastic sleeve allows for your favorite payment cards to live packed away in this cavity. But when you need them, there’s a small tabbed lever in the bottom corner of each wallet. 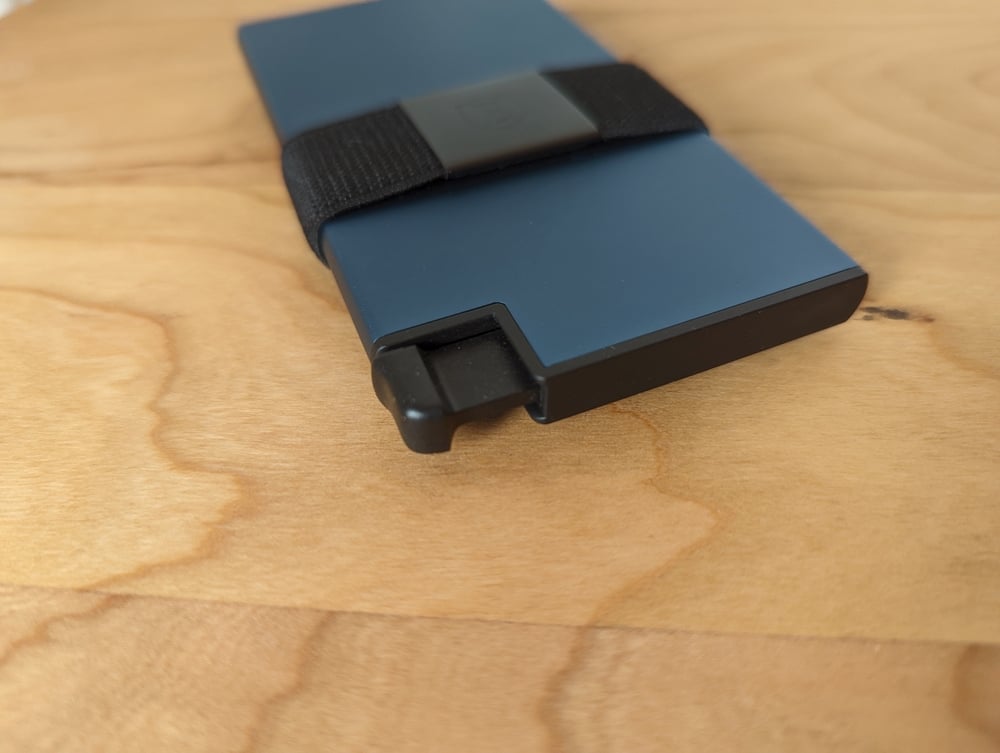 This tab triggers the spring system in the cardholder to push the cards out of the top of the unit in a flared array. It’s very similar to how you’d fan a deck of playing cards to see multiple ones at a time. The Ekster system works great to have quick access to the needed card every time.

Each also has RFID protection. This shielding makes sure your cards are always secure while in the cardholder mechanism. This is a great option to make sure your data is safe while in your pocket.

The name is pretty literal on this one. The Aluminum Cardholder is a sleek metal shell with Ekster’s card system in the center. The edge of one side is etched with the brand name and at the bottom, you have the card trigger. The rest is just smooth uninterrupted aluminum.

The choice of this metal makes the Aluminum Cardholder the easiest to toss in your pocket of the three Eksters. It’s lightweight and slim. You will mostly forget it exists while carrying it. Which is awesome. Many minimalistic wallets make this claim, but once you pack it with your cards it’s just another wallet. The Aluminum Cardholder understood the assignment and nailed it. 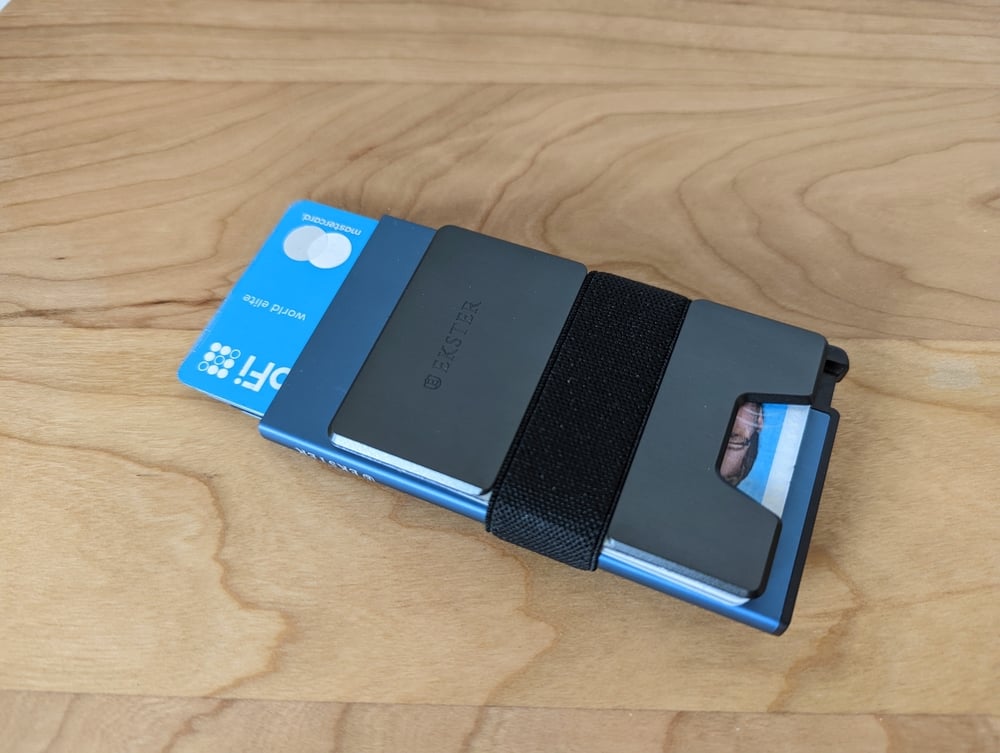 So what’s with the band? Well, just because it nails pocketability doesn’t mean it’s not extendable. The elastic band in some form is an accessory builder for all these wallets. On the Aluminum Cardholder, it can be a simple place to hold cash, or with the extension plate, you can stash a few more cards on the outside of the wallet.

That’s where I’ve landed. I have around six cards in the cardholder and another five in the backplate. It’s become a great combo to get the slim fit of the Aluminum Cardholder and still house my driver’s license, insurance cards, and other credit cards on the outside.

Using the Aluminum Cardholder has been great. I had a larger slim wallet, but this has carried me even further down that path. The cardholder worked without issue carrying my cards and ejected as expected every time.

Let’s move on to the more sophisticated sibling of the Aluminum Cardholder the Senate. The basic design is very similar. Think of it as a leather wrapper Aluminum and you’ve nailed the Senate. The leather has a nice feel and I can see how this would look great after some wear. 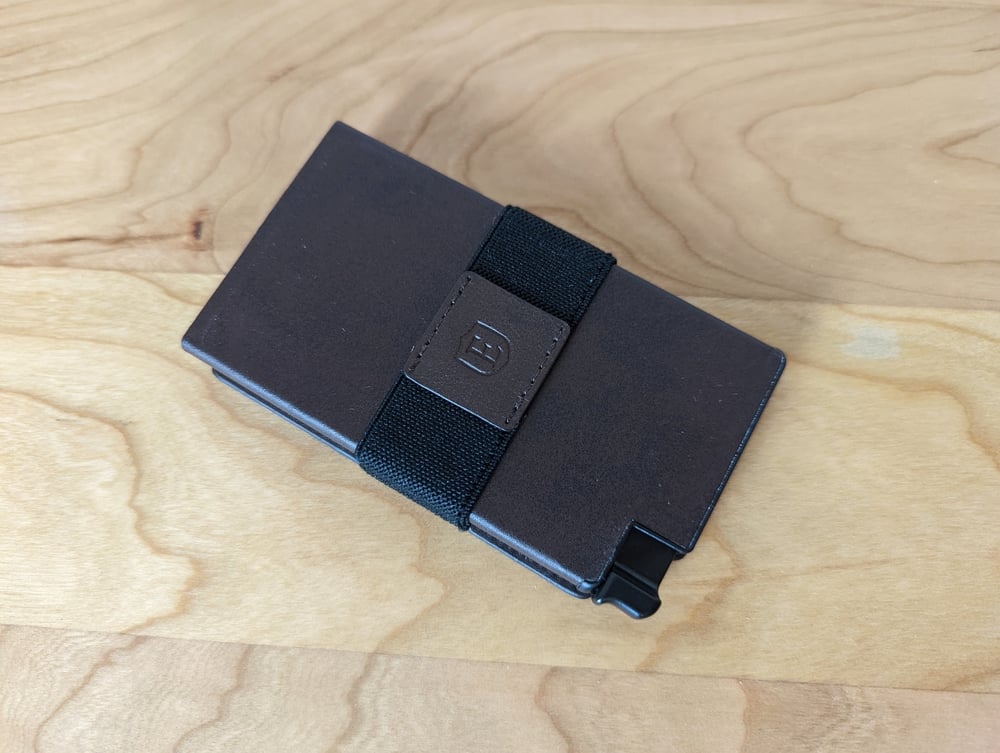 Again, the Senate just builds on the foundation of the Aluminum Cardholder. The internal mechanism can hold the same 1-6 cards. The card ejection also works the same with a trigger at the bottom.

Instead of a removable band and backplate, the Senate has a leather plate and band sewn into the wallet. To add to the suave of the Senate, the backplate has a dedicated slot for you to use for a prominent card. Personally, I’ve used this for my driver’s license, but could also be used for a favorited pay card or the Ekster tracker card powered by Chipolo.

As expected, the Senate functions very similarly to the Aluminum. The slim design almost gets lost in your pocket and the leather wrap does add a premium fit. I did find I preferred the dedicated single card slot on the backplate of the Senate. It made me wish the metal one on the Aluminum had this dedicated option.

Next up is the Parliament Wallet. This Ekster option is the most akin to the standard wallet. It has the patented cardholder internally but is housed inside a bifold leather binder.  The front has a leather cover and the back has a dedicated card slot. 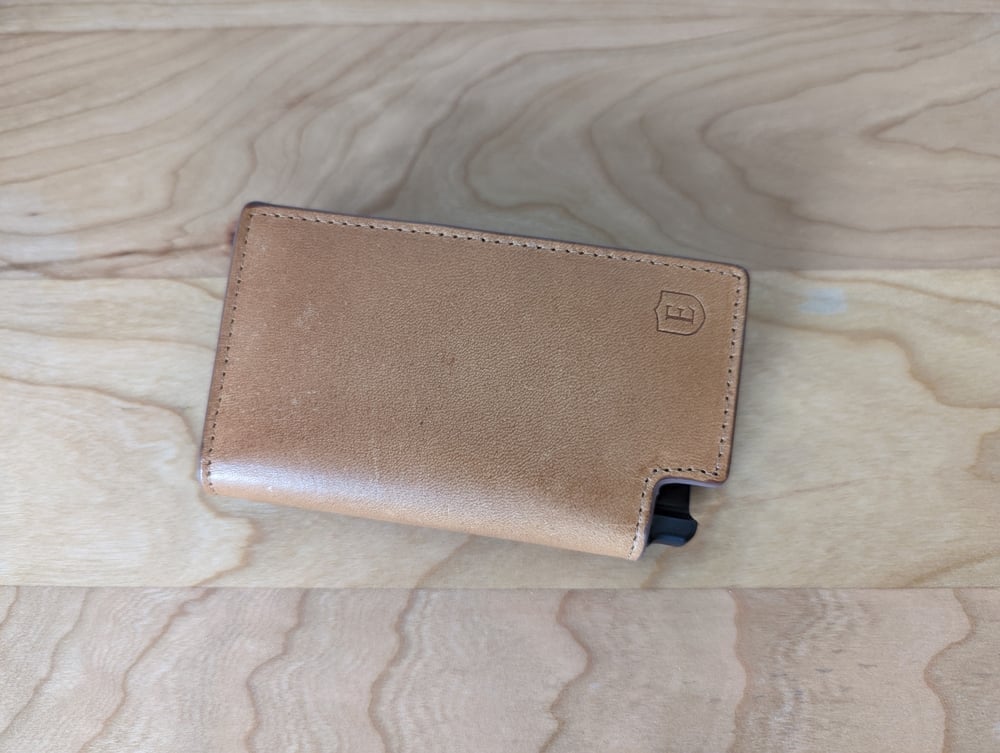 Inside the outside flap are two more card slots and a sewn-in band for additional storage. All this combined space can hold up to 12 cards. The inside slots on the cover are supposed to hold up to three cards but I’d stick with just two in each or it has trouble closing.

Using the Parliament is a hybrid of old and new to me. It’s slimmer still than a traditional back pocket, but it’s definitely creeping into that territory. Someone who still travels a ton and has to keep physical receipts and multiple cards might find this design more comfortable. It could also be a bridge device to not shock yourself into the slimmer models right off the bad in your minimalistic journey. 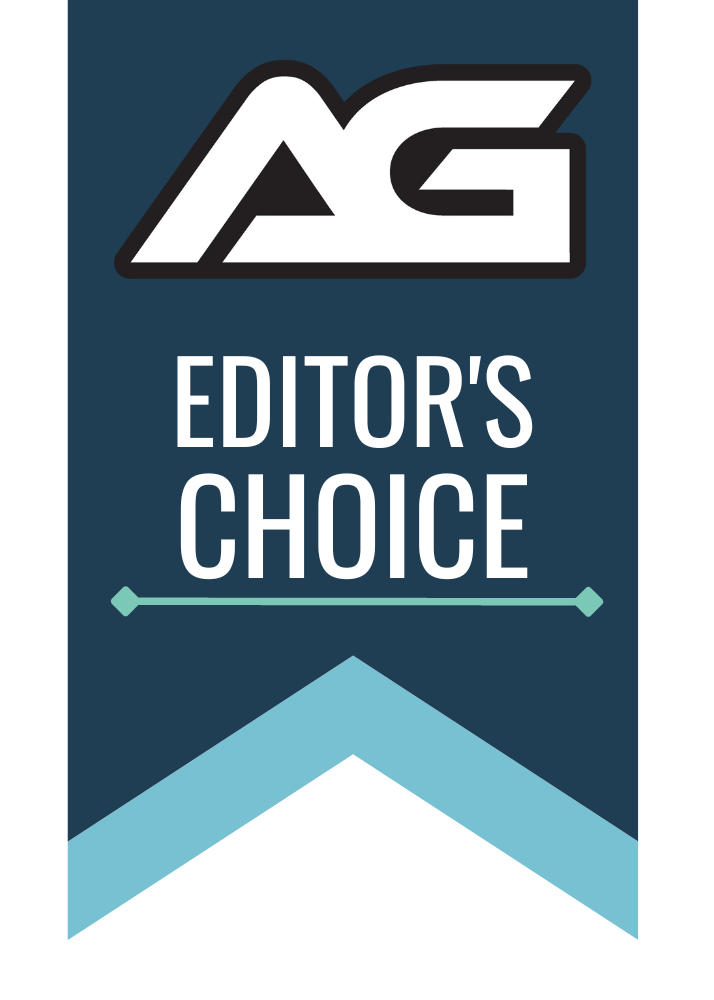 This award is reserved for products, apps, and services which have an overall average score of 4.25 or higher. Graded on a scale of 1-5, our reviews look at a variety of aspects to determine a total rating. Factors which help to create the composite score will often include design, features, price, warranty, audio, battery, general and performance.

I can’t say enough good on these wallets. Ekster has nailed the form and function of the slim wallet with all three: the Aluminum Cardholder, the Senate Cardholder, and the Parliament Wallet. Each has its own spin, but all would be great additions to anyone’s pocket. 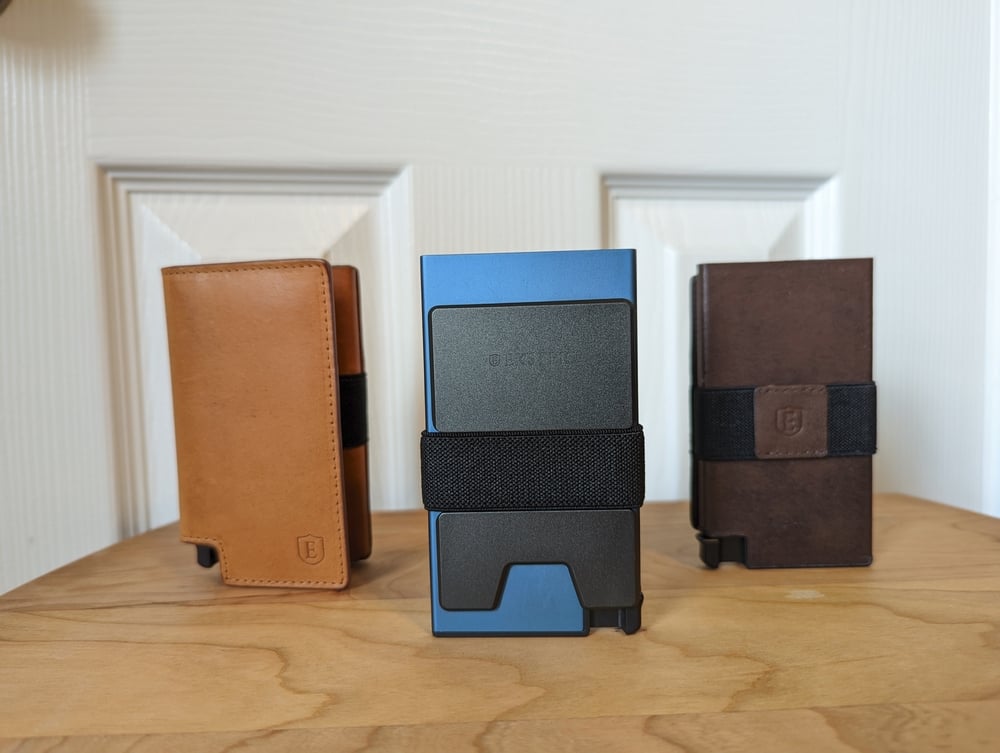 You can get each model in a number of colors and all have several accessories you can add. Head on over to the Ekster website to shop all your options, or we’ve provided direct links to each model below.