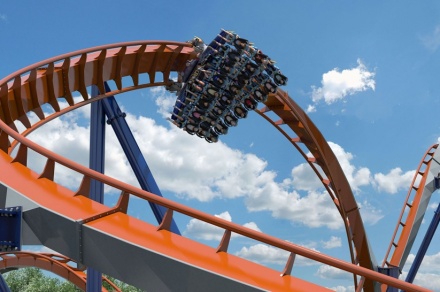 As many of you will be aware, the new iPhone 14 handsets and Apple Watches come with a great new feature that no one wants to ever have to use.

It’s called Crash Detection and automatically alerts first responders if your device detects that you’ve been in a traffic accident. It does this using a new dual-core accelerometer, which can sense a sudden and extreme change in speed that suggests an accident has occurred.

But it appears that some less dangerous things are also activating Crash Detection. Like roller coasters.

Both the Wall Street Journal (WSJ) and theme park specialist Coaster101 have reported how Crash Detection is being set off by roller coasters.

A woman who went on the Mystic Timbers roller coaster at Kings Island amusement park in Ohio told the WSJ that her iPhone 14 Pro automatically called 911 during the ride.

An automated voice call to first responders reportedly said: “The owner of this iPhone was in a severe car crash and is not responding to their phone,” and then gave map coordinates for the woman’s location. Emergency services made their way to the park but soon discovered that nothing was awry.

A Coaster101 reporter who visited the Dollywood theme park in Tennessee spotted a sign for two of its roller coasters — Lightning Rod and Wild Eagle — asking people not to take cell phones and other devices onto the rides. “Due to the dynamic movement you will experience on this ride, Apple Watches and similar devices may activate their emergency call action,” the notice said, suggesting that the Apple device could waste the time of first responders by placing an unnecessary emergency call.

Coaster101 said it posted a tweet about the issue and said it had many replies from people claiming the same thing had happened to them while riding on a roller coaster. A Reddit post on the same matter has also had nearly 180 replies.

When Crash Detection kicks in on an iPhone 14 or one of the new Apple Watches, the owner has 10 seconds to dismiss the alert if it’s not actually an emergency situation, thereby preventing a call being place to first responders. But if the phone is in a pocket or a bag, there’s a good chance the owner won’t know anything about the alert, leading to an unnecessary call being placed.

A spokesperson for the tech giant told the WSJ that the Crash Detection feature is “extremely accurate in detecting severe crashes” and will improve over time. We take that to mean it’ll roll out an update at some point aimed at preventing these false alarms.

It’s possible to temporarily deactivate the Crash Detection feature by turning on Airplane Mode via Settings.

iPhone 14 users can also disable the feature entirely by selecting Settings > Emergency SOS > turn off call after severe crash. On an Apple Watch, take the same steps by starting off in the My Watch tab.