HomeNewsThis new Google Lens feature looks like it’s straight out of a...
News 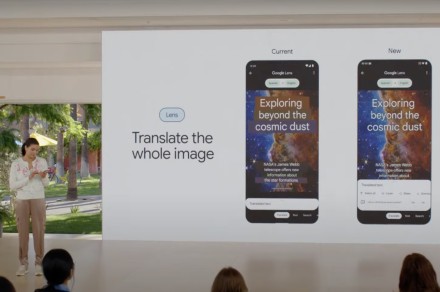 Google has introduced AR Translate as part of a trio of updates for Google Lens that are aimed at taking image translation further into the future. The company held a demonstration at the Google Search On 2022 conference on Wednesday to show that AR Translate can use AI to make images featuring a foreign language look more natural after text is translated to another language.

Currently, any text that’s converted into a different language uses colored blocks to mask bits of the background image. AR Translate better preserves the image by removing the blocks and just swapping the text outright to make the translated image look as though it was the original photo.

What you love about Translating with Lens is now even better. 💡

With major advancements in AI, translated text appears seamlessly integrated, as if it was part of the original picture. Turning text… into context! #SearchOn pic.twitter.com/N8YySv87z1

Google said it optimized the machine learning models so that AR Translate could work in 100 milliseconds. The translation speed is made possible with the same technology Google uses for Magic Eraser, whether you’re trying to translate a screenshot or a poster with the live Lens Camera.

AR Translate is an impressive innovation that looks as though it’s taken straight out of a sci-fi film. People will not only be able to translate the posters they would see at a museum, zoo, or other tourist attraction when they travel to different countries, but one day they will also be able to translate street signs and storefront signs faster than the blink of an eye. Although, we’re not sure if the live Lens Camera will be able to translate signs in which the text is raised, like on building signs. Even so, it’s impressive to see Google continuing to improve one of its most impressive (and helpful) features.

AR Translate will roll out on the Google app later this year.

Google is making Search results more personal, if you want