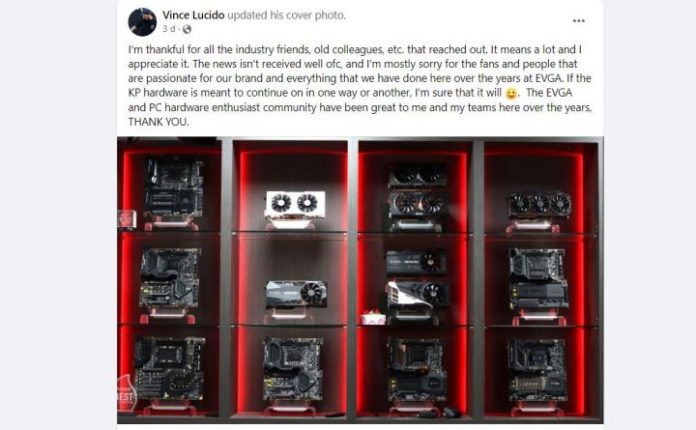 EVGA has made its departure from the GPU market, citing Nvidia as one of the reasons. The shocking end for EVGA, though, has left some of its partners seeking other options.

For example, many have been wondering about the future of the Kingpin sub-brand, and now, it seems that Kingpin is open to other options. Which GPU brand will jump on the opportunity?

When one door closes, a window opens, or so it seems. Last week, EVGA decided to leave the graphics cards business behind, starting an ongoing controversy. Nvidia responded to the situation in a rather reserved manner, and some rumors claim that EVGA had other (financial) reasons to call it quits. One way or another, it left behind some of its collaborators, such as the premium Kingpin sub-brand that specializes in cooling solutions for heavy overclocking.

Vince Lucido, the owner of Kingpin, made a post on Facebook as a response to the EVGA situation. Lucido thanked industry friends and colleagues and then went on to say, “The news isn’t received well, of course, and I’m mostly sorry for the fans and people that are passionate about our brand and everything that we have done here over the years at EVGA.”

In a subtle way, Lucido indicated that the enthusiast brand is open to new adventures, saying that it will continue on if it was meant to. We don’t know about any specifics yet, but there would certainly be some manufacturers that Kingpin could collaborate with in order to target the high-end enthusiast overclocking segment.

As noted by Tom’s Hardware, Asus, Gigabyte, and MSI are the three top contenders here, seeing as all three brands have a strong history of overclocking. Whether this collaboration would include just some of the top graphics cards in the next generation, or perhaps other components too, the potential is there, and Kingpin is open to it.

EVGA has made it clear that it won’t be making its own versions of the upcoming Nvidia GeForce RTX 40-Series, but other brands will, undoubtedly, release custom flavors of the cards that will push the limits a little higher. Perhaps we might see some of these models bear the Kingpin title.