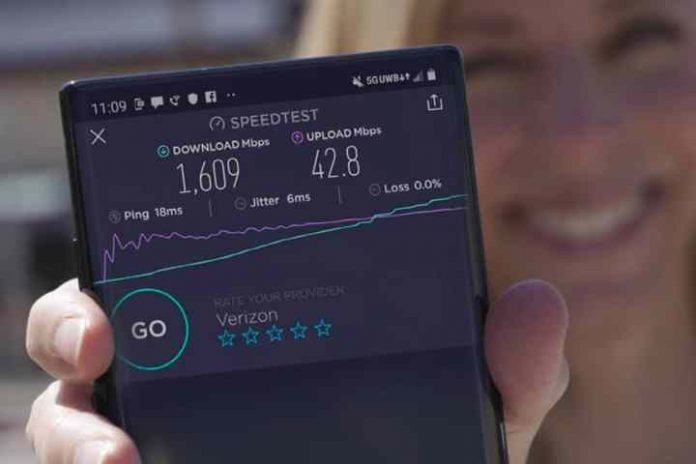 Last week, a report from Ookla revealed that T-Mobile’s 5G and 4G LTE networks are nearly twice as fast as those of Verizon and AT&T. Today, Opensignal released the results of a new study that reveals one of the most significant reasons for T-Mobile’s lead.

5G services cover a much wider range of frequencies than older cellular technologies, each with unique advantages and disadvantages. Since low-band 5G frequencies have considerably more range than higher frequencies and generally share the same airwaves as 4G/LTE services, all three carriers have leveraged this spectrum to provide their extended nationwide coverage. T-Mobile calls this its 5G Extended Range network, Verizon uses the term 5G Nationwide, and AT&T just calls it 5G.

In its latest report, Opensignal collectively refers to these as 5G Enhanced services, and, in an industry first, the mobile analytics firm has set out to quantify the user experience of these premium 5G networks.

As we already know, higher frequencies provide a substantially better experience than low-band 5G. This is partly due to how radio waves work: all other things being equal, lower frequencies are always slower than higher ones. However, the problem is even worse in many cases as these frequencies still carry older 4G/LTE traffic, so the newer 5G signals have to share the airwaves.

What’s notable about Opensignal’s findings is that folks connecting to T-Mobile and Verizon’s 5G Enhanced services experienced similar speeds, even though the carriers use different midrange frequencies. T-Mobile has been rolling out its 5G Ultra Capacity network primarily using the 2.5GHz spectrum it inherited from its merger with Sprint. In contrast, Verizon has deployed its midrange services in the higher frequency 3.7–3.98Ghz C-band that it acquired in an early 2021 Federal Communications Commission (FCC) auction.

This may be one of the reasons that Verizon has an edge in three specific areas: multiplayer mobile gaming, over-the-top (OTT) voice services, and adaptive video experiences. Ookla’s recent second-quarter market report also bore this out. Verizon’s mmWave deployments are also more expansive than its rivals but likely not enough to make a significant difference. Verizon’s early 2022 C-band rollout expanded its 5G Ultra Wideband network to cover more than 100 million people in 1,700 cities across the country; before that, the faster network was only available in the downtown cores of around 82 cities.

Since Opensignal was determined to explore the user experience on premium 5G services, it measured average download speeds on those networks exclusively. This reflects the performance you’re more likely to see if you have a 5G UC (T-Mobile), 5G UW (Verizon), or 5G+ (AT&T) icon showing up on your phone.

The battle for 5G supremacy

This means the primary battle for performance and coverage is being fought in the midrange spectrum. While the carriers are roughly neck-in-neck for speed, Opensignal’s analysis shows that T-Mobile still has a commanding lead when it comes to 5G coverage — a lead that translates to higher median download speeds.

Across the country, Opensignal found that T-Mobile customers could connect to its 5G Ultra Capacity network in 41.9 percent of counties. By contrast, users on Verizon only saw the 5G Ultra Wideband network in 11.7 percent of the same counties. AT&T’s numbers were even more disappointing, with its 5G Plus service available in a scant 1.4 percent of 5G counties.

In other words, if you’re a T-Mobile customer, you’re much more likely to be using the carrier’s best 5G services than if you’re on Verizon or AT&T. That doesn’t mean you won’t get 5G coverage on those other carriers, but it does mean that even if the 5G icon lights up on your phone, you won’t get speeds much faster than on a 4G/LTE network.

T-Mobile’s lead wasn’t just in 5G Enhanced services. Opensignal also found that its customers are much more likely to find 5G at all. At least one type of 5G was available for T-Mobile customers in 88.1 percent of the locations, while AT&T came in second at 69.5 percent and Verizon was in last place at 51.9 percent.

Although these numbers remain widely skewed in T-Mobile’s favor, it’s important to remember that the Un-carrier had a considerable head start in its midrange 5G deployments. While Verizon and AT&T were waiting for the FCC to free up and auction off some C-band spectrum, T-Mobile was already forging ahead with Sprint’s 2.5GHz spectrum in April 2020. That was nearly a year before its rivals could even bid on the midrange spectrum and almost two years before the first C-band rollouts began in early 2022.

However, even though all three carriers bought licenses for chunks of new C-band spectrum, they’ve taken very different approaches. Verizon, which spent $45 billion for its share, began aggressively rolling out the new frequencies as soon as it could. Despite dropping $23 billion in the same auction, AT&T has been far more cautious in its C-band expansion, deploying 5G Plus service to only eight cities, which is why its 5G Enhanced services fared so poorly in Opensignal’s latest analysis.

That doesn’t mean that AT&T is sitting still. As Opensignal notes, the carrier plans to roll out its C-band spectrum later this year as part of a combined deployment that will also take advantage of some new 3.45–3.55GHz spectrum it obtained in a later auction. That project has already begun, but not early enough for it to appear in Opensignal’s research.

T-Mobile also spent around $9 billion on C-band spectrum, but we likely won’t see any wholesale C-band rollouts on T-Mobile. Instead, it’s using the new spectrum to supplement its 2.5GHz 5G Ultra Capacity network, providing a boost in those areas that need it.

Despite T-Mobile’s lead, it’s clear that the new C-band spectrum is changing the game. The question isn’t whether Verizon and AT&T will catch up to T-Mobile, but when it will happen. Since all 5G Enhanced services can provide roughly the same performance, it’s coverage that will continue to be the determining factor in each carrier’s overall 5G performance.

Facebook
Twitter
Pinterest
WhatsApp
Previous articleGoogle Chrome may soon add a security feature it should have had years ago
Next articleThe Galaxy S22 comes in a new color, and it’s a Z Fold 4 and Z Flip 4 teaser
- Advertisment -