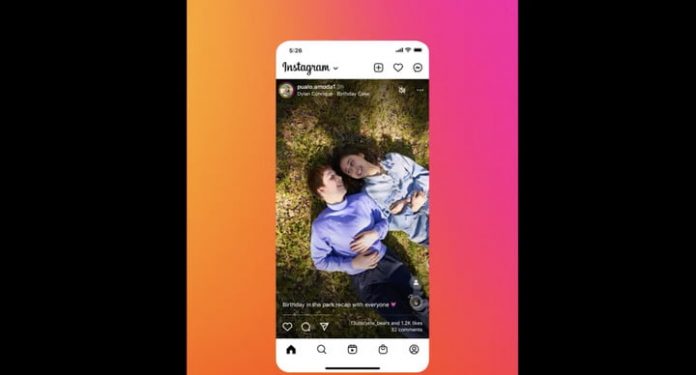 To better compete against TikTok, Instagram is taking influence from a major feature of its rival.

Instagram head Adam Mosseri took to yet another social media platform — Twitter — to announce that the Facebook-owned service will be getting an “immersive” viewing experience in the form of full-screen photos and videos directly in Instagram’s Home feed.

“At the beginning of the year, I talked about how important video and messaging was to the future of Instagram,” Mosseri said in a video clip embedded in his Twitter post regarding the announcement of the immersive Home feed. “We’re moving Instagram to a place where video is a bigger part of the Home experience, where content is more immersive — it takes up more of the screen.”

Facebook’s Instagram chief revealed that the test is starting to roll out this week.

“We know that the future of photos and videos are mobile-first,” he added. “They are 9 by 16. They are more immersive.”

If you’re in the test, check it out and let me know what you think. 👇🏼 pic.twitter.com/dmM5RzpicQ

This would result in taller photos and videos in your Instagram feed — if the testing proves successful. This would be another stark departure from the company’s early days, where photos were displayed in a square aspect ratio similar to Polaroid images.

Instagram is soliciting feedback as part of this test, which should take a few weeks to complete, and the company is asking users to tell it if they love or hate the changes.

Instagram’s mockup, which was shown in Mosseri’s video, did not show Stories or how the company will place Stories, which usually is located at the top of your Home feed. Following TechCrunch‘s reporting of the commission, company representatives confirmed that Stories will remain at the top of your Instagram Home feed.

At the time of publication, I did not see the changes to my personal Instagram experience — launching the app still showed the old Home format, so it may take a while for the new view to show up for every Instagram user.

Prior to the Home feed changes, Instagram was criticized for ripping off its rival’s short video format and rolling it into its own media-sharing experience in the form of Instagram Reels. Both TikTok and Instagram are competing to be the platform of choice for a younger, mobile-centric audience that may not want to view video content as long as traditional YouTube videos. Instead, these shorter “reels” will help creators on Instagram share meaningful, bite-sized video clips with their audience.