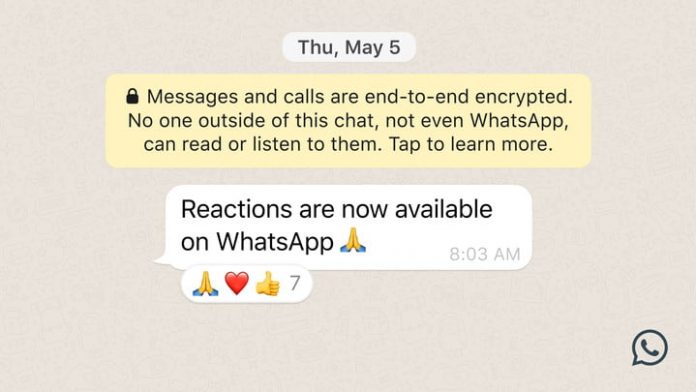 WhatsApp is gaining a slew of new features some would consider overdue for a messaging app of its size. The company is adding support for message reactions, larger file shares, and bigger groups in an update that’s slowly rolling out across iOS and Android. Many of these features are present in other apps, notably Telegram, so WhatsApp is under pressure to keep up.

Message reactions are the most noticeable feature for users on a day-to-day basis. They’re already present on Facebook Messenger, iMessage, Google Messages, Instagram, and Snapchat, so WhatsApp is a pretty late addition. At the moment only a limited number of reactions are present, but the WhatsApp team notes that a broader range of expressions is coming.

Emoji reactions are a quick way to reply to messages that don’t always merit more than an acknowledgment. You may laugh-react at your friend’s joke rather than sending ‘Lol’, heart-react to their engagement announcement, or sad-react to their credit card bill. In group chats they are a lot more useful as, rather than duplicate sentiments and generate dozens of redundant messages, people can simply react to messages.

Other than WhatsApp’s new emoji reactions, the app now has support for enhanced file sharing and larger group sizes of up to 512 members. Larger files up to 2GB in size can also be shared, up from 100MB in the previous version of the app. These two features, in particular, may be evidence that Meta, which owns WhatsApp, is hoping to prevent losing users to Telegram, as the rival messaging service had long since held its more expansive file-sharing support and larger group sizes as advantages over WhatsApp’s more limited offerings.

Facebook’s messaging apps may currently dominate the world, but the company must remain aware of the fates of apps such as BBM and Skype, messaging platforms which once stood at the top before being reduced to also-rans and punch lines. Adding new features that are considered standard in other apps is a must, if only to prevent users from one day gradually, then suddenly en-masse, adopting rivals like Signal and Telegram.