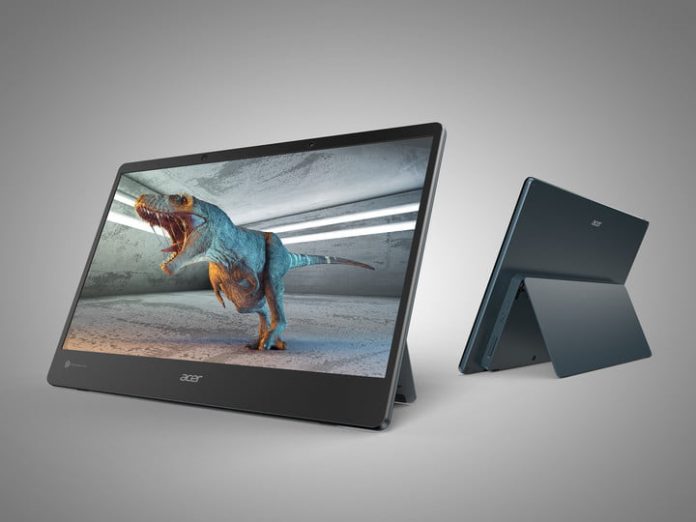 The former is geared toward gamers specifically, while the latter is described as a monitor for commercial audiences such as retailers (for example, kiosks).

Both products are 15.6-inch 4K displays capable of connecting to a PC. Notably, the monitors introduce glasses-free stereoscopic 3D technology for both “gamers and home entertainment enthusiasts.”

As for the monitors’ lightweight design, it weighs less than 1.5 kg (3.3 lbs), which provides a portability element for gamers that allows them to transport it with ease (for traveling, LAN parties, etc).

Acer highlighted the SpatialLabs View’s 100% coverage of the Adobe RGB color gamut as one of its standout features, which is complemented by its ability to deliver 400 nits of brightness.

Some of the other key features of the Acer SpatialLabs View are as follows:

The SpatialLabs View Pro more or less comes with the same specifications, but unlike the standard version, it includes a VESA wall mounting feature (100x100mm). That said, both the View and View Pro offer a tilt/height adjustment/swivel/pivot of +25°.

One downside, however, is the lack of speakers for both monitors.

Alongside the introduction of the pair of standalone monitors, Acer announced SpatialLabs TrueGame, a new application that delivers stereoscopic 3D for a range of games.

“This is possible because games are mostly created with three dimensions in mind: Developers include information about depth into each scene and object they build. SpatialLabs leverages this already-existing information in order to present the games in stereoscopic 3D,” the company explained.

A pre-configured 3D profile will be available for each of the “50+ modern and classic titles” that will be compatible on launch. Furthermore, more profiles for additional titles will be introduced “on a continuous basis moving forward.”

Once the TrueGame application has been opened, Acer stressed that you’ll just need to press the “Play” button, after which the program will do the rest by “automatically launching the necessary game files on a user’s system and activating the title’s associated TrueGame 3D profile in order to boot the game up in Stereoscopic 3D.”

Acer asserted that TrueGame technology is essentially a new way of playing titles due to the ability to view them in 3D without the requirement of glasses.

Gamers will experience “immersion unlike anything players have experienced before. Rooms appear more spacious, objects appear genuinely layered, and adventures become more exciting — all smooth, in real-time, and without the need for special glasses.”

The SpatialLabs View Pro monitor comes with something extra: SpatialLabs Model Viewer, which is aimed more towards creative professionals. Similar to TrueGame, it integrates a 3D stereoscopic feature that supports files created in design apps like Cinema 4D, Revit, and Solidworks. When you open design files in Acer’s SpatialLabs Model Viewer app, they are rendered in 3D without the need for dedicated glasses.

It also boasts an integration with the Blender and Maya apps, where you can edit a file on a regular 2D display and the changes you make will be reflected on the 3D SpatialLabs monitor, all in real time.

As a result, you’ll be able to take photos or videos with your devices. From here, after these assets are loaded onto the system, SpatialLabs Go will generate simulated stereo 3D images.

“Photographs pop off the screen, simple web games become a bit more exciting, and videos (online or offline) take on another level of immersion in real-time.”

The Acer SpatialLabs View (ASV15-1B) is currently scheduled for a launch this summer, with pricing starting at $1,099. Acer did not provide pricing or availability information for the SpatialLabs View Pro.