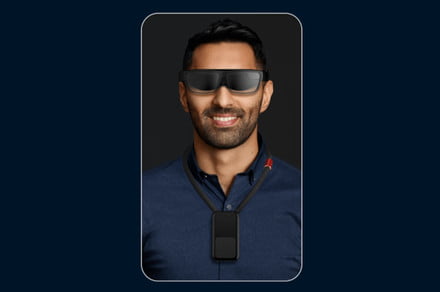 Motorola has introduced a new 5G neckband designed to make your extended reality (XR) glasses and other headsets feel light as a feather.

In a press release posted on its blog on Monday, Motorola said it collaborated with Verizon to design the neckband and engineer it to power lightweight XR headsets, such as the ThinkReality A3 smart glasses from Lenovo. It takes on the appearance of a necklace holding a compact remote control-like pendant equipped with the Snapdragon 8 Gen 1 processor, a 5,000mAh battery, a touchpad, a SIM card slot, speakers, and multifarious sensors like the gyroscope and barometer (via Engadget).

Motorola is still workshopping the official product name for the neckband as of this writing, but it performs all the heavy lifting for XR wearers — literally. It offloads the weight of the XR device of the user’s choice from their head to their neck, transferring the weight of its battery and processor, among other components, to make wearing the headset more comfortable for the user. The ThinkReality A3 smart glasses, for instance, were designed to project five virtual desktops to the user’s eyes to make working from home easier, but because the weight of the glasses adds more strain to the user’s head, the neckband would offset that weight and save them the headache.

Given its peculiar design, the 5G neckband won’t just be for any XR user waiting to enter the metaverse from their smartphone or PC. Verizon’s vice president of device technology, Brian Mecum, noted in his statement that it would potentially be used at businesses such as sports stadiums, theaters, and possibly theme parks for training and entertainment purposes.

The price and release date for the 5G neckband are currently unknown.