Review: Riders Republic on Stadia is an extreme sports playground 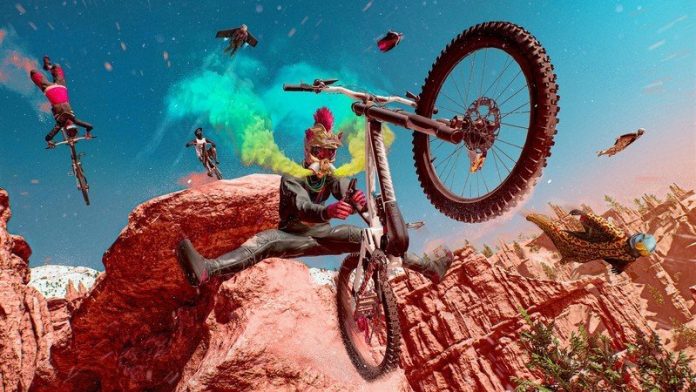 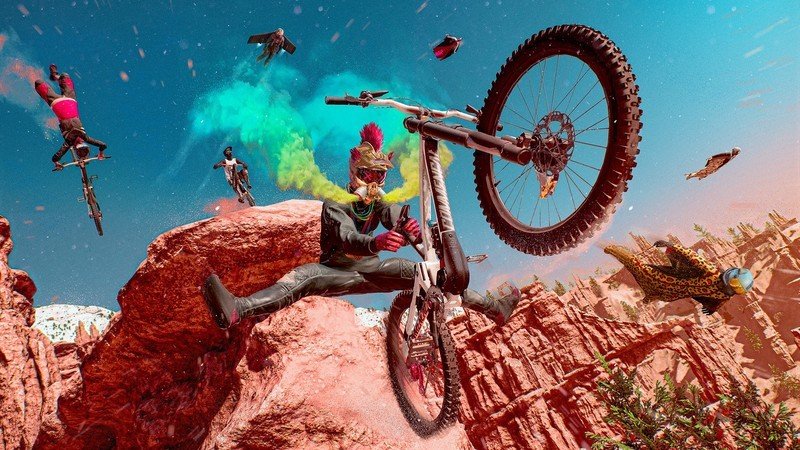 It’s about the journey rather than the destination.

Developer Ubisoft Annecy took the extreme sports theme and lessons learned from its 2016 game Steep and created its own Forza Horizon with Riders Republic. Similar to how Microsoft spun off its main racing franchise, Riders Republic shied away from the austerity of Steep and removed the restraints with more racing options, bright colors, and a never-ending extreme sports festival.

The game also takes a wider approach with how it can be played with a full menu of accessibility options, different ways to progress than simply winning, and cross-platform multiplayer to join up with friends on any hardware. Riders Republic launched on Stadia alongside PC and consoles, though may not be the best version due to some performance choices and the volatile nature of the streaming service itself.

Bottom line: Riders Republic offers fun racing and tricks galore across dirt, snow, and air with a progression system that does not leave you behind in the dust, though the Stadia version may not be the smoothest experience out there.

Riders Republic is a racing game across different extreme sports on the ground, the snow, and soaring through the air within a giant sandbox combining parts of the western U.S. The large map can be traversed with bikes, snowboards, skis, snowmobiles, rocket-powered bikes, wingsuits, and jetpacks. There are fast travel points littered across the map in case an event or point of interest is too far to literally fly yourself there, but exploration is important at the start to de-fog the map, discover more things, simply take in the scenery, or watch dozens of other players speed past you in all different directions.

The various vehicles can reach blinding speeds, especially when careening down a mountain on a bike or flying dangerously close to a mountain in a wingsuit to earn trick points, but are not frustrating to control and feel great when you have a perfect run without any falls. Unfortunately, there is only a first-person camera view and a third-person view with the character centered on the screen that only zooms out when sprinting/boosting.

This was a little troubling as someone who plays racing games with the farthest view from the back of the vehicle. Open and snow areas were no issue, but it meant I missed sudden hairpin turns in low visibility areas. Thankfully, the game has a backtrack feature that rewinds you to a specific point to try again at the cost of some time. The feature also works outside of events and was handy for parachuting onto thin or uneven terrain. That meant flying in circles retrying the landing was not necessary. 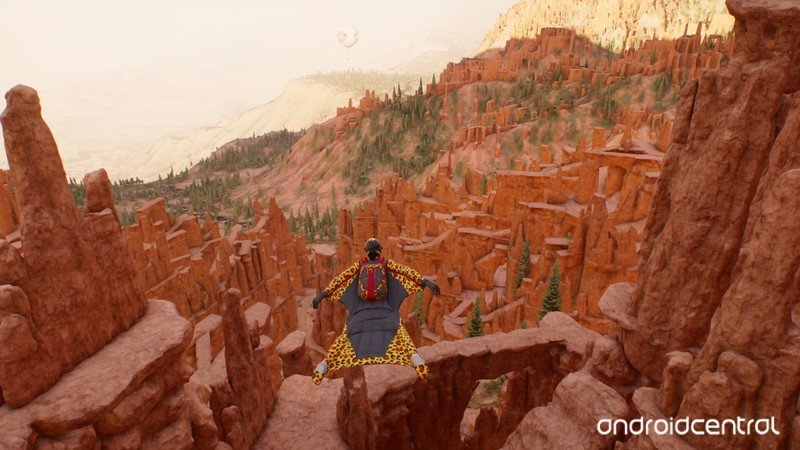 The game’s career mode is very simple to follow. You complete racing and trick events with all the vehicles, and more will unlock. While the dearth of racing options may seem daunting alongside a giant map filled to the brim with icons, the progression is very relaxed and more about honing your extreme sport skills. It’s tied to stars, which are earned by completing events, optional secondary objectives within the events, discovering landmarks, stunt challenges, and more.

The system was shocking to me at first since completing an event for the first time automatically rewards one star, regardless of placement. It felt great not to continually retry the same event for a first-place medal. I could go on to the next event if I didn’t like it or retry to earn more stars through the secondary objectives such as nailing a specific trick or placing in the top three within a certain difficulty.

The game does not discriminate against difficulty either. You can pick one of four difficulties at every event and it only affects your XP gain. XP is used to unlock more gear and currency for cosmetic outfits. Gaming assists like automatically landing tricks and manually grinding also affect XP gain, but I never felt like I was not progressing while playing with all of the assists. 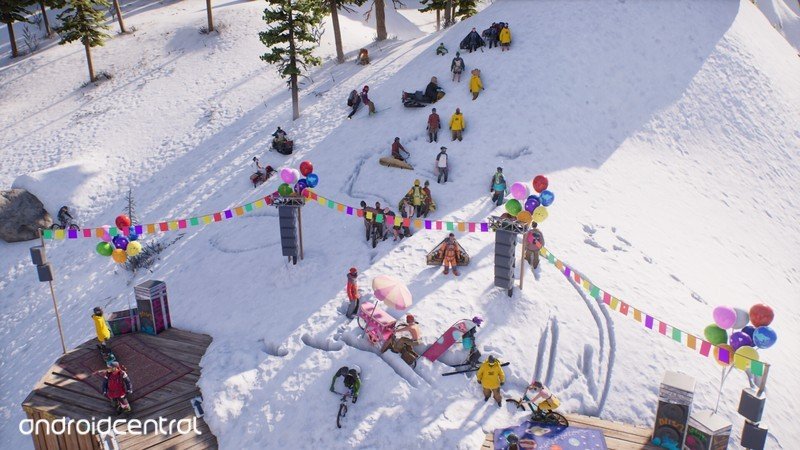 Stars can also be earned in the Mass Race multiplayer events, which take place throughout the day and notify everyone in the game when one is about to happen because up to 64 cross-platform players can participate in one race. These multi-round races can switch between biking, skiing, and wingsuit mid-race. It is chaotic in a fun way to bounce off of over 60 other bodies trying to squeeze through a checkpoint, and you will still earn a decent number of stars even if you place in the 40s.

Other than the main hub, the map is largely untouched by the party-like atmosphere for the best.

The events are plentiful enough that there was always something new to try. I could also retry old events with new gear, or take a break with quick stunt challenges and discover landmarks across the map that also reward stars. The progression system really shows that there is no rush since the milestones cap out at 7,000 stars, and it only requires 750 stars to unlock the final Riders Ridge Invitational mega event.

The premise of Riders Republic is to work your way through the ranks of extreme sports to reach the Riders Ridge Invitational in this festival-like setting. Other than the main hub, the map is largely untouched by the party-like atmosphere for the best. It is nice to be somewhat alone on top of a mountain and not deal with the small cast of characters that use words that I’m not sure are actually words and awkward interactions. They fade into the background after the introduction and can be largely ignored when they pop up occasionally. 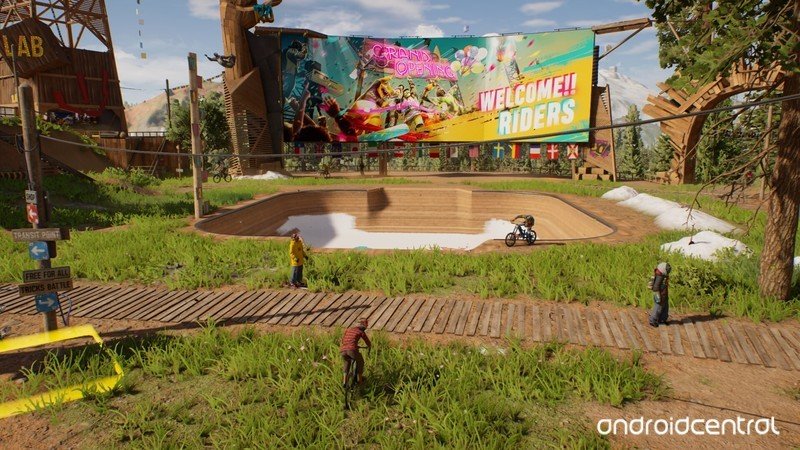 The game does feel like a giant party as dozens of other players’ ghosts populate your screen as you explore. You never feel quite alone unless playing the game’s progression-disabled Zen mode.

Fly high enough to see white person-shaped icons strewn below you, or access the map screen to watch hundreds of those icons traveling down specific paths like ants in a maze. It is not a very useful feature, since event and landmark icons are already displayed in the world, but it’s absolutely mesmerizing to watch. 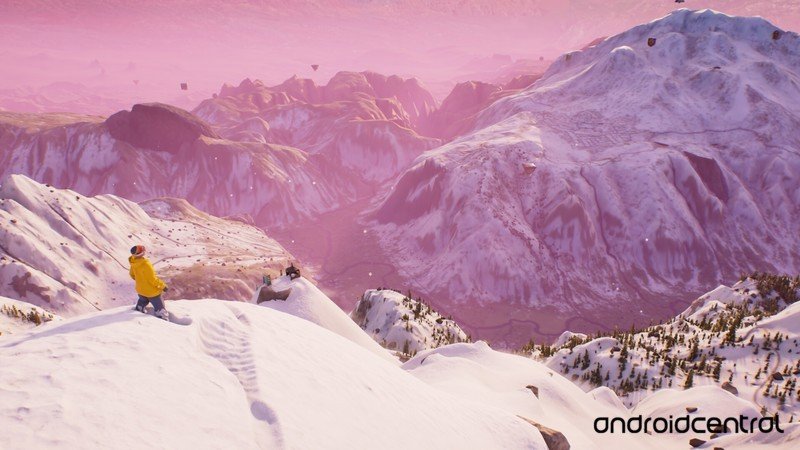 I had no performance issues or crashes with Riders Republic on Stadia, nor did I notice any glitches. Unfortunately, the Stadia version only runs at 30 FPS. In comparison, other versions on next-gen consoles allow you to play the game in 4K at 60 FPS.

This isn’t the smoothest framerate for a fast racing game, but it’s perfectly serviceable unless in a heavily forested area. Speeding down a forest path made turns difficult amongst the blur of brown and green, even with motion blur turned off. You also have to factor in your internet connection, which could impact performance if not fast enough.

Thankfully, Stadia offers a two-hour free trial of Riders Republic to try before buying at full price or subscribing to Ubisoft+.

Riders Republic: Should you buy it? 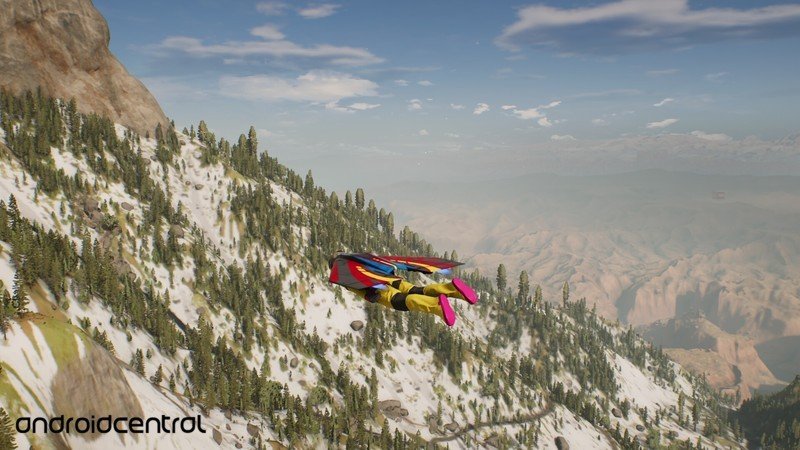 Riders Republic is a racing game that offers extreme thrills while letting you go at your own pace. The progression never feels stifling if playing on the lowest difficulty, and rewards you for trying everything at least once. It is a sandbox to play around in, whether you enjoy finding a challenging dirt path, soaring through the air in a wingsuit made of cardboard, or shooting straight up a mountain in a rocket-powered bicycle.

It’s overall a great game to play if you’re into racing games without cars. Best of all, you can play with friends across any platform thanks to cross-platform multiplayer. It may be one of the best Stadia games, but is hard to recommend at its launch price if you own a capable PC, PlayStation 5, or Xbox Series X|S to ensure the smoothest experience.

Bottom line: Riders Republic on Stadia may not be the smoothest ride, but it offers fun racing and trick events across dirt, snow, and air with an easy-to-understand progression system.