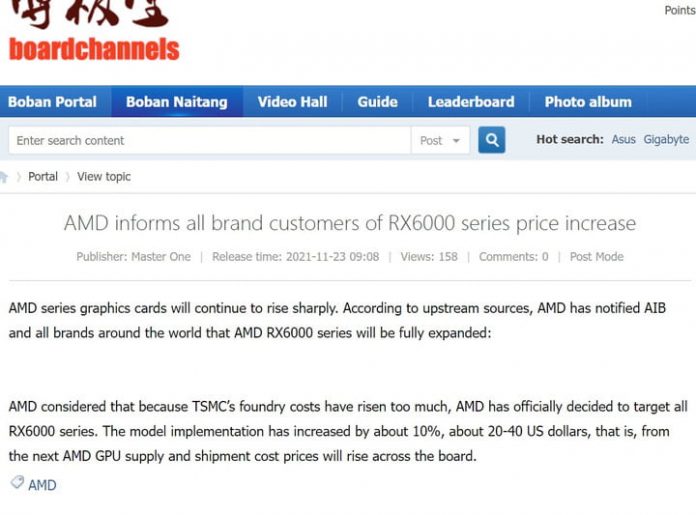 AMD could be increasing the price of its RX 6000 graphics cards for add-in board (AIB) partners. A post in an AIB forum reports that AMD is raising the price for partners by 10%, citing issues with manufacturing costs, and that extra cost could be passed on to customers.

The post comes from the BoardChannels forum (via VideoCardz). It says that RX 6000 prices are up 10% across the board, which represents anywhere from a $20 to $40 increase in price per GPU. This is the price increase for AIB partners, so it doesn’t necessarily mean all RX 6000 GPUs will become 10% more expensive suddenly.

They could, though. A recent report on the GPU market found that Nvidia and AMD graphics cards are still selling for more than twice their list price, despite relatively stable supply over the past few months. YouTube channel HardwareUnboxed looked into pricing changes on the secondhand market between October and November, and it found an average 9% increase for AMD RX 6000 GPUs.

According to the BoardChannels post, the price increase will come with the next shipment of RX 6000 graphics cards. Partners could start increasing prices now, or it could take a few weeks. It’s also possible that partners don’t raise their prices at all, though that seems unlikely given the trend of GPU prices over the past year.

The cause of the increase comes down to manufacturing costs at chipmaker TSMC. RX 6000 graphics cards are based on TSMC’s N7 manufacturing process, which is the same node that AMD uses for its Ryzen 5000 processors. Right now, it doesn’t seem like prices on processors are increasing, despite using the same node. In fact, many Ryzen 5000 chips are discounted ahead of Black Friday.

AMD hasn’t confirmed the price increase. We’ve reached out and will update this story when we hear back. Unfortunately, we’re dealing with closed-door conversations between AMD and its board partners, so we may never know if the price increase martializes.

The GPU pricing crisis continues to get worse. Prices are up across the board, and companies like Nvidia continue to warn that supply issues will persist until the end of 2022. It could be a year or more before the GPU market returns to normal, and it has already been a year since the GPU shortage began.