Realme GT Master Edition review: Don’t sleep on this one 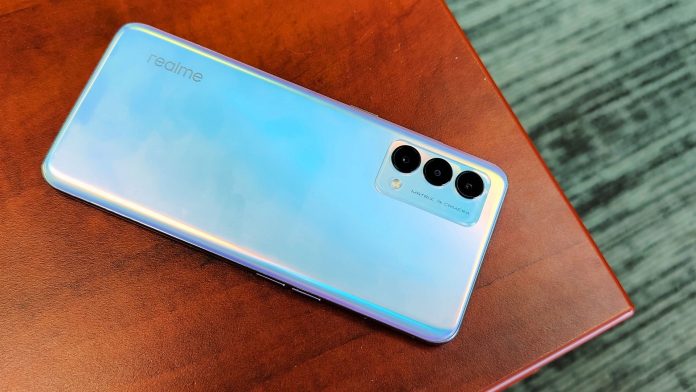 If you live in the United States, chances are pretty good that you’re unfamiliar with the realme brand, but that is for good reason. For starters, it has not been around all that long, having just gotten started in the smartphone space barely three years ago.

More importantly, realme has not made any grand overtures for the US market just yet. Average consumers have yet to see the name pop up in their daily lives. Those who watch the industry closer may have seen the brand making headway across the globe as it has become the fastest phone maker to hit 100M units sold.

In short, realme is an up-and-coming brand that could soon position itself in the conversations that once included the likes of Google Nexus and OnePlus. That is to say it offers an incredibly robust hardware suite with a modern version of Android and a price that’s damn near irresistible. 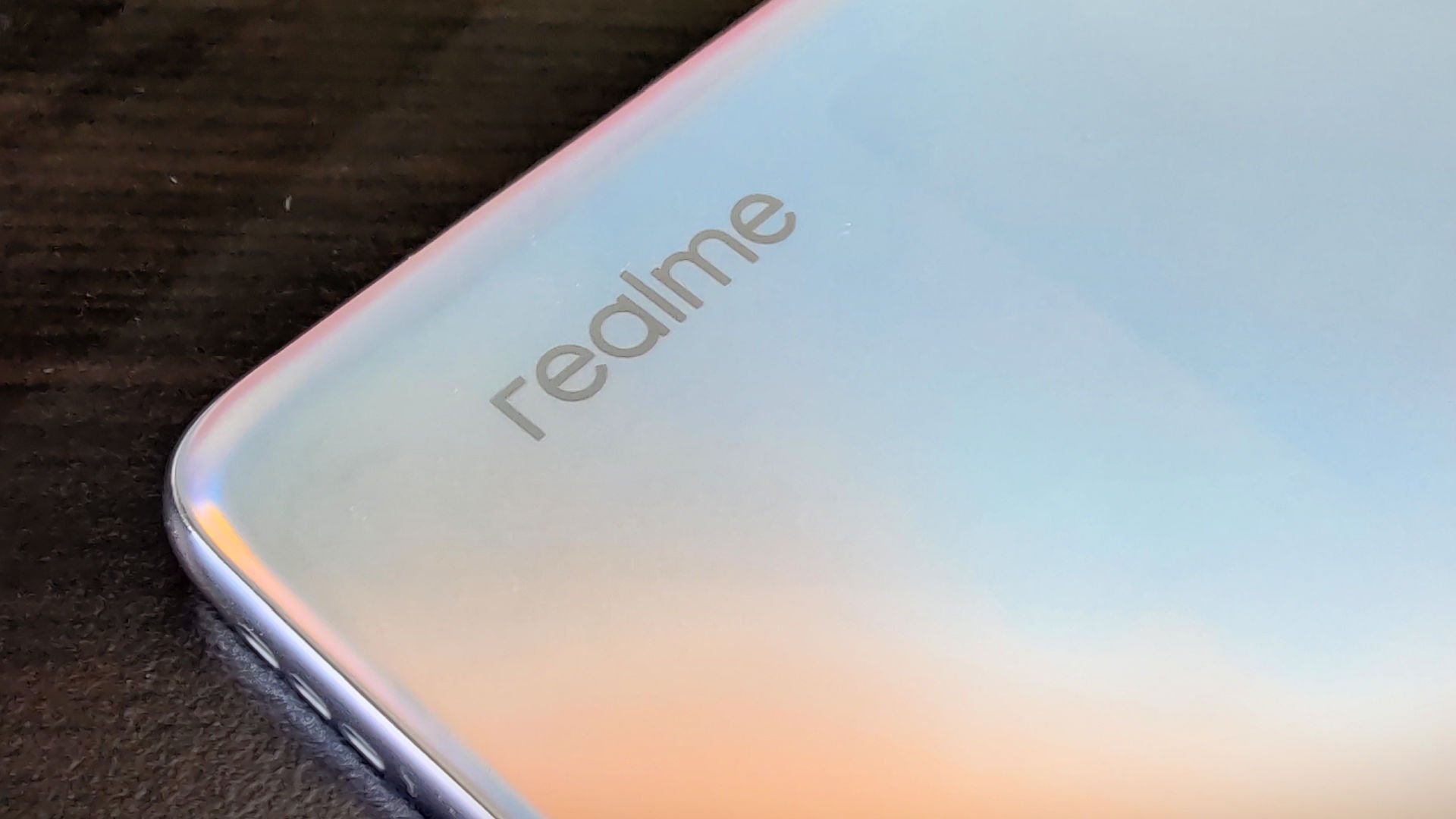 We were fortunate enough to receive a review unit of the company’s latest handset, the GT Master Edition. Putting it through a solid set of paces over the past few weeks, I’m confident in offering up the following review.

What is the GT Master Edition?

Despite its name, the realme GT Master Edition isn’t exactly a premium version of a flagship experience. When other brands use “Plus” or “Pro” to denote the high-end approach to a series, this one is better aligned with a junior flagship model.

If we were to split phones into three tiers, we have the low, middle, and high end. If we were to go with five, then the realme GT Master Edition would occupy the space between middle and high.

Available in two options, the phone can be had with 6GB RAM/128GB storage and 8GB/256GB storage capacities with pricing at $400 and $450, respectively.

What is it like to hold the realme GT Master Edition? In short, it’s a treat. Sure, to hold, but maybe even more so to look at. Our review unit was Daybreak Blue which could be better described as a cotton candy-like color that dances between sky blue, pink, and silver. Although it’s not comprised of glass or metal it has the appearance of a more expensive device.

The phone is thin and light and very easy to operate with one hand. As someone who doesn’t have large hands, I appreciate that today’s phones are thinner and taller than in years past. 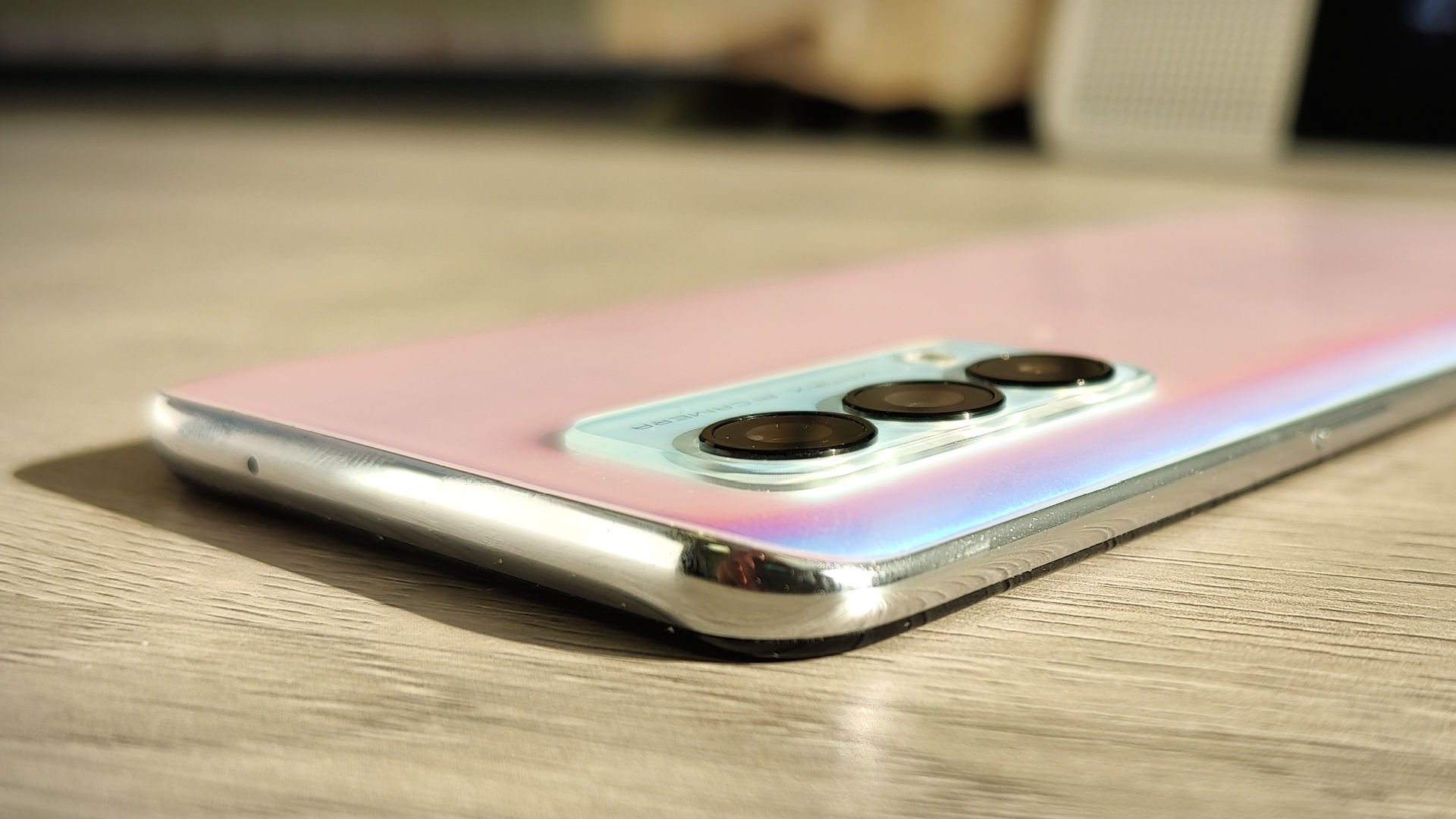 Button placement and general configuration are as expected with the power on the right side and volume rockers on the left side. The USB Type-C port is located on the bottom with a 3.5mm headphone jack — yep, that’s present.

The rear has three cameras in the module on the top left; they’re stacked in a single row with a flash to the right of the bottom camera. The front-facing camera is found in the top-left hole punch. As for finger print readers, the realme GT Master Edition features one in the display.

The 6.43-inch Samsung AMOLED screen is a good size that feels smaller in hand than one might expect. Moreover, its 120Hz refresh rate makes games and video feel very smooth and fluid.

The realme GT Master Edition is powered by a Qualcomm Snapdragon 778 processor with no less than 6GB RAM and 128GB storage. That is to say it has more than enough under the hood to handle daily tasks, messaging, photos, and more.

I’ve thrown a decent amount of games on the phone so far, playing off and on a few times each day. I’ve not seen any signs of performance issues, but do we ever see them in the first couple of weeks?

The 4,300mAh battery is fairly generous and pairs well with the processor, meaning it lasts quite a long time and doesn’t burn itself out. When it comes to charging, the 65W SuperDart tech promises up to 50% in just 13 minutes. Fell asleep without charging? You’ll be just fine if you throw it on the charger while getting ready for school or work.

I don’t mind that there’s no wireless charging because I’ll get through quite a bit of day before I care enough to charge up. And when I do, plugging in over lunch is more than enough to give me confidence in a long night of gaming and social media.

What kind of software does the realme GT Master Edition run? Android 11-based realme UI 2.0 gives users a clean experience that’s not all that far off from a stock Android.

Things are light and lively with plenty of customization settings that can make for a very personalized interface. If you like to tinker a bit or change things up every so often, you’ll enjoy what’s on offer. Be it icon styles, gestures, general layout, handling of notifications or something else, you’ve got plenty of space to play around. Leave it alone, though, and it’s pretty close to what you get from a Pixel or something from Motorola or Blu.

Our review unit came with a handful of pre-loaded apps and games, some of which were promptly removed. Among them were PUBG Mobile, Netflix, LinkedIn, WPS Office, and Soloop. Also, there were a few titles for things like Music, Compass, Videos, Weather, and Photos.

A Game Space app lets users add games and apps to a list of titles that can be optimized for performance. In other words, it tunes the hardware settings so that your phone gets the best experience.

Switch between Low Power, Balanced, and Pro Gamer modes which dial CPU, GPU, and Signal strength up at various levels. Hate getting notifications or interruptions when playing? Toggle those settings and you’ll be good to go.

How does the realme GT Master Edition camera experience fare? In a couple of words, not bad. Generally speaking, pictures come out sharp and vibrant but will sometimes result in a color temperature that doesn’t quite capture the real world.

On a rare occasion I noticed that images felt warmer than they should have been while other times they came out a tad dull. Lighting is always the key and it’s hard not to compare results to other phones. That is to say a head-to-head with a Pixel isn’t exactly fair if you’re looking at portrait shots.

If most of your pictures are taken outside or in bright light, you should be quite pleased with the overall results.

We appreciate having multiple cameras to play with even if we don’t really ever use the macro lens. A few close up shots of a flower or other items is often all we ever do and it’s just to kick the tires. The ultra-wide camera is fun to have and helps to tell a different story when capturing an outdoor scene.

All in all we were pleased enough with the pictures that the realme GT Master Edition produces. Even though we may occasionally run them through an app for editing or touch-up, we don’t mind the overall experience. And considering the price of the phone, we never expected that much to begin with.

Is the realme GT Master Edition a good phone? You bet. I’ve had a lot of fun using this one particularly because it fits in my hand well and looks pretty sharp. I hate hiding it behind a case because the blue is so attractive and unique. 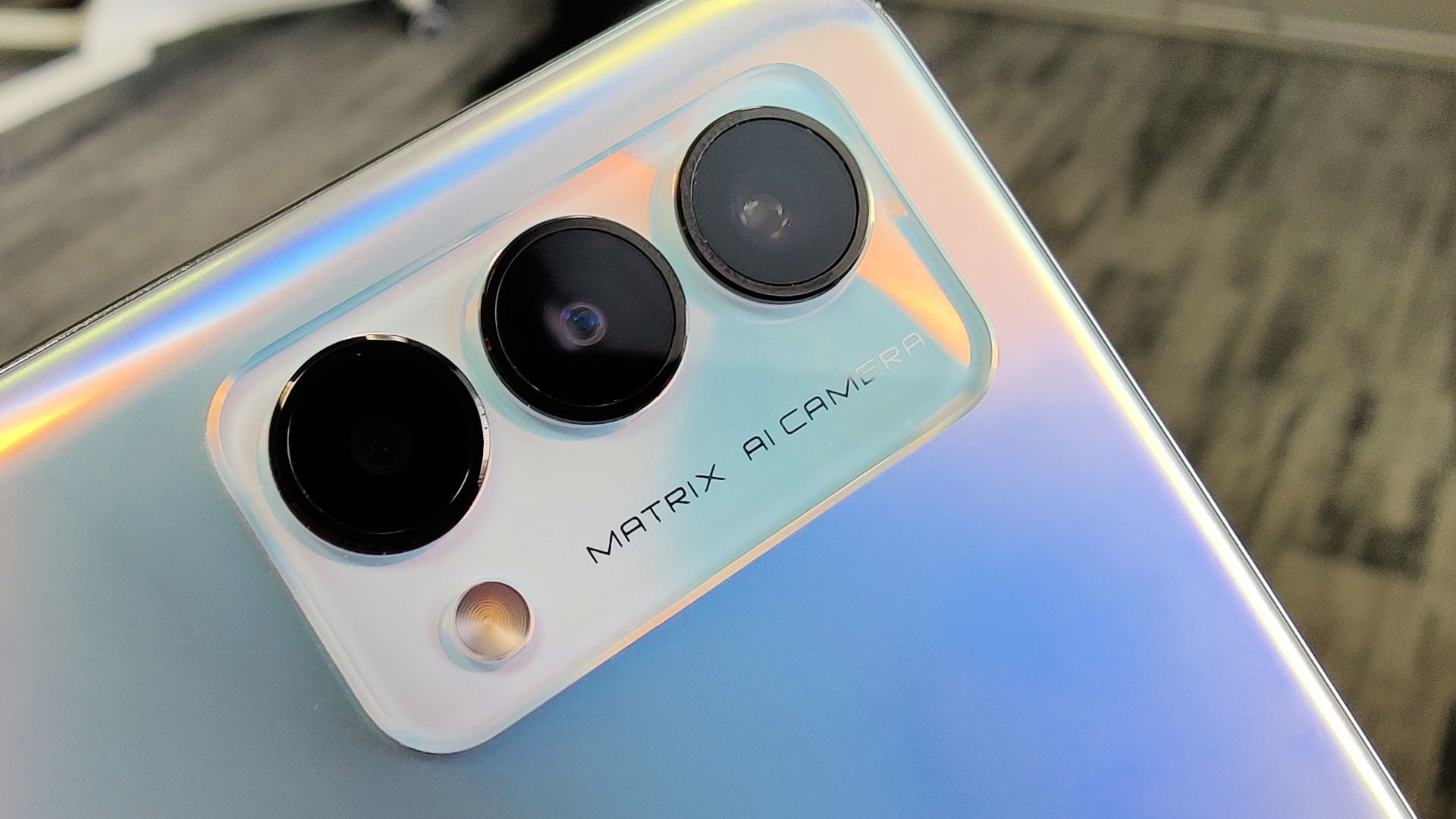 As someone who is content with pretty much any modern mid-range phone, I could see myself using this one for a long time. There’s plenty of hardware under the hood to handle my needs and I suspect that will be the case for another year or more.

The camera experience is not great but it’s serviceable enough that I can use it in my day-to-day life. I’ve always kept a Pixel phone around specifically for the point and shoot experience. If I know I’ll need to grab some nice pics of family or friends, then I lean on the Google line. On a day to day basis, I’ve been more than happy with the pics for social media and sharing.

I’ve used the realme GT Master Edition with my Google Fi account for the last few weeks and have had no major issues. I spend much of my day on Wi-Fi so I’m not overly concerned with network speeds. With that said, it’s definitely worth noting this is more or less a 4G handset in the United States. I experience around 7Mbps download speeds when out and about which has been fine for my needs.

The realme GT Master Edition is an unlocked phone with 5G connectivity, but it is limited. According to Amazon listing of the device, it has the following networks and band support for 5G. 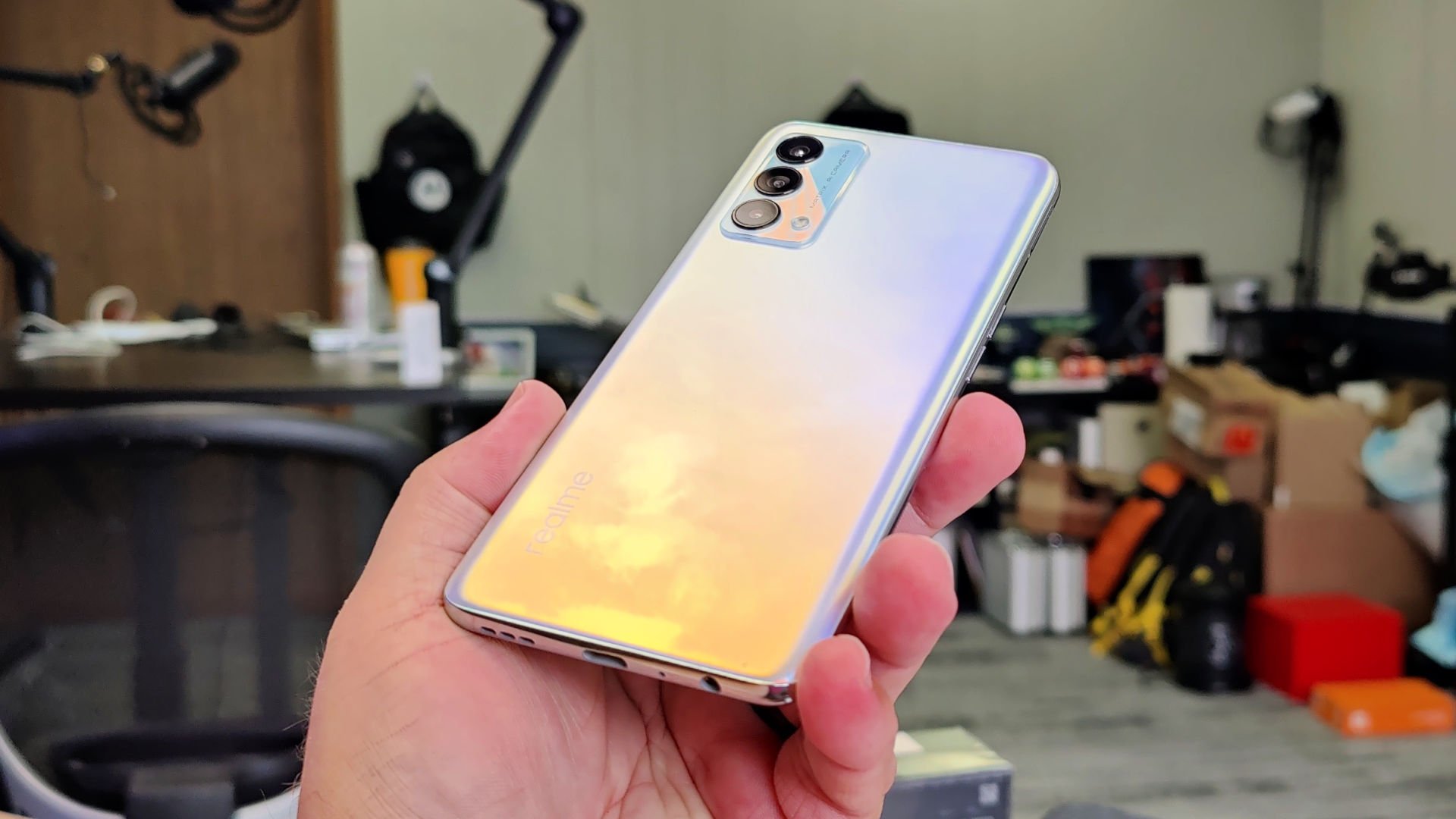 You can learn more about the realme GT Master Edition at realme’s various international websites. If you head to realme.com from the US, you won’t see it listed on the global page. Switch over to UK or another market and there’s plenty of information to be had.