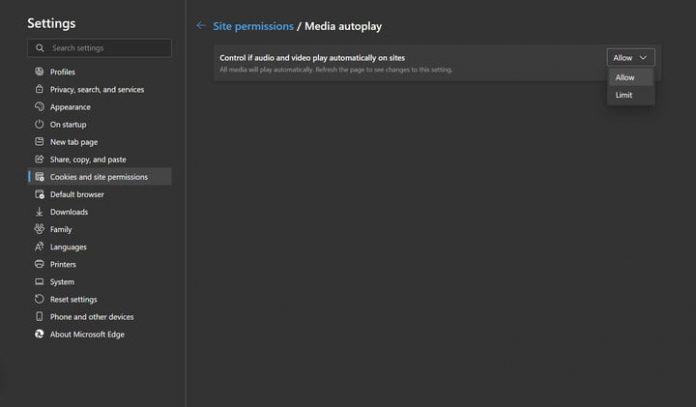 Ever go to a webpage in Microsoft Edge only to have a video start playing in the background without your permission? Microsoft has heard those pains, and starting in Edge version 92, will change a settings toggle by default so that by default, you’ll no longer be annoyed.

The news is highlighted in the Microsoft 365 roadmap, as pointed out by TechRadar. In that road map, Microsoft mentions that Edge version 92 will help you keep your focus online by changing the default for auto-playing media to “Limit” from “Allow.” The page also mentions that the feature is rolling out now, so if you’re in the Beta or Dev and Canary beta channels and beta testing preview versions of the browser, you might already be seeing this change applied.

Although this setting will change by default in Edge version 92, you can still change the toggle on other versions of the browser (including the current version 91) manually right now. Just search for Media on Edge’s settings page, and then clicking the Media autoplay button at the bottom of the page. There will then be a drop-down box for Limit.

This is just one of many features that have rolled out to Microsoft Edge since its initial release in early 2020. Microsoft has also added other features such as a new Kids Mode, vertical tabs, Collections, and even Windows 11 design elements. Even the performance has improved, with Microsoft introducing features like Sleeping Tabs, and Startup boost, designed to help the browser run faster and more efficiently — but also save memory.

And it’s all working in Microsoft’s favor. The old version of Microsoft Edge struggled with performance, was linked to Windows 10 featured updates, and had fallen behind with features when compared to Google Chrome. The new version of Microsoft Edge, however, has pushed forward, surpassing Firefox as the second most popular web browser in the world. It’s now on the same release cycle as Chrome and always seeing big improvements.