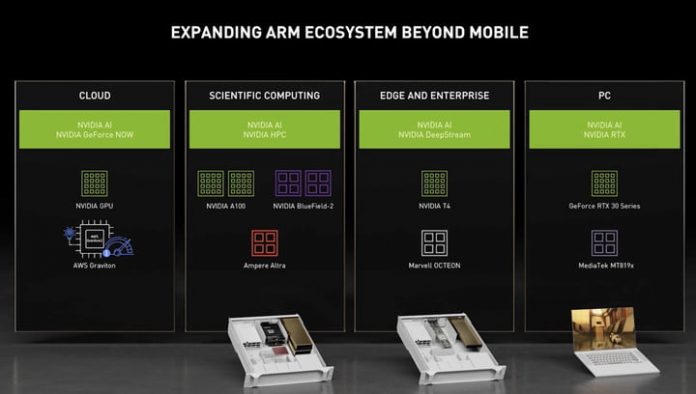 At Nvidia’s GPU Technology Conference, CEO Jensen Huang announced that the company was working with industry partners to make its graphics technology more widely accessible. Specifically, Huang mentioned that it is looking to bring its GeForce GPU graphics technology to ARM-based processors that are popular on Chromebooks today.

“We’re announcing a partnership with MediaTek to create a reference system and SDK for Chrome OS and Linux PCs,” Huang said during his keynote presentation at GTC while highlighting the power efficiency and popularity of ARM processors due to their open licensing model. “Combining Nvidia GPUs and MediaTek SoCs [systems on a chip] will make excellent PCs and notebooks.”

He added that MediaTek is the world’s largest SoC maker.

Though Nvidia didn’t offer additional details about the partnership, an ARM-based MediaTek processor coupled with Nvidia’s GeForce RTX technology will have the power to potentially supercharge smartphones, tablets, Chromebooks, Linux PCs, and even future Windows on ARM releases. With more graphics power headed to ARM processors, we could begin to see more games and creative apps on more devices, operating systems, and form factors. This could even make serious gaming a reality on Windows on ARM systems.

Nvidia rival AMD is also eyeing the ARM processor market. AMD is said to be partnering with Samsung to potentially bring its Radeon graphics technology to Samsung’s ARM-based Exynos processor.

With Nvidia’s GeForce GPU — and even AMD’s Radeon GPU — headed to ARM, this could have the potential to disrupt Intel’s tight grip on the processor space. Apple has already migrated away from Intel silicon, opting to forge ahead with its custom ARM-based M1 processors for the Mac that are coupled to its own graphics solution.

Nvidia’s support for ARM shouldn’t come as much of a surprise, given that the company has announced its acquisition of ARM from Softbank in a deal valued at $40 billion in cash and stock.

Nvidia also announced its Grace data center CPU, also based on ARM, that would couple the processors with Nvidia’s GPUs. Nvidia is still awaiting regulatory approval for its acquisition of U.K.-based Arm.