HomeNewsNvidia leak shows next-gen GPUs could be five times as powerful as...
News 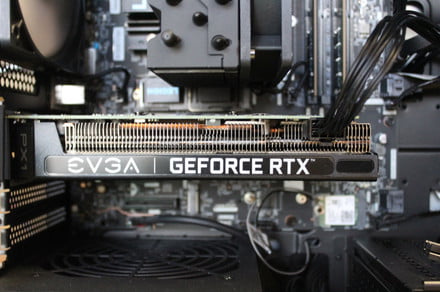 While gamers are still struggling to get their hands on Nvidia’s latest GeForce RTX 3000 series graphics cards based on the Ampere architecture, Nvidia is already hard at work on the successor to the flagship RTX 3080. Powering the company’s next-gen GPU is a new architecture known as Hopper, and a recent leak reveals that the company’s next graphics card refresh will come with a brand-new design that packs in more than 100 billion transistors.

The information about Hopper comes from Nvidia CEO Jensen Huang, who shared a few slides with Wccftech ahead of Hopper’s full reveal. From those slides, we now know that the architecture supports a total of 100.1 billion transistors, nearly a fourfold increase from the 28 billion transistors supported on the flagship GeForce RTX 3080 today.

Another big change for Hopper is that it will use a new multichip module, or MCM, design, allowing Nvidia to pack multiple dies on a single package for even better graphics performance. MCM designs have been used on processors in the past by rival AMD, bringing more cores to Ryzen processors. With Hopper, Nvidia is adopting a similar strategy for graphics by using an internally developed J-Stack technology to allow the stacking of multiple dies in a multidimensional approach.

This would allow Hopper to support 42 graphics processing clusters per die, and since Hopper has two die, we’ll have a total of 84 GPCs. Each GPC houses four streaming multiprocessors with 128 CUDA cores, so there will be a total of 336 SMs and 43,008 CUDA cores. This is up from the 68 SMs and 8,704 CUDA cores currently supported by the flagship RTX 3080 today.

So how powerful is the new Hopper? According to Wccftech, if Nvidia is able clock the GPU at 1,700 MHz, the new card can achieve 146 TFLOPs of power. For comparison, the RTX 3080 reaches only 29.7 TFLOPs, so the raw performance power of the new Hopper-based GPU architecture is roughly five times what’s capable today. And as an additional point of comparison, Microsoft’s Xbox Series X can reach 12 TFLOPs of power, while Sony’s PlayStation 5 is rated at 10.28 TFLOPs.

And even though we don’t have confirmation on how many tensor or RT cores will ship with Hopper, the GPU is said to be theoretically capable of processing a fully ray-traced game in 1080p, scalable to 4K with DLSS enabled. For memory, it looks like this card will ship with a massive 48GB of memory. Nvidia is using HBM4 memory standard for this card. The RTX 3080 ships with just 10GB of GDDR6X memory.

Right now, pricing information is not yet known. The RTX 3080, for example, has an MSRP of $699, though the card is fetching double or triple Nvidia’s asking price on secondary markets because of how lucrative these cards are to scalpers and cryptocurrency miners amid a global semiconductor shortage. To combat crypto miners hoarding the new Hopper cards, Nvidia is believed to be partnering with the Epic and Steam online stores to ensure gamers will get first crack at its new GPUs. According to Wccftech, the company will require an aged Epic or Steam store account, so gamers with accounts less than two years old won’t be able to purchase the new card.