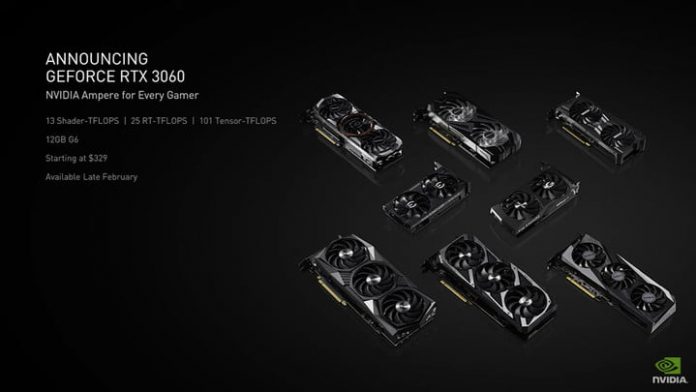 Given that gamers have been unsuccessfully competing against cryptocurrency miners for GPUs amid a shortage of graphics cards, Nvidia is making some changes that will make the entry-level GeForce RTX 3060 less attractive to miners.

Don’t worry, pricing for the base graphics card in Nvidia’s RTX 3000 series remains the same, but Nvidia is limiting the hash rate of the RTX 3060 to make it less appealing for use as a miner.

“With the launch of GeForce RTX 3060 on February 25, we’re taking an important step to help ensure GeForce GPUs end up in the hands of gamers,” the company wrote in a blog post, noting that “we designed GeForce GPUs for gamers, and gamers are clamoring for more.”

The limits on hash rates will be controlled by Nvidia’s GeForce software drivers, which will detect when the card will be used for Ethereum mining. Once the drivers detect that a mining algorithm is in play, Nvidia claims that it would limit the hash rate, which would then limit the mining efficiency for cryptocurrency by approximately 50%.

“That only makes sense,” the company said in defending its solution. Nvidia claims that it is applying smart driver-based limits to the hash rate only when it detects mining algorithms to make the gamer-designed GPU less attractive to cryptocurrency miners and give more gamers and creatives a chance to be able snag the $399 graphics cards if they desire. “Our GeForce RTX GPUs introduce cutting-edge technologies — such as RTX real-time ray tracing, DLSS A.I.-accelerated image upscaling technology, Reflex superfast response rendering for the best system latency, and many more — tailored to meet the needs of gamers and those who create digital experiences.”

Nvidia’s latest move is good news for the gaming community, as we’ve seen pre-order pricing for the RTX 3060 already skyrocketing ahead of the card’s February 25 availability. The desktop GPU was initially announced earlier this year during Nvidia’s CES 2021 presentation, and it will come with the same Ampere architecture and second-generation ray tracing core design found in Nvidia’s other RTX 3000 series GPUs.

In addition to solidifying the RTX 3060 as an arsenal for gaming, Nvidia also announced a new Nvidia CMP card, which stands for Cryptocurrency Mining Processor. Without a dedicated cryptocurrency mining card, miners were turning to dedicated gaming GPUs to do the work, but with the new CMP card, Nvidia hopes that miners will have a powerful tool to do the task and leave the GeForce RTX cards to gamers.

The CMP cards aren’t designed for graphics, Nvidia claimed, and the CMPs also lack display outputs. This helps to improve airflow and cooling while mining, and the design is intentional to allow the cards to be densely packed together in a mining rig.

“Creating tailored products for customers with specific needs delivers the best value for customers,” the company stated. “With CMP, we can help miners build the most efficient data centers while preserving GeForce RTX GPUs for gamers.”

Nvidia’s CMPs will be sold through authorized partners, though the company did not disclose how much these mining-specific cards will cost.