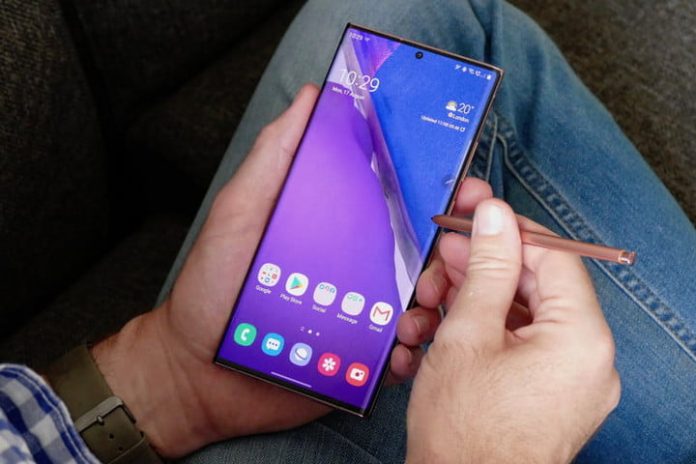 Big is beautiful, especially when it comes to Samsung’s late-model smartphones. Take, for example, the company’s newly announced Galaxy S21 Ultra. It improves on its predecessor in several major areas, including updated software, a refreshed design, 5G as the standard, and the latest Qualcomm Snapdragon 888 processor. Even so, it’s not without competition. Consider last year’s Galaxy Note 20 Ultra, whose message is similar — go big or go home. Both Galaxies have more power, more features, and more advanced tech than their predecessors — all aimed at improving productivity and boosting media capabilities. So how does last year’s top Note compare with today’s top S21? Here’s what we found.

The main difference between the new Galaxy S21 Ultra and the Galaxy Note 20 Ultra is the identifiable design. The Note 20 sports a rectangular shape with sharp corners, and it runs wider than the Galaxy S21 Ultra, which looks a bit more chunky but has a narrower form factor and rounded corners. The S21 Ultra has an inherent advantage as the newer unit, with the highest brightness up to 1,500 nits for optimal viewing and better color rendering in direct sunlight.

Both devices support QHD resolution for sharp detail, but the Note cannot use the 120Hz Dynamic fast refresh rate at the maximum resolution, while the S21 Ultra can. That said, the 120Hz refresh rate is dynamic on both models, so it only appears if needed, while the rest of the time the phones run at a lower refresh rate to conserve battery life. The S21 Ultra’s updated camera styling is sophisticated and elegant as Samsung’s new design now integrates the camera pod right into the frame for a more natural look. In contrast, the Note’s camera module is huge and protruding despite its elegant design.

The competition is close, and so much depends on your taste and how you use your phone, but the Galaxy S21 Ultra edges out the Note 20 Ultra by a thin hair.

Newer phones nearly always take the performance advantage, and the Galaxy S21 Ultra, which ships with the new Snapdragon 888, promises to deliver superior performance compared to the older Snapdragon 865+ on the Note 20 Ultra. Another advantage is the newer 5nm manufacturing process used to build the newer phone facilitates more transistors and better performance without power consumption taking a commensurate hit.

While both phones have a base storage of 128GB, only the Note 20 Ultra has a MicroSD card slot, something that the S21 Ultra surprisingly does not. To compensate, the S21 Ultra offers models with 256GB or 512GB of native storage. Both phones support all current 5G bands including mmWave or UWB on Verizon, but the S21 Ultra has a 5G modem built into the chip, which also conserves power and boosts data speed.

Because the superior chipset delivers better performance, and almost everything else is comparable except for the MicroSD card slot, and despite the charger as an add-on expense for some, we give the nod to the Galaxy S21 Ultra.

Samsung did a lot of work on its S21 Ultra mobile camera. For starters, the S21 Ultra revisits the 100x zoom, which it had previously reduced to 50X for the Note 20. It debuted a new 10X zoom native periscope lens, the longest zoom ever for a Galaxy phone, and it uses this camera combined with an intelligent digital zoom to reach 100X. Samsung also includes a 3X zoom telephoto lens with both telephoto cameras offering critical optical image stabilization. These features make the S21 Ultra a superior zoom camera. Also, the S21 Ultra’s main camera is wider, shooting at 24mm rather than the standard 26mm, delivering a different perspective.

There are also improvements to video recording. It now supports a laser auto-focusing system to improve focus. It enables 8K video recording at 30 fps, and can capture high-quality screen grabs from that footage. While not discounting the quality and styling of the Note 20 Ultra camera, at the end of the day, it is less flexible and powerful than the newer phone.

Both the Galaxy S21 and the Galaxy Note 20 now run One UI 3.0, Samsung’s skin for Android 11, so they have nearly identical software and features. They’re also likely to get updates at roughly the same rate, and while the S21 Ultra will probably get one more version of Android, that’s a while away. So, tie.

Here’s a new one: For the first time, an S series phone supports the S Pen, though not as naturally as on the Note 20 Ultra, which not only ships with the pen but has its own slot for the pen. While the pen is kind of a novelty for the S21 Ultra, it’s an add-on that requires a separate purchase and a special case. It’s unclear what the demand is for the pen for this model, but it’s nice to have the option — though if you do want one, you’ll have to shell out even more money. The best part about the Note 20 Ultra line is that every phone comes with the same stylus, so it’s easier to find a way to integrate it into everyday use. However, there are other things the S21 Ultra does not ship with — like a MicroSD card slot and the charger, both of which the Note 20 Ultra does have.

Both the Samsung Galaxy S21 Ultra and the Note 20 Ultra support both main 5G bands in almost all the territories where they are sold.

The S21 adds a couple of smaller new items like the camera’s Vlogger View, which allows you to capture video with both front and rear cameras simultaneously, and the Director View, offering thumbnails of the feed from the S21’s different camera lens.

With a built-in (and free!) S Pen, in-box charger, and MicroSD card slot, the Note 20 Ultra comes with pretty much everything the Galaxy S21 Ultra does and a little extra. It’s the winner here.

The world has emerged from one sad, unstable year and entered into another, so price variations matter. For 2021, Samsung dropped its flagship phone price by $200 — though again, it did remove the charger from the box. The Samsung Galaxy S21 Ultra 5G rings in at $1,200 for 128GB model, $1,250 for 256GB, and $1,380 for 512GB, available on January 29. The Samsung Galaxy Note 20 Ultra 5G retails for $1,300 for 128GB, but discounts are available from some retailers that may make the price more competitive.

Because prices are roughly comparable, while at the same time the S21 Ultra starts at a lower price and offers several options based on your storage needs, but forces optional purchases, we call a tie.

It’s still early days for the Samsung Galaxy S21 Ultra, and without actually reviewing the new phone, it’s hard to say which is the better phone for you. The winner here is based on comparative technical specs and worthwhile extras and incentives that the company offers. The Galaxy S21 Ultra and the Galaxy Note 20 Ultra have many features and capabilities in common, and given that you may be able to obtain the more expensive model at roughly the same price as the new one, which is better is a matter of personal preference.

In choosing the Galaxy S21 Ultra as the better phone, we base the decision on the updated processor, brighter display, superior camera power and design, and more powerful battery, so if it’s the best overall phone you want, then choose the new S21 Ultra. If you’d rather the in-built S Pen, then choose the Note 20 Ultra.