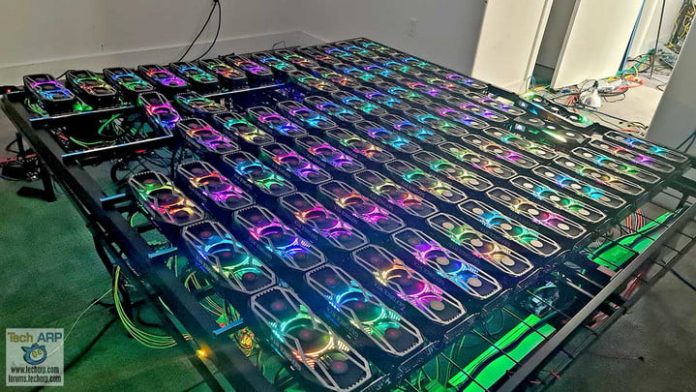 While many gamers have so far been unable to upgrade their GPUs to Nvidia’s latest flagship graphics cards due to shortages — a situation that even forced company CEO Jensen Huang to make a public apology — it appears that one Bitcoin miner managed to secure 78 GeForce RTX 3080s.

Pictured in a photo that has been widely circulated on social media, the mining rig — named Berta 2 and created by Simon Byrne — is shown with its illuminated. colorful RGB backlight, according to reports on VideoCardz and Tech ARP.

The mining rig is reportedly able to generate approximately $20,000 of income each month in Ethereum currency. Based on current pricing for Ethereum, each graphics card, according to Minerstat data, can generate approximately $6.35 to $9.15 per day, including the cost of electricity. Tech ARP estimated that it costs $1,444 per month just to power Byrne’s rig — and that’s not accounting for cooling costs — based on rates in Las Vegas, where he resides. As a whole, Byrne’s system can generate between $15,000 and $21,000 in income on average each month.

Still, 78 units of Nvidia’s GeForce RTX 3080 flagship graphics cards come at a hefty cost, and the rig itself is valued at an estimated $100,000. Each graphics card has a starting price of $699, and custom variants cost more. This means that it will take on average about half a year for Byrne to break even and begin generating revenue.

With the fluctuating exchange rate for cryptocurrency, the return on investment could take significantly longer than half a year.

Are cryptocurrency miners to blame for the shortage?

Byrne — and by proxy, Bitcoin miners — alone may not be the sole reason why GPUs have been in high demand and short supply. Nvidia executives have cited the unprecedented demand due to situations created by the ongoing health pandemic that is forcing more people to work, learn, and keep entertained at home. To do so, they’re turning to technology, like stronger processors and video cards, to fuel their productivity and entertainment needs.

Nvidia’s theory, and its supply shortage, was shared by rivals, including AMD, which also experienced shortages of both its recently launched Ryzen processors and its Radeon graphics cards. Despite retailers’ best attempts to restock Nvidia’s GPUs and AMD’s CPUs and GPUs, these PC parts quickly sell out. When the cards initially launched, scalpers using bots were blamed for wiping out the very first batches of inventory.

Though AMD has been less vocal about the cause for the shortages, Nvidia Chief Financial Officer Colette Kress recently said that shortages in the company’s supply chain — widely believed to be shortages of GDDR6 memory — are also contributing to shortages for graphics cards.

Though the RTX 3080 and the enthusiast-class RTX 3090 rely on more advanced GDDR6X memory, Nvidia’s other RTX 3000 series cards and AMD’s recent Radeon cards use the GDDR6 standard. Kress speculated that the shortage will last until the early part of this year.

Cryptocurrency miners aren’t without blame. Prior to the launch of AMD’s Radeon RX 6000 series and Nvidia’s GeForce RTX 3000 series cards, Bitcoin miners were often blamed for wiping out GPU supplies. The shortages angered gamers and dedicated Nvidia fans so much that Huang had to address the issue during a media session at the company’s GTC conference in 2018, noting that cryptocurrency mining “is not our business” while simultaneously declaring that Nvidia stands with gamers.

““We’re not involved in Bitcoin at all,” Huang said. “Bitcoin [mining] is done largely by ASICs today.”

Despite distancing himself from controversy, Huang didn’t shy away from promoting the strength of the GPU over ASICs or even the CPU.

“The reason why the GPU is so popular with Ethereum is because the GPU is the single-largest distributed supercomputer in the world,” he said. “It is the only supercomputer that is literally in everyone’s hands. And as a result, no single entity can control currency.”

At the end of the day, demand for GPUs is soaring because they generate money. For creatives and gamers, GPUs are an integral tool, while Bitcoin miners find that the investment can often pay off.