HomeComparisonLenovo vs HP Laptops: Which Is the Better Brand?
Comparison

Lenovo vs HP Laptops: Which Is the Better Brand? 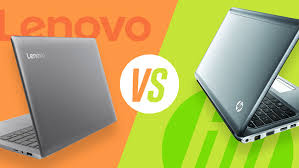 Did you know that Lenovo and HP control about half of the global notebook market? In fact, for many years now, the match has always been between Lenovo vs HP laptops.

All in all, Lenovo and HP have been competing for the number one spot as the world’s biggest PC vendor. However, Lenovo has consistently outranked HP for three straight years now.

The only time within the last five years that HP climbed to the top was in 2017. Back then, HP ended the year with a market share of 21%, beating Lenovo by a mere 0.2%.

So, which of these two should you choose then? Is Lenovo really a good brand, or should HP be your next buy?

To help answer all these questions, we decided to come up with this comparison guide. Read on to learn more about these two PC makers and their products so that you can make a smarter buying decision.

Lenovo Group Limited, also known as Lenovo, is a Chinese corporation. According to www.Lenovo.com, the company started with only a team of 11 Chinese engineers. Since then, it has expanded its reach to 160 countries.

However, before it became known as “Lenovo,” it was first incorporated as “Legend” in Beijing back in 1984. It then officially became Lenovo after its incorporation in Hong Kong in 1988.

Today, you’ll find the multinational technology company’s global headquarters in Beijing. However, it also has an operational HQ in North Carolina. On top of this is the company’s major operational center in Singapore.

As a leader in computing technology, Lenovo specializes in personal and business computers. These include desktop computers, laptops, smartphones, workstations, and storage devices.

The Chinese corporation is also a Fortune Global 500 company, ranking 224th in the 2020 list. As of the most recent fiscal year, Lenovo’s market value has reached $7.24 billion. It also employs about 63,000 workers throughout all the markets it serves.

The “HP” in HP Inc. stands for Hewlett-Packard. These two names are from the company’s founders: Bill Hewlett and David Packard. They started the now-giant tech brand in a one-car garage in Palo Alto, California, back in 1939.

HP’s first-ever product wasn’t a computer, though: it was an audio oscillator. The company only started manufacturing computers in 1966. Today, HP Inc. develops, sells, and repairs personal computers, printers, and related devices.

From its humble beginnings, HP has grown to become a Fortune Global 500 company. It places higher than Lenovo, securing the 184th spot in the 2020 list. It has a market value of almost $25.14 billion, although its total 2019 FY revenue was $58.75 billion.

In the third quarter of 2020, Lenovo claimed 25.7% of the global computer market. It sold approximately 18.31 million computers during this timeframe alone.

Within the same period, HP’s global market share was only 21.6%. Moreover, its PC shipments only totaled 15.447 million units. This means that Lenovo sold over 2.8 million more computers than HP.

Lenovo vs HP Laptops: Which Has the Cheapest Laptop?

Both Lenovo and HP have some of the most affordable budget laptops in the market. However, HP wins when it comes to having the cheapest-priced unit. This is in the form of the HP Chromebook Clamshell, the price of which starts at $199.99.

With laptops ranging from as low as $214 to as high as $6,919, Lenovo is undoubtedly the winner in this category. You also have more than 300 various Lenovo models to choose from. Some are for everyday use, others are for business purposes, and many are for students or gamers.

HP also boasts of an extensive list of laptops, consisting of over 250 different models. That’s a lot, but not as broad as Lenovo’s product line. As for prices, HP’s products have a cost range of between $199 and $5,039.

Lenovo’s entry-level laptop for gamers is the IdeaPad Gaming 3, with a starting price of $799. It’s has a pretty nice 15.6-inch display screen, capable of rendering Full HD resolution. It comes equipped with an AMD Ryzen 5 Hexa-core processor.

HP has a similarly priced product, which is the HP Pavilion Gaming Laptop – 15t-dk100. It also has a 15.6-inch Full HD display screen. Unlike Lenovo’s Hexa-core, however, this one uses an Intel Core i5 quad-core processor.

The Pavilion Gaming Laptop’s base model comes with an 8 GB DDR4 memory. You also get 256 GB of SSD storage, plus 1 TB of SATA and 16 GB Intel Optane memory.

With that said, Lenovo’s offer beats HP’s in terms of processing power. However, HP wins when it comes to extra memory-related features.

If you plan to play more power-intensive games, the Lenovo IdeaPad Gaming 3 may be your better bet. However, if you want a faster laptop in general, then you may want to consider the HP Pavilion.

Lenovo offers far more deals and bigger discounts than HP. With Lenovo, you’ll find discounts of as much as 70% from the original web price. The company often runs these deals during the holidays, but it does have weekly or monthly promos, too.

As for HP, discounts only range between $50 and $200. That’s still a lot, but not as massive as those offered by Lenovo. So, even if HP does have lower-priced items, you may be able to find a better deal if you go with Lenovo.

When to Go With Lenovo

The Lenovo ThinkPad series offer excellent options for those who need multi-purpose laptops. They pack enough power that makes them capable of complex creation-related tasks. That’s why they’ve become a mainstay in many businesses and even in IT departments.

The Lenovo ThinkPad product line itself has been around for almost three decades now. 2017 marked its 25th year of existence. It was also then that it reached its milestone of having sold 130 million units since its inception.

Aside from the ThinkPad, you have 300 other Lenovo models to choose from based on your budget. As mentioned above, you can get a brand-new Lenovo for just a little over $200. However, if you need something more suited for work, then you can go with the T14 laptop that costs less than $800.

You should also consider going with Lenovo if you need a 2-in-1 laptop. While it wasn’t the first to launch a 2-in-1 line, its ThinkPad X220 Tablet PC was the first to receive top reviews. Since then, the company has been improving its 2-in-1 lineup, so you can’t go wrong with a Lenovo convertible.

When to Choose HP

HP excels in a lot of areas, one of which is affordability. For less than two hundred bucks, you can get yourself a new HP laptop! Of course, your new gear would be very basic, but if you’re on a super tight budget, then HP is the way to go.

HP also appears to do a little better than Lenovo in terms of battery life. The HP Elite Dragonfly, for instance, outlives all of Lenovo’s longest-lasting laptops. So if long battery life between charges is an important factor for you, then HP may be your better choice.

If you’re choosing between an HP and a Lenovo gaming laptop, your better bet may be the HP Omen. Some of the Omen models come with i9 processors, while most of Lenovo’s Legion units only run on an i7 processor. You can also configure some of the Omen units with up to 32 GB of RAM.

Making the Right Choice Between Lenovo and HP

There you have it, your comprehensive comparison guide to Lenovo vs HP laptops. As you can see, Lenovo and HP are both excellent choices, each with their own pros and cons. HP has more products at lower prices, but you can get a more powerful Lenovo laptop if you have a bit more budget.

Ready for more geeky guides and hacks like this? Then be sure to check out our site’s other technology reviews and blog posts!