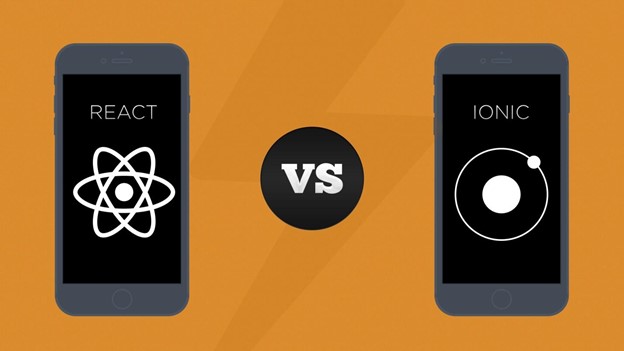 With the proliferation of programming languages and frameworks, you may find it hard to decide on the right option. But when it comes to designing effective and relatively inexpensive mobile apps, developers often choose between React Native and Ionic. So, React Native vs. Ionic… Which one is the best fit for your project?

If you want your business to succeed in the Digital Age, you need to use all the opportunities and advanced technologies. With so many e-business models at your disposal, you can quickly move your entrepreneurial venture online, upgrade your business, or explore new horizons. More and more business owners choose to develop mobile applications to reach out to a wider audience, boost sales, and increase their revenue. You might be eager to scale your business with the help of an effective and well-designed mobile application, too. But you also should be aware of the pitfalls, hardships, and challenges that may arise on the road towards the realization of your plans. Therefore, you should build cooperation with experienced software engineers who know everything about building business apps. Professional developers can quickly help you pick the right programming language for your unique app and decide between React Native and Ionic. Meanwhile, you may want to familiarize yourself with the main features of each of these tools.

React Native is a JavaScript framework that allows developers to create native-like applications for the most popular mobile platforms: Android and iOS. The reasons why so many developers opt for Reactive Native lie in its flexibility and universality. The framework allows utilizing a single codebase for Android and iOS platforms. It saves much time and costs that would be otherwise spent on writing two different native mobile apps.

React Native allows using JS code along with iOS and Android platform capabilities. Software engineer uses JavaScript code primarily, however, 10-15% of native code may be required to fit your app for different mobile platforms. Hiring React Native engineers, make sure they are familiar with Java/Kotlin for Android development and Swift for iOS development.

Ionic is an open-source SDK for hybrid app development. It was built as a mix of Angular JS and Apache Cordova. Similarly to React Native, it utilizes the JS-based codebase to build features for apps designed for Android or iOS devices. But unlike its React counterpart, Ionic has no native components at its disposal. Thus, the app’s UI and performance may differ on different devices. Your project might lack the overall native feel inherent in React Native apps.

The speed of the apps built with Ionic also can be a bit inferior to those built with React, which native elements can give your product a more native look and feel. However, development speed is impressive: with Ionic, you can launch a simple minimum viable product in just a few weeks.

With React Native, developers don’t usually experience any problems accessing a device-specific user interface. By eliminating the need for web views, the framework can quickly communicate with a device and thus spare you the bother of creating additional code layers. As a result, you can create a high-quality product boasting exceptional performance. But note that to use React Native to the fullest, you should be familiar with JSX and React.js.

Still, with React Native’s debugging tools, it’s possible to reduce the number of possible inconsistencies and crashes during the application development process. Still, to get the most out of its debugging potential, you’ll need to install an emulator. The ease-of-use is another reason why so many programmers opt for React Native. It features an easy-to-access native library and default downloadable code fragments that can be specifically adapted to a mobile platform and used for creating advanced app features.

Ionic is a simple tool that allows you to carry out the debugging process right in a browser. Nevertheless, it won’t be able to offer you as high visibility as React Native. Ionic cannot compete with React in terms of performance and core functionality.

Ionic doesn’t boast as rich an ecosystem as React, but still can be used for creating a wide range of software apps.

Ionic development is a more versatile and cheaper option than React Native development. It’s easy to learn and implement. After installing Apache Cordova plugins, you’d get an opportunity to add components from other ecosystems.

So, Ionic or React Native?

Deciding between React Native and Ionic is a difficult task that requires much consideration and carefully weighing all cons and pros. But both frameworks are designed to cater to different business needs and pursue different purposes.

Ionic app development cost may be slightly lower in comparison to React Native development price. Define your budget, set your goals, and pick the framework that meets your needs best.