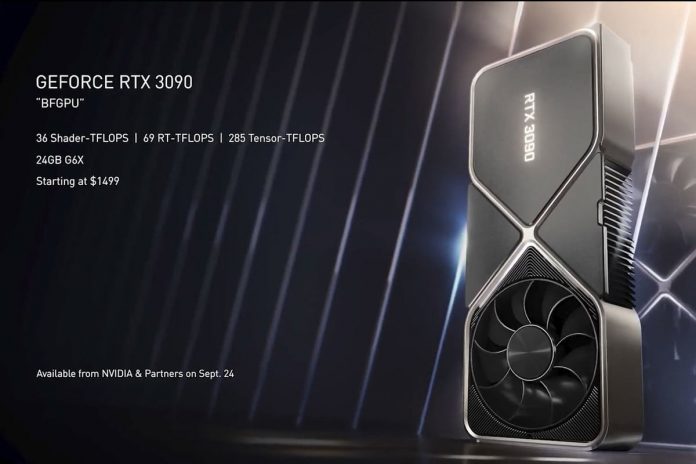 Nvidia’s next generation of GPUs is here. The new Ampere architecture promises a significant performance improvement, and Nvidia is making some ambitious claims about its potential for consumers and gamers.

The RTX 3090 and RTX 3080 sit at the top of the stack, and are both extremely powerful cards. But they’re also some of the most expensive consumer cards Nvidia has ever produced. From performance to features to price, here are our thoughts on how the two compare.

These prices and release dates are for Nvidia’s Founders Editions of the cards only, with no news as of yet of what to expect from third-party alternatives or when they will be available. If last-generation Turing cards are anything to go by, however, we may see some that are slightly cheaper, with others that are vastly more expensive, depending on the cooling solution and factory clock speeds.

Although Nvidia hasn’t addressed the possibility directly, it seems the 3090 is set to replace the Titan RTX. The specs certainly line up with that. Nvidia’s top-line Ampere GPU comes with a massive 24GB of GDDR6X memory, matching the Titan RTX. The RTX 3080 is more conservative with 10GB of GDDR6X, but both cards offer improvements in memory speed and bandwidth over the last gen.

Although Nvidia didn’t provide any reference benchmarks for the RTX 3090, it did offer some lofty claims about performance. According to Nvidia, the 3090 can deliver 60 frames per second (FPS) at 8K with DLSS on. The card’s 24GB of memory is on display here. The RTX 3090’s 10,496 CUDA cores don’t look as impressive next to the 3080, especially considering the 3090’s price. However, compared to last generation, both cards simply have more raw computing power.

The RTX 3090 should offer the greatest improvement at high resolutions. Most games will hit over 60 FPS at 4K with the 3080, at least according to Nvidia’s benchmarks and the spec sheet. As display resolutions push higher, though, the 3090 will always have the edge when it comes to rendering at native resolutions.

The RTX 3080 and 3090 both have higher power draw compared to the last generation. The cards draw 320W and 350W, respectively, on the reference design, supported by dual PCIe 8-pin connectors. Nvidia recommends 750w of total system power for both cards. Although higher than the last gen, both cards are surprisingly reasonable. The RTX 3090 is downright impressive. It only draws slightly more power than the 3080 while delivering significantly higher specs across the board. Both cards are functional up to 93 Celsius, which is up from 89 Celsius compared to the last gen.

Nvidia’s new thermal design looks promising, too. Both cards come with a dual-fan design, one on each side. According to Nvidia’s model, the bottom fan will draw air from the back of the case while the top fan will draw air from, well, the top. This new design should help air more easily pass through the case, but again, we’ll need some hands-on time with each card.

The self-proclaimed “BFGPU,” the RTX 3090 is much larger than the 3080, sporting a triple slot design compared to the 3080’s dual-slot one. That could translate to better thermal performance at higher clock speeds, but we’ll need benchmarks to draw any firm conclusions.

Ray tracing and DLSS are at the core of the 3080 and 3090. Nvidia’s redesigned RT cores deliver up to 2x the performance of Turing with ray tracing turned on. Compared to last gen, both cards deliver higher frame rates with ray tracing, and combined with DLSS, higher resolutions.

To take advantage of either card’s ray tracing abilities, you’ll need to play one of these games with ray tracing.

Although 4K is the focus right now, both cards support 8K with three HDMI 2.1 ports and a lone DisplayPort 1.4a connection. Nvidia’s benchmarks show the 3090 reaching over 60 FPS in games like Apex Legends and Destiny 2 at 8K with ray tracing and DLSS.

Nvidia Reflex is new to RTX 30 series GPUs, too. With an RTX 3080 or 3090 and a G-Sync monitor, you can use Reflex to reduce system latency in competitive games. Nvidia’s benchmarks show a decent improvement in overall system latency with Reflex turned on, and a drastic improvement when paired with a high refresh rate display and a 30 series GPU.

Feature-for-feature, the 3080 and 3090 are nearly identical. The only major difference is that the RTX 3090 supports dual-GPU setups through SLI, while the RTX 3080 doesn’t.

A BFGPU with a price tag to match

The RTX 3090 is a hugely impressive card from a specs standpoint, and certainly an upgrade over the RTX 3080. Price is the issue here. As a replacement for the Titan RTX, the 3090 is an expensive card aimed more at data scientists and media creators than gamers. And $1,499 is more than most people pay for their entire rig, let alone just a graphics card.

Because of that, the RTX 3090 will always be a niche card, reserved for only the most extreme enthusiasts.

The RTX 3080 should prove to even be a capable 4K gaming GPU, and for $699, it’s a far better value. The RTX 3080 will end up being the go-to, high-end option for gamers. There’s a reason Nvidia has called it its flagship GPU.