Home Comparison Android Vs iOS: Which Smartphone Is The Best For Mobile App Development
Comparison

Android Vs iOS: Which Smartphone Is The Best For Mobile App Development 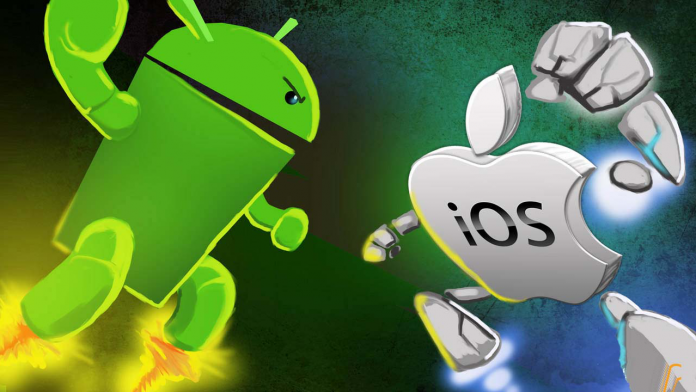 The app industry is booming at a high pace with the help of over 5 billion users. We rely on apps for many of our day-to-day activities.

The use of applications is increasing and they have become an integral part of our lifestyle.

They are playing a great role in the digital expansion of businesses. Android as well as iOS are in neck-to-neck the app market industry.

Android due to its variation in cost covers a wide range of markets, whereas iOS holds a huge number of loyal customers.

If you want to get android and iOS apps developed you can get in touch with android app development company.

According to Statista, 88 percent of all the smartphones that were sold to end-users were phones with the Android operating system.

As of 2016, Apple’s iOS is the second most popular operating system for smartphones.

Apple’s iOS mobile operating system held around 13.5 percent of the global smartphone market share in the second quarter of 2020.

Now here, with the above stats you might be overwhelmed with Android’s market share, but do not forget the monetization and strong customers you get in iOS.

Android is based on the open-source ecosystem. It means you get multiple combinations of hardware and software.

An open-source ecosystem drives more users hence more and more developers. A developer gets the opportunity to apply her/his creative and innovative mind.

An Android app development company has a better user perspective due to its rich experience over the years.

Apple has profitable and loyal users. On this platform, any application is well tested and then accepted by the play store.

If you are developing an app with high lure towards monetization, then this will be the best platform for you.

Here, users are used to paying to get apps. Downloading paid apps is not an issue here, unlike android.

We will go through several aspects ranging from complexity to cost to the time consumed and more. Here, we will be discussing the following features:

When the face-off is between Android and iOS in context to development complexity, iOS is leading in this area.

It is much easier to develop an iOS application than an android app. This is mainly because Apple has limited types of devices, so its screen size and aspect ratio are fixed unlike android, where developers need to go through a complex process.

An iOS mobile app developer needs a MacBook for the development process, which simply skyrockets the entire cost.

MacBook is a must to install XCode and implement coding easily. On the other hand, android app development is time-consuming so the overall costs involved in the process get high.

So, here if you have the hardware then iOS is preferable, and if you do not have it then Android. Here no one wins.

You can take the help of android app development services to develop android applications.

iPhone app development is easy but the acceptance of the apps by the app store is a lengthy process.

Android applications have a very large community of around 88% whereas iOS has a comparatively smaller market of around 21 to 22%.

So, if you want to build an application to drive more users then Android should be preferred.

Android users are clearly dominating when it comes to market share. iOS app development services keep a keen eye on market share and new tech entries in the iOS industry.

In terms of availability of apps on both platforms, the Google Play Store is leading with 2.6 million apps, followed by the Apple play store with 2 million applications.

If you are thinking of getting an android application developed, go for it. You can take help from an android app development company to get it done.

Here, we need to consider two factors – the reach and monetization – to get an approximate idea of the revenue generated.

Android covers a very big marketplace, so here the main sources are in-app purchases, subscriptions, pay per download, and advertisements.

iOS covers a small marketplace but has able users. Most of the applications can be monetized and yet it does not affect the number of their downloads.

According to a survey, iOS is leading by generating $14.2 billion followed by Android with $7.7 billion.

Which One Should You Choose?

Scoreboard says Android is leading iOS by one point. This infers that both the platforms are equally valuable, and the selection depends on the context and purpose.

If you are targeting the mass, go for android. If you are developing apps for a monetization purpose, iOS will be great for you.

By now you should have got an idea about both the platforms. Both these platforms are marvelous when it comes to app development, and you just have to select according to your project.

If you are interested in building a mobile application, you can take the help of a mobile app development company.

Tarun Nagar is the Founder & CEO of Dev Technosys iphone app development company USA. With 10+ years of experience of enabling then Start-ups which are now global leaders with creative solutions, he is differentiated by out-of-the-box IT solutions throughout the domain. He is known for his visionary qualities and adaptability for technology and trends, passionate as he is in every aspect dedicated to making IT simple, accessible and approachable for business enterprises.