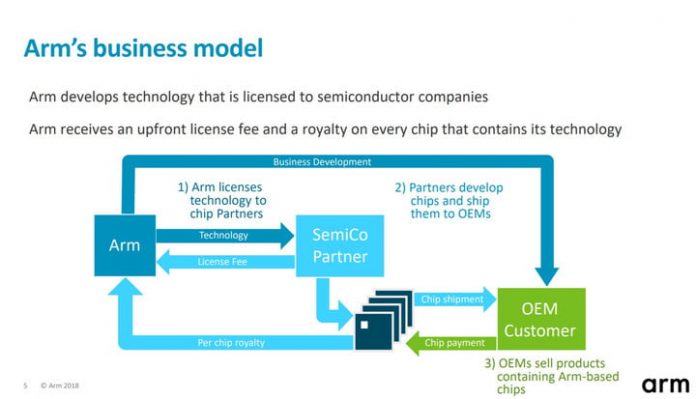 Nvidia is most closely associated with its successful graphics cards, but its rumored acquisition of ARM has the potential to take it beyond just GPUs. ARM’s processor architecture could allow Nvidia to have a far bigger reach than rivals Intel and AMD could ever imagine.

With more than 130 billion processors shipped as of 2019, ownership of ARM could help Nvidia exert its influence not only on products like smartphones, tablets, wearables, and computers, but also help to shape entire industries ranging from networking devices, servers, and data centers to embedded markets spanning smart cars, robotics, and IoT (internet of things).

Nvidia just might buy its way into becoming the most important silicon producer in the world.

Unlike Nvidia, AMD, and Intel, ARM doesn’t sell a packaged processor. Instead, the company operates on what it calls a “flexible licensing model.” Each licensee can license the processor design and have the freedom to customize the architecture to fit its own specifications. Typically, licensees pay an up-front fee to license the architecture, and ARM also earns revenue through on-going royalty payments. It seems likely that this model would survive under Nvidia or any other possible buyer’s ownership.

As of 2019, ARM counts more than 1,550 licensees, with the expectation that more than 100 additional licensees are added each year. The company’s market share in smartphones and tablets sits at approximately 90% as of 2016, and it is making a big push into servers, networking infrastructure, and embedded intelligence markets. All of this presents a unique opportunity for Nvidia to extend its reach beyond PCs and data centers.

The “flexible licensing model” is also complementary to Nvidia’s own graphics business. Having already been a licensee of ARM with its Tegra processors (found on products such as Nvidia’s Shield TV streaming box and the now-defunct Microsoft Surface RT), more licensing opportunities could open up if Nvidia acquires ARM.

ARM currently licenses its Mali graphics core on its CPU architecture, but licensees — like Apple, MediaTek, Qualcomm, and Samsung — have the option of using their own custom integrated GPU design. Nvidia could either replace the Mali’s graphics core and license out its integrated GeForce GPU in a packaged solution for licensees, or it could continue to offer the Mali design and reserve the GeForce cores for its own custom Tegra processors.

Access to devices outside Nvidia’s current reach is the biggest reason the company would be interested in purchasing ARM. However, there’s even an opportunity in the future in the PC space.

At present, most PCs are locked into the x86 architecture used by Intel and AMD. However, the future outlook is bright for ARM. Despite a failed foray into ARM PCs with the Surface RT, Microsoft is making headwinds with its second effort with partner Qualcomm and its ARM-based Snapdragon 8cx processor. Promising better battery life, consistent performance, and thin and light designs, notebooks and convertibles running on the Always Connected PC platform offer many advantages over its Intel rival, including mobile connectivity and all-day computing power. Microsoft’s Surface Pro X tablet is also based on a semi-custom ARM processor co-developed with Qualcomm, though we can see designs from Samsung, Lenovo, and others.

Microsoft’s troubled support for ARM might not inspire a lot of confidence, but Apple’s upcoming move to ARM is just the opposite. Apple has already shown that speed and performance was not an issue on Macs running Apple’s custom silicon. If Microsoft ends up following the lead of Apple, ARM could end up being the future of computing for both platforms.

Beyond desktops and laptops, controlling ARM would also help Nvidia push for dominance in data centers. Nvidia already has data center solutions based on its advanced GPU architecture, but adding a CPU component will give it a leg up against its rivals. Controlling both the CPU and GPU is a unique position that only AMD currently enjoys.

The move could allow Nvidia to out-maneuver AMD in data centers and servers, given that its rival had made significant supercomputer announcements in recent months, including a recent partnership with Oak Ridge National Laboratories.

Killing AMD on the Mac

In recent years, desktop Macs and Apple’s Macs that ship with a discrete GPU come exclusively with AMD’s Radeon graphics. Rumors circulated that an ongoing feud between the Mac-maker and Nvidia left Apple shunning GeForce from its platform. That’s a big chunk of the PC market that had been outside of Nvidia’s reach.

Through ARM, Nvidia could win back a piece of the pie and regain a presence on Apple’s platform. ARM chip designs can already be found on the iPhone, iPad, Apple TV, HomePod, and Apple Watch.

Even though Nvidia and Apple may once again become partners through an ARM deal, I don’t expect Apple to play nice. If Nvidia were to license GeForce graphics cores, Apple will likely shun that design, as the iPhone-maker already delivers its own A-series silicon with a customized processor architecture and in-house graphics solution.

Earlier this year, Apple even rejoined former partner Imagination Technologies in a new agreement that could potentially bring ray tracing capabilities to the company’s future integrated graphics chipset, which could help drive investments in augmented and virtual reality. Depending on the performance that Macs with Apple silicon produces for gaming, such a solution could rival powerful desktops powered by Intel processors and Nvidia RTX graphics.

Clearly, an ARM acquisition has huge benefits for Nvidia. But at this point, all of this is mere speculation. Though the Nvidia deal is said to be in advanced negotiations with ARM-parent Softbank, it hasn’t been accepted or finalized.

Nvidia also isn’t the first large company to be interested in acquiring ARM. Apple was actually originally rumored to be in talks with ARM earlier this year. It fell through, reportedly because a tie-up wouldn’t fit Apple’s business ambitions.

Softbank last purchased ARM four years ago at the cost of $32 billion, but it’s unclear how much Nvidia is willing to pay to acquire the firm. If the deal fails, Bloomberg reported that Softbank may proceed with taking ARM through a public stock listing, and an IPO could value the company at $44 billion.

That’s a big chunk of change, but if Nvidia is willing to shell it out, the power dynamics in the silicon industry could be shifted forever.