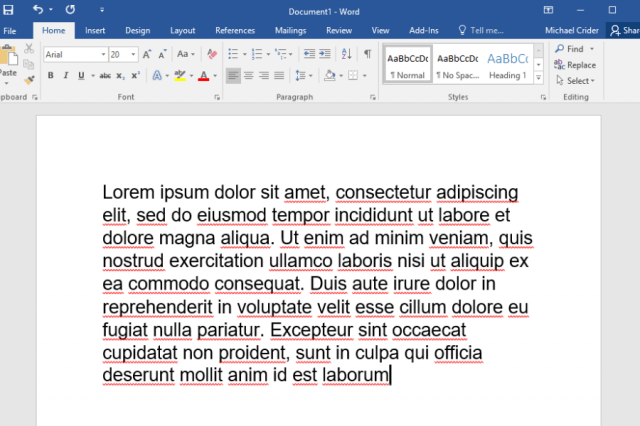 For the last few decades, Microsoft Word has been the de facto standard for word processors across the working world. That’s finally starting to shift, and it looks like Google is the heir apparent. The company’s Google Docs solution (or to be specific, the integrated word processor) is cross-platform and interoperable, automatically syncs, is easily shareable, and perhaps best of all, is free.

However, Google Docs still has a long way to go before it can match all of Word’s features — Microsoft has been developing its word processor for over 30 years, after all. Will Google Docs’ low barrier to entry and cross-platform functionality win out? Let’s break down each in terms of features and capabilities to determine which is best for your needs.

How does each word processing program compare?

To put it lightly, Microsoft Word has an incredible advantage on Google Docs in terms of raw technical capability. From relatively humble beginnings in the 1980s, Microsoft has added new tools and options in each successive version. Most of the essential editing tools are available in Google Docs, but users who are used to Word will find it limited.

From the primary placement of images to advanced techniques like macros and mail merge, Word is the breakaway winner for more technical writing. Word’s advanced features also include better incorporation of images and graphics, more exceptional options over text styles, easy addition of footnotes and citations, and better table controls and formats.

The same thing that makes Word excel in terms of features also makes it complicated when it comes to the user interface. Thanks to hundreds of built-in tools and options, finding the right one in Word can be somewhat confusing for novice users. Google Docs, on the other hand, is comparatively simple to pick up but more limited in terms of options.

Beyond the standard text formatting tools and a few extras like tables, rulers, page numbers, and footnotes, there isn’t much to the Word UI that you won’t find in a basic text editor. For user learning and ease of use, simpler is better. Microsoft has attempted to streamline Word’s UI in recent years, but it can be somewhat unwieldy. If you need simple tools to create an easily accessible document, Google Docs has you covered.

While both Word and Docs are compatible with the most commonly used word processing formats like Word, PDF, and rich text, Word can import its files much more quickly and is much better at displaying complex file formats consistent across different programs of the Microsoft family.

Google Docs files can be downloaded in the same formats as Word documents, but they excel at immediately publishing documents as webpages. Microsoft word has notable limitations on doing the same, as many editing elements like layout and formatting can be lost in translation.

Word includes editing and markup tools for sharing and editing among teams, and the latter Office 365 versions of the program do allow for web-based editing and sharing. It is a bit unwieldy, however, and users foreign to it may find it confusing.

When quickly creating documents that can be shared with Google Drive and be almost instantly distributed worldwide if need be, Google Docs has the edge. Google Docs users can easily control who can edit, comment, or be able to access the document in the first place, whereas Word documents can only be shared with specific contacts. Also, while Word has features like Track Changes and comments for collaboration, the Google Docs timeline allows users to compare any document changes with old versions and know who made them and when.

As a web-based service, Google Docs is available on any desktop platform with a modern browser. That includes Windows, MacOS, Linux, Chrome OS, and (in some cases) even mobile platforms running in compatibility mode. Apps for Google Docs are available for Android and iOS, but notably not Windows Phone or Blackberry. An Internet connection is required on the desktop unless you use the Chrome OS/Browser app, and a Google account is necessary to log in.

Microsoft Word and Google Docs can also be augmented with add-on tools from third-party developers. Microsoft Word (as a subset of Office) is available for Windows and MacOS, and it comes pre-installed on Windows Phone devices. Free Word clients are also available for Android and iOS, and Office 365 is available on the web for modern browsers.

All saves on a Google Doc are not only automatically uploaded to the cloud, but a separate file is created each time a change is made. Microsoft does allow users to sync, edit, and open Word documents online, but that will require you to either set up OneDrive backup with Microsoft Office 2019 files or possess a Microsoft 365 subscription.

Google Docs is free in just about every circumstance. A Business version of Google Apps is available starting at $5 per user per month, but most individual users won’t need its administrator controls or live support.

A standard, stand-alone version of Microsoft Office is available for a one-time purchase of $149.99, which enables you to install it on one computer only (Word is not available as an individual program). Microsoft Office 365, which includes online and offline versions of Word, starts at $5.00 a month. Depending on your work or school, you may be furnished with a free copy, but most users need to pay at least something for Word.

Users who need a lot of storage space for their documents will find Word with Microsoft 365 the superior option, but OneNote offers users much less free storage than Google Docs (7GB compared to 15GB, respectively). On the other hand, Google Docs offline functions are minimal without the Google Docs Offline Extension, while Word can produce high-quality documents with or without an internet connection.

Which word processor is best for you?

Here’s the gist of all this: If you’re used to Word or rely on any of its more advanced features, you’ll want to stick with it, especially if your employer requires its use. While it’s possible to use Google Docs at home and Word at work, it’s not always a fun experience.

On the other hand, if all you need is a simple word processor or you prioritize sharing with other users, Google Docs is more than capable. Since the latter is free, and the former is often provided to end-users by companies or schools, it’s entirely possible to use and appreciate both.