Home News Using drones to detect coronavirus? It’s not as crazy as it sounds
News

Using drones to detect coronavirus? It’s not as crazy as it sounds 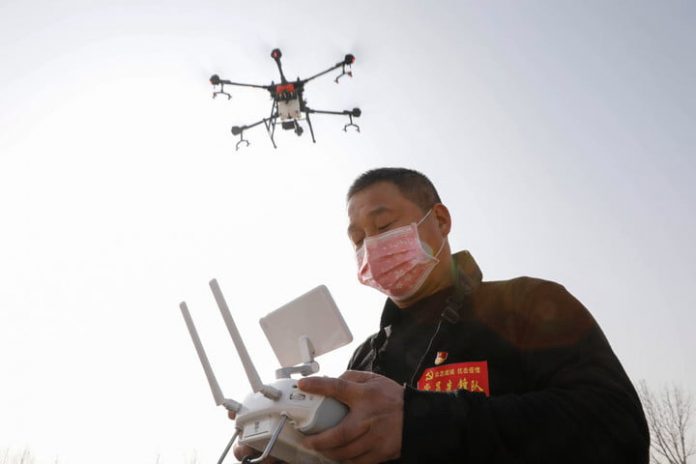 At the Smithsonian National Air and Space Museum in Washington D.C., there’s a drone.

It’s not just any drone, though. It’s a quadcopter called the Draganflyer X4-ES, made by a company named Draganflyer, which introduced one of the first commercial drone kits way back in 1999. That’s not why it’s there, however. Back in May 2013, the Draganflyer X4-ES made history in Saskatchewan, Canada as the world’s first drone to save a human life.

“A search-and-rescue organization was using one of our drones, which we’d equipped with a thermal camera,” Cameron Chell, CEO and chairman of Draganflyer, told Digital Trends. “They were looking for a car accident victim, who had wandered from the scene with a head injury during a snowstorm. After a day of not finding them, they were able to find the person in a forested area using thermal signature.”

Today, Draganflyer is continuing to use its drones for potentially life-saving applications, and starting soon, it might join the effort to stop the spread of coronavirus. The novel coronavirus known as COVID-19 has so far infected more than 76,000 people worldwide. At time of writing, at least 2,244 people have died as a result — with all but 11 of those deaths taking place in mainland China.

Recently, Chell said that it received a “very credible inquiry” about using its drone technology to help track the spread of coronavirus. While no vaccine is yet available for the virus, such tracking could conceivably be used to help stop the virus from spreading further.

Monitoring from a distance

At present, places where large numbers of people gather — from airports and ports to factories — sometimes employ handheld infrared thermometers to detect people’s temperature and potentially detect those exhibiting flu-like symptoms. That’s not a perfect solution, though. These devices, which look like small white pistols that measure temperature by being aimed at people’s foreheads, can be unreliable outside of tightly controlled healthcare settings.

Draganflyer doesn’t have a golden bullet when it comes to this problem. Chell notes that the plethora of sensors it can deploy with its drones may offer additional ways of looking for potential signs of infection, however. One of these is temperature, which can be measured at a greater distance than the infrared “thermometer guns” already being used. These airborne infrared sensors can be used to read a person’s facial temperature at 100 yards or even further.

And that’s not all. Chell said that leveraging some smart technologies such as Doppler radar and equally smart A.I., the company’s drones “can do everything from monitor everything from stress levels to watery eyes to blood pressure. You can even use a particular sensor to measure heart rate. When you combine all of those symptoms, you start to get a stronger picture about the potential of an infectious disease or virus.”

Chell was not able to provide more information about the client to Digital Trends, but noted that the drones would potentially be deployed for “government use.” He said that the deal is still at a conversation stage right now, although there had been a strong level of interest expressed.

The ethics of surveillance

Applications such as this highlight the immense power of modern drone technology when it comes to surveillance-related applications. That is both extremely good and potentially unsettling. Chell, who says he is very aware of the ethical issues involved with such tracking, notes that his initial reaction to drones being used for this kind of health monitoring was skepticism.

That’s not because he had concerns about whether the tech would work or not. Yes, there are some technical bottlenecks that still exist, he said. Right now, getting a reading of facial temperature can take between 10 and 15 seconds to record. This needs to be reduced to five seconds. “That’s one of the engineering problems we recognize we have to solve,” he said. “We think we can.” The right A.I. models will additionally need to be designed to take all of this disparate data — ranging from temperature to watery eyes — and turn it into an algorithm that works effectively. This also is doable.

Rather, the issue is whether using drones for this kind of surveillance is likely to be viewed negatively — even if it’s for something good like health-monitoring. But he believes it’s a better approach than the other ones being used. “Drones buzzing a few hundred feet away may seem intrusive, but it’s certainly not as intrusive as having a line-up and someone sticking a sensor on your forehead,” he said.

Chell noted that it is important that any data gathered in this way is used to get population samples and not to profile individuals and single them out of a crowd. “If health monitoring is done [as a path to] identification, designed to find specific individuals, I suspect people are going to be really uncomfortable about that,” he said. “However, if you’re doing it to monitor and protect, or understand health trends and things like that, I think people are okay with it. [Or more okay than] standing in line and having a probe stuck on their forehead.”

This is where questions will be asked about the difference between the technology itself and its applications. Certainly, it’s desirable to imagine non-invasive or disruptive ways of tracking the spread of a virus so as to keep people safe. But such technologies could also be open to abuse; particularly in parts of the world where state surveillance is used to control, intimidate, or persecute certain populations.

Nonetheless, the fact that these technologies exist and are now readily available means that people need to be aware of what they can do — both negatively and positively. Chell gives the parallel example of the smartphone.

“Fifteen years ago, if someone said that you were going to have a device that you carry around with you everywhere, that you put beside your bed at night, that would tell anyone who wants to access it where you’ve been all day, how long you’ve spent there, exactly which sites you’ve been on, that would profile you for advertising, and that you’d voluntary give permission to do any and all of that, [most people would just] say ‘forget it,’” he said. “And yet just about every one of us does it.”

The reason for this, he opined, is that there is a positive value exchange. As the cultural theorist Paul Virilio once observed: the inventor of the ship is also the inventor of the shipwreck. We need to weigh up whether the potential of shipwrecks is sufficiently offset by the value of having ships. As Chell said, if unmanned aerial vehicles (UAVs) follow the smartphone model in terms of perceived usefulness, it won’t be long before health-monitoring drones are not only omnipresent; they’ll also be taken for granted.

“[Perhaps one day for our kids] to think that there weren’t always drones that do health-monitoring will just sound crazy,” he said. He adopts the voice of a hypothetical future teenager. “‘Can you imagine a world where the government doesn’t know how healthy your heart is at any given moment?’ That will be completely foreign to them.”