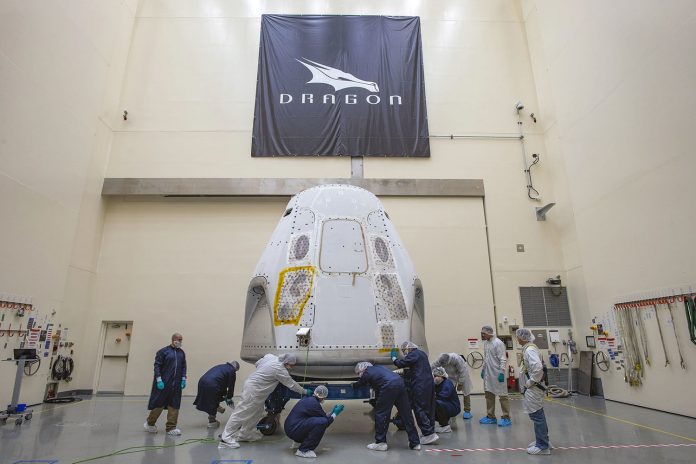 The SpaceX Crew Dragon spacecraft for the first manned launch from American soil since 2011 has arrived at the launch site. NASA and SpaceX are preparing for the agency’s first flight test with astronauts to the ISS as part of the Commercial Crew Program. SpaceX

SpaceX is getting closer to the first manned launch of its new Crew Dragon capsule — which will once a carry NASA astronauts to the International Space Station (ISS).

The Crew Dragon capsule arrived at the launch site in NASA’s Kennedy Space Center in Florida this week, from where NASA astronauts Doug Hurley and Bob Behnken will be taking a trip to the ISS beginning at Launch Complex 39A. This is the same launch site used for both the Apollo and Space Shuttle programs, which is appropriate as these were the last programs in which astronauts were launched from American soil. The capsule will launch atop another piece of SpaceX equipment, a Falcon 9 rocket.

Crew Dragon in Florida ahead of its flight to and from the @space_station with @NASA astronauts @AstroBehnken and @Astro_Doug onboard! pic.twitter.com/nerz0Qujso

The launch of the Crew Dragon will be a significant step for American spaceflight, by bringing launches back to the U.S. for the first time since the Space Shuttle program ended in 2011. It will also be a demonstration of NASA’s commercial crew program, a co-operation with private companies including SpaceX and Boeing to take over the tasks of ferrying astronauts to the ISS.

The commercial crew program has faced issues in the past, such as the recent orbital test flight of the Boeing Starliner capsule which had several problems. Not only did the capsule fail to make it to the ISS due to a timing issue, but a subsequent investigation discovered a second error which could have brought the capsule down had it not been discovered in time.

The Crew Dragon capsule has had more success in its recent tests, with a perfect parachute test at the end of last year and a successful in-flight escape test a few weeks ago.

We shouldn’t have to wait long to see the capsule in action once again. The first manned Crew Dragon mission is targeted for May 7, as reported by Ars Technica.