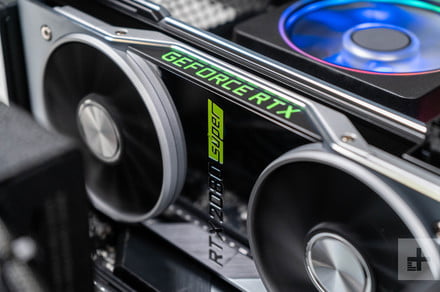 Nvidia will debut as many as six new laptop graphics options in March, 2020, covering the entire range from the entry-level GTX 1650, right through to the RTX 2080 Super with 8GB of GDDR6. The 2070 Super is also making an appearance, bringing 8GB of its own memory to bear, though there’s also a suggestion that the RTX 2060 will be marketed as a Super variant, too.

In the first few weeks of 2020, the momentum and mindshare for new graphics cards and chips has been everywhere but in Nvidia’s camp. AMD has some new desktop and mobile GPUs of its own, in the form of the 5500 XT and 5500M, and there are new reports of impressive performance from Intel’s Xe GPUs. But Nvidia appears ready to hit back with some new laptop chips of its own, according to a WCCFTech report on leaks from a source inside Nvidia.

The new GPUs are set to replace existing GTX and RTX options in most mainstream laptops in 2020, ousting some older 10-series designs, and upgrading others to the higher performance offered by Nvidia’s Super range of refreshed cards. The GTX 1650 will replace the aged GTX 1050 3GB, upping the memory to 4GB of GDDR6. The 1650 Ti will ditch the existing GTX 1650 with 4GB of GDDR5, boosting core counts and clock speeds as well.

The RTX 2060 is, in name alone, no different from the existing RTX 2060 available in laptops, but WCCFTech believes this will use a brand-new chip, and is likely to be released as a Super variant, with higher clocks.

There will reportedly be two new RTX 2070s, one Super, the other not. It’s not clear how the non-Super will differ from the original, but the Super variant is expected to have higher clocks and additional CUDA cores, bringing it more in line with the standard RTX 2080. That will be eclipsed by the new, top-tier Nvidia RTX mobile GPU, the RTX 2080 Super with a full 8GB of GDDR6.

With plans for these new GPUs to become available on March 31, it raises the question of how soon we can expect Nvidia Ampere GPUs. Those next-gen graphics cards and chips are expected to debut in 2020, but releasing a new line of cards so soon after a mobile refresh would be a surprise.

Facebook
Twitter
Pinterest
WhatsApp
Previous articleFreshen up your Skagen Falster 2 with a fun new band
Next articleHow did Iowa screw up its Dem caucus vote? There was an app for that