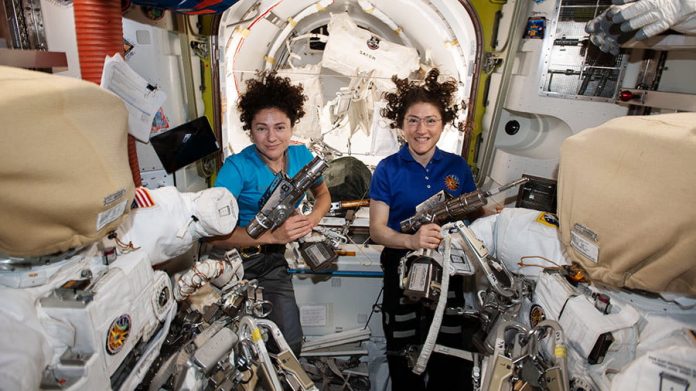 NASA astronauts Jessica Meir (left) and Christina Koch are pictured preparing for their first spacewalk together on October 18, 2019. NASA

Two NASA astronauts aboard the International Space Station (ISS) will shortly begin a spacewalk to perform upgrades to the station — and you can watch the event happen live using the video below.

NASA astronauts Jessica Meir and Christina Koch will suit up and head outside of the space station to replace batteries as part of a long-term project to update the station’s power system. This is the second spacewalk performed by these two women in one week, as they also performed another spacewalk together on January 15, also to replace batteries.

If you’re interested in seeing the spacewalk happen live, you can tune into NASA TV using the video below. The coverage of the spacewalk begins at 3:50 a.m. PT on Monday, January 20, with the spacewalk itself beginning at 4:10 a.m. PT.

Meir and Koch are famous for being the astronauts who participated in the first all-woman spacewalk which happened last October. Koch, in particular, has been breaking all sorts of barriers, recently breaking the record for longest single spaceflight stay by a woman at 289 days at the end of last year. This week, Koch celebrated her 300th consecutive day in space, which is also the longest consecutive stay for any women.

“For 300 days I’ve been fortunate to be a part of something that strives to represent and benefit all humanity,” Koch wrote on Twitter, posting a beautiful image of the Earth as seen from the ISS. “As I look out and reflect on our shared world, that has been the greatest honor.”

As also posted on Twitter, Koch and Meir are preparing for today’s spacewalk in a charming manner you might not have considered the need for — by double-braiding each others’ hair to keep it out of the way while they work and to fit it snugly under the cap worn beneath a spacesuit helmet.

Spacewalk time! After all the technical studying, airlock prepping, and conferencing, @Astro_Jessica and I multitask as we do our final briefing.

????Spacewalk hair pro tip: Double braid is the way to go–fits snug under the com cap, out of the helmet seal, and no flyaways! pic.twitter.com/C9PgvA9FLN