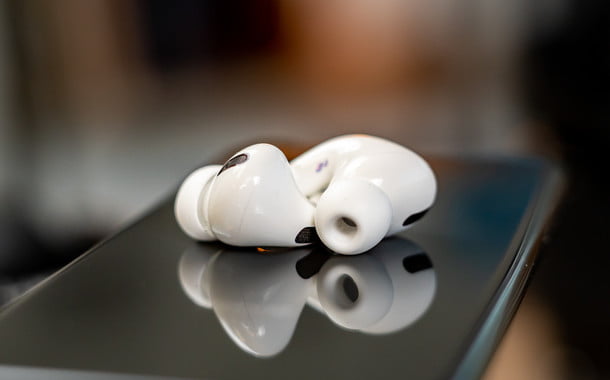 “Shockingly good, the AirPods Pro are a huge win for Apple.”

I can’t recall the last time an Apple product went from credible rumor to product-on-shelf in under three weeks, but that’s essentially what happened with the new AirPods Pro.

When Apple finally confirmed their existence, their proper name, and their arrival date, many of us in the tech media were caught by surprise. Yet, here we are. You can now purchase the AirPods Pro — a new in-ear version of the wireless buds with active noise-canceling — for $250.

I wasn’t expecting much from the AirPods Pro other than the fact that they would almost certainly fly off the shelf. The standard Apple AirPods never impressed me, though I will admit I understand why tens of millions of people use them: AirPods are as much a communication tool as they are a way to listen to music and movies. But, much to my surprise, Apple has a legitimately excellent pair of buds here.

I’ve spent several hours using the AirPods Pro, comparing them against the much less expensive Amazon Echo Buds, and the comparably priced Sony WF-1000XM3, to determine how they stack up. Here’s what I’ve determined.

Apple hasn’t abandoned its golf-tee design for the AirPods Pro — the tee is just a bit shorter now. Rather than opt for a large disc or oval shape as we see with so many competing wireless buds, the AirPods Pro offer a more covert aesthetic than their non-pro counterparts. Love it or hate it, the design has become iconic, and even a sort of badge of honor for the Apple faithful.

The shorter stem raises my only real concern. Battery life. We know the battery isn’t replaceable, and though Apple does offer a “Battery Service” option for its AirPods, it amounts to a slight discount on a pair of brand-new buds.

That’s already a problem when the longevity of the super-small, noodle-shaped battery in the standard AirPods is limited to 2 to 3 years of charging cycles. With the AirPods Pro, I fear this issue may be exacerbated since the battery is necessarily smaller.

Here’s a tip for ya

Aside from the shorter stem, the most obvious visual change to the AirPods playbook is the addition of a silicone eartip.

Rather than sit outside your ears and shout at them through the door, allowing plenty of other outside noise in, the AirPods Pro adopt an in-ear design which has them seal up the entrance to the ear canal and broadcast sound straight down the hallway to your eardrum. This seal is essential for blocking out noise and, as a bonus, delivers better bass response.

The AirPods Pro come with three sets of silicone eartips — no Comply foam folks, sorry — but these are not ordinary eartips. Instead of (with difficulty) sliding onto a little nubbin, as so many other in-ear buds require, the AirPods Pro tips snap on with a satisfying click which is both easier to swap out, and just as secure as, the more conventional design.

As expected, Siri is on-deck for iOS users, constantly listening for voice commands like “call Mom,” “pause music,” “how do I get to the gym,” and my personal favorite, “what does the fox say?”

If you want to control music playback, answer a call, or turn noise canceling on and off without speaking a word or pulling your phone out of your pocket, you can use touch controls built into each of the two earbud stems. It would actually be more appropriate to call these “grab controls,” or perhaps “grip controls,” since you must grasp and squeeze the stems.

If you’re an Android user and want to call up Google Assistant, you’ll want to head to the Google Play store and download one of the many apps designed to make the AirPods work on an Android phone as they do on an iPhone.

Let it in or shut it out

As is now common with most active noise-canceling headphones, the AirPods Pro offer the option to either shut noise out or let it all in.

Apple calls the latter feature “Transparency Mode,” and its an apt title. As we found to be the case with the Beats Solo Pro, the sound piped in from the outside world is surprisingly natural — as close to just pulling the buds out as we’ve heard yet.

This will be great for keeping tabs on that bus that’s about to mow you down in an intersection. I do wish the feature was adjustable, as it is in the Amazon Echo Buds, where I can choose how much of the outside world to dial in.

More impressive than Apple’s transparency mode is how well its noise-canceling tech works. I was shocked, frankly. I’ve not been impressed with the Beats brand of noise canceling since Apple bought the company, so I didn’t expect much from the AirPods Pro, but Apple’s first go at active noise canceling is right up there with Sony and Bose.

In fact, when I first slid the second AirPod Pro into my ear (which is what activates noise canceling — it turns off when one bud is removed) I had the same unsettling whooshing sensation I experienced when I first put on the Bose QC 35II many years ago. The effect is immediately noticeable and very impressive.

I compared the AirPods Pro to the Sony WH-1000XM3 in every noisy environment available to me — the office, streets bustling with buses, on a light-rail train, and pretty much everywhere but on a plane — and found that the noise-canceling effect between the two was virtually indistinguishable. I have not yet had the chance to compare the AirPods Pro to the Bose Soundsport Free, but I anticipate a similar experience.

Also, a note about call quality. The Apple Airpods Pro beat the pants off of the Sony WH-1000XM3 for phone calls. Not only did they handle windy conditions better, but they all but eliminated background noise. I stood right next to a bus engine during a call, and it was almost inaudible. Bose will probably come out with a new product that leads the pack in call quality, but the AirPods Pro should hold up very well for most users.

Just as I was taken aback at how great the AirPods Pro did noise canceling, I am equally impressed with sound quality. Sure, I’ll take the sonic profile of the Sony WF-1000XM3 or the Sennheiser Momentum True Wireless in a head-to-head comparison, but the fact that the AirPods Pro are even in the same league is, again, something of a shock.

Hats off, Apple. You done good.

I don’t consider the AirPods Pro demographic to be the most discerning audiophiles, so I think most owners will find the sound quality impressive. Buyers will be more than satisfied. But the fact that the AirPods Pro can resolve fine detail, have full, rounded bass that is as tuneful as it is punchy, clear mids, and palpable transient response to go with some zesty treble, is remarkable considering Apple’s lackluster history in the sound quality department.

Hats off, Apple. You done good.

Apple’s Airpods Pro don’t have to be great for people to buy them. Their simple interface assures iPhone owners will treat them as the default. So, the fact they are great is all the more remarkable. Even Android owners may want to give them a look.

The aforementioned Sony WH-1000XM3 will offer slightly superior sound quality at the sacrifice of call quality and compact form factor. The Amazon Echo Buds are much less expensive, but they don’t sound as nice and aren’t as effective at noise canceling.

Based on reports of original AirPods petering out after 2 -3 years, I’m going to guess the AirPods Pro are destined to experience battery failure in roughly the same time frame.

The AirPods Pro come with a one-year limited warranty against manufacturer defect only — this does not cover any damage. Add AppleCare+ for $29 and you’ll get much better protection for up to two years.

Yes. These are a great set of compact, comfortable, and remarkably effective true wireless earbuds.