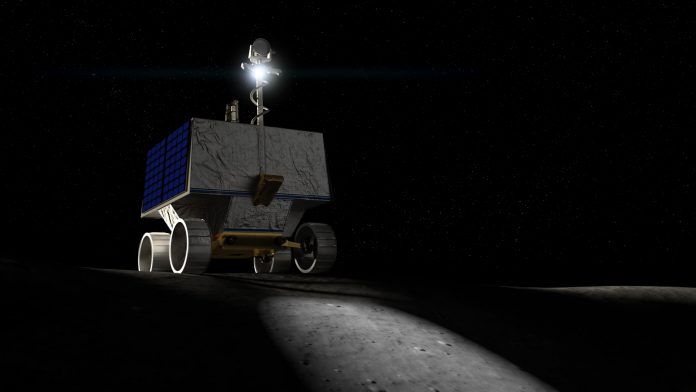 NASA’s Volatiles Investigating Polar Exploration Rover, or VIPER, is a mobile robot that will roam around the Moon’s south pole looking for water ice. The VIPER mission will provide surface-level detail of where the water is and how much is available for us to use. NASA Ames/Daniel Rutter

As part of its Artemis mission, which aims to return the U.S. to the moon by 2024, NASA is recruiting a new robotic helper called the VIPER rover that will sniff out lunar water ice.

The Volatiles Investigating Polar Exploration Rover, or VIPER, will be sent to the moon’s south pole, where frozen water has been detected. The hope is that the rover can locate water ice in advance of the humans who will travel to the same region in the next four years. The rover should arrive on the moon’s surface in December 2022 and collect 100 days’ worth of data, which can be used to create lunar resource maps.

Pictured here is a VIPER mobility test bed, an engineering model created to evaluate the lunar rover’s mobility system. The test bed includes mobility units, as well as computing and motor controllers. Testing involves evaluating performance of the rover as it drives over various slopes, textures, and soils that simulate the lunar environment. NASA/Johnson Space Center

Data from tools like the Lunar Reconnaissance Orbiter (LRO) shows that there appear to be ice deposits inside craters near lunar poles, and that this ice could be millions of years old. There may even be millions of tons of ice, which would be an invaluable resource for astronauts trying to stay on the moon for longer periods of time. But NASA needs confirmation of the existence and qualities of the ice before a plan can be drawn up, and that’s where VIPER comes in.

“The key to living on the Moon is water — the same as here on Earth,” Daniel Andrews, the project manager of the VIPER mission and director of engineering at NASA’s Ames Research Center, said in a statement. “Since the confirmation of lunar water-ice 10 years ago, the question now is if the Moon could really contain the amount of resources we need to live off-world. This rover will help us answer the many questions we have about where the water is, and how much there is for us to use.”

The rover will map different types of soil and compare those that are in direct sunlight with those that are occasionally in sunlight or always in shadow. This should help build up a picture of where ice can be found in other areas of the moon as well.

“It’s incredibly exciting to have a rover going to the new and unique environment of the south pole to discover where exactly we can harvest that water,” Anthony Colaprete, a VIPER project scientist, said in the same statement. “VIPER will tell us which locations have the highest concentrations and how deep below the surface to go to get access to water.”