Bosch will test its A.I.-powered, sound-seeing technology in space 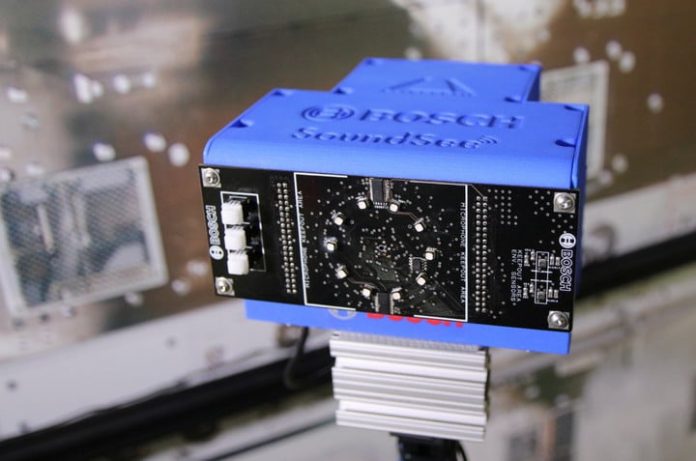 Bosch developed artificial intelligence-powered technology that sees sound, and it will put it through its paces by sending it to space. Its lunchbox-sized SoundSee module is scheduled to blast off for the International Space Station on November 2, and the data gathered during the pilot project will help the firm fine-tune the technology for a wide array of other uses which potentially include automotive, smartphone, industrial, and infrastructure applications.

“Sound has a lot of stories to tell, and we are not extracting them enough. Thanks to A.I., we might have a chance to extract those stories, and use them in addition to the other sensing capabilities we have,” explained Samarjit Das, SoundSee’s project leader and principal researcher, in an interview with Digital Trends.

Developed through a partnership with Astrobotics and NASA, SoundSee will fly to space on the Northrop Grumman’s 12th commercial resupply mission, and it will dock on the International Space Station — which recently got a data boost — several days later. Once it arrives, the module will be mounted to a flying, autonomous robot humorously called AstroBee that hovers around the space station to help astronauts. It will earn the honor of being the first Bosch-developed technology used in space.

Think of AstroBee as the legs, and SoundSee as the brain. As the robot moves around the station, the modular will use a built-in microphone to listen to the noises around it, and create a 3D sound intensity map of its environment. It will convert noises into data that will be analyzed by A.I. The software will paint a picture of what a given machine is supposed to sound like. Then, as it rides around the station on top of AstroBee, it will keep its digital ear out for anything unusual. Motorists are familiar with this concept: If your car suddenly sounds like a cement mixer, you know something is unusual, and you (hopefully) pull over.

Think of AstroBee as the legs, and SoundSee as the brain.

It’s not always this obvious, though. Machines sometimes make unusual noises that the human ear can’t easily detect, according to Bosch. And, on a secondary but more lasting level, Das added monitoring noise is important to astronauts. They’re trapped in a floating box for months on end with no way out, so keeping the level below 60 decibels is key to preserving their mental well-being. To that end, they need to conduct manual sound checks that sometimes take hours to complete. Inviting SoundSee on board is a way to give them more free time to conduct experiments, like finding out what happens to concrete when it’s mixed in space.

SoundSee will begin its NASA career with three main assignments. In addition to making sure the noise level inside the station remains under 60 decibels, it will monitor the onboard environmental control and life-support systems, which perform a wide variety of essential functions including absorbing CO2 and recycling oxygen. It will also listen to the treadmill, which is one of the most-used pieces of equipment in the space station, and difficult to fix when it breaks. Bosch worked with current and former astronauts to identify these uses cases.

Back on firm ground, Das told Digital Trends his team has plenty of other ideas in mind once SoundSee exits the pilot phase. As we mentioned, it could tell you part of your car is about to break before it leaves you stranded on the side of the road. Similarly, it might detect your house’s water heater is getting old and will need to be replaced in the coming months. On a bigger scale, Das said a robot-mounted SoundSee modular could listen to machines as it prowls the floor of a factory.

Monitoring sound will not solve every problem, he stressed, but isolating noises and analyzing them could reduce downtime. This might mean your car will spend less time in the shop, and cost you less on its way out. Or, it could ensure you and yours don’t have to endure cold showers while you wait for a plumber.

“It’s a research project, so we’ll learn a lot of things from the data gathered. Then, we’ll launch an investigation into how else we can use novel A.I. techniques to do useful things,” Das concluded.