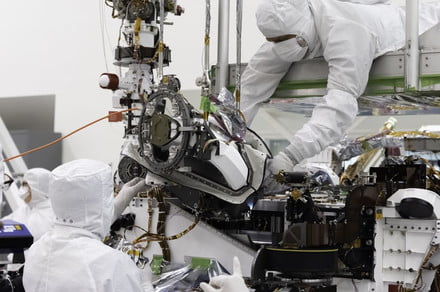 In this August 5, 2019 image, the bit carousel — the heart of sampling and caching subsystem of NASA’s Mars 2020 mission — is attached to the front end of the rover. NASA/JPL-Caltech

The Mars 2020 is in its final year of engineering before it will be deployed to the red planet in July next year. With its power source, wheels, and robotic arm ready to go, the next phase of construction was to install the bit carousel.

The bit carousel is an important mechanism for the gathering and sorting of samples from the Martian surface. It looks “somewhat like an extraterrestrial version of a 1960s slide projector,” according to NASA, and it houses nine drill bits for digging into the surface rocks on Mars and collecting samples to send home to Earth.

Nine drill bits are required as two are used for abrading (scraping away at the rock), one for regolith (the name for the loose soil and small rocks on the surface), and six for extracting core samples from rocks. Once the abrader bit has been used to scrape the top layer of rock away, the regolith and core bits are used to collect a sample and place it into a clean test tube.

“The bit carousel is at the heart of the sampling and caching subsystem,” Keith Rosette, Mars 2020 sample handling delivery manager at NASA’s Jet Propulsion Laboratory, explained in a statement. “It contains all of the tools the coring drill uses to sample the Martian surface and is the gateway for the samples to move into the rover for assessment and processing.”

The carousel will dispense the necessary drill bits when sampling needs to be performed, placing the drill bit into position so it can be moved by the rover’s robotic arm. Now the carousel has been installed, the sampling system of the rover is mostly complete.

“The bit carousel was the last piece of the Mars 2020 rover’s Sample Caching System to be installed,” John McNamee, project manager of Mars 2020, said in the same statement. “And while the rover interior is essentially complete — a battery and a camera used during landing are planned in coming weeks — the assembly and test team will not be resting on their laurels. Months of evaluation and fine-tuning lie ahead to make absolutely certain this rover is on the launch pad and ready to go on July 17, 2020.”

Facebook
Twitter
Pinterest
WhatsApp
Previous articleLatest Windows 10 update is causing random reboots and can break Visual Basic
Next article1.5% of Chrome users’ passwords are known to be compromised, according to Google