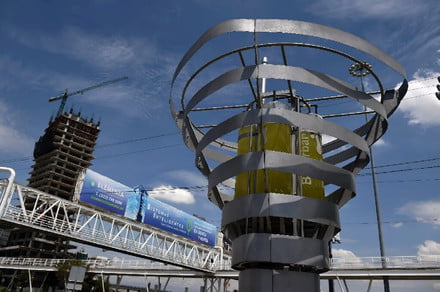 Trees are nature’s way of cleaning the air, but they, unfortunately, come with the downside of needing time in order to grow. A Mexico-based startup called Biomitech has a way around this, however. It developed an artificial tree that it claims is capable of sucking up the equivalent amount of air pollution as 368 living trees. That’s not only a saving on growing time, but also on the space needed to accommodate them.

Called Biourban, the near 14-foot metal tree employs microalgae which pulls carbon dioxide and other contaminants from the air and returns pure oxygen in exchange. Since launching in 2016, the company has installed one tree its home city of Puebla, Mexico, another in Columbia, and a third in Panama. It has additional contracts for two more trees in Mexico, and the possibility of “planting” others in Mexico City and Monterrey.

“What this system does, through technology, is inhale air pollution and use biology to carry out the natural process [of photosynthesis], just like a tree,” Jaime Ferrer, a founding partner in Biomitech, told TechXplore.

It’s a fascinating idea. Biomitech’s goal is to help cities to achieve cleaner air in scenarios where it’s not feasible to plant the massive number of trees that would be necessary to achieve this the natural way. That’s a worthy ambition since, according to the World Health Organization, an estimated 7 million people die from exposure to air pollution each year. That is more than five times the almost 1.25 million people who die in road crashes each year. The downside of the project is that each tree costs around $50,000. If it saves even one life per year that’s worth it, but it may price the company’s solution out of the market for certain parts of the world where this technology would be much-needed.

This isn’t the only project of its kind. German firm Green City Solutions has developed the CityTree, a large vertically installed square of moss culture which uses photosynthesis to clean the surrounding air. CityTree also boasts special sensors that allow it to collect environmental and climatic data, as well as transmitting digital and visual information using technologies such as Wi-Fi and NFC.