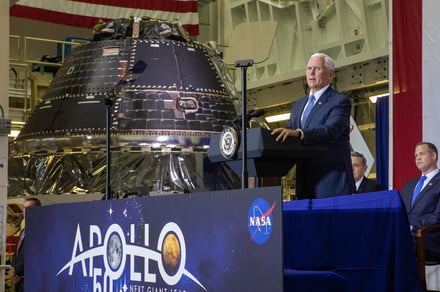 The crew capsule which will carry American astronauts to the moon as part of the Artemis project has been completed. The completion of the Artemis 1 capsule was announced by Vice President Mike Pence during a speech at NASA’s Kennedy Space Center in Florida celebrating the 50 year anniversary of the historic Apollo moon landing mission.

Vice President Mike Pence on stage at the NASA celebration of the 50th anniversary of the moon landing. NASA

Fifty years after successfully landing a man on the moon, NASA is hoping to recreate this feat. But this time, at least one of the crew members will be a woman. NASA has announced that this capsule will carry the “first woman on the moon.”

“Similar to the 1960s, we too have an opportunity to take a giant leap forward for all of humanity,” NASA Administrator Jim Bridenstine said in a statement. “President Trump and Vice President Pence have given us a bold direction to return to the Moon by 2024 and then go forward to Mars. Their direction is not empty rhetoric. They have backed up their vision with the budget requests need to accomplish this objective. NASA is calling this the Artemis program in honor of Apollo’s twin sister in Greek mythology, the goddess of the Moon. And we are well on our way to getting this done.”

Artemis 1 will be carried aboard a Orion spacecraft and a next-generation Space Launch System (SLS) rocket. The idea is that the mission will start with sending a team to the moon for 2024, and then the moon can be used as a stopover for planned manned missions to Mars.

The Orion crew module began its life with the building of a pressure vessel, the inside of the capsule system, at NASA’s Michoud Assembly Facility in New Orleans. Once the pressure vessel was complete it was shipped to the Kennedy Space Center to be built into a full capsule, with all the required parts being integrated.

The Orion will be joined by the European Space Agency’s European Service Module, a German-built module which will provide power, propulsion, and cooling. The two modules need to be joined and have a heat shield back panel installed.

Once this is complete, the next phase for Artemis is testing, which will take place in NASA’s Plum Brook Station in Sandusky, Ohio.