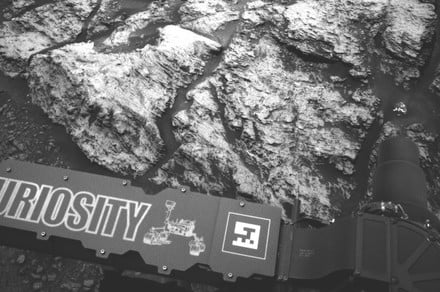 This image was taken by the left Navcam on NASA’s Curiosity Mars rover on June 18, 2019, the 2,440th Martian day, or sol, of the mission. It shows part of “Teal Ridge,” which the rover has been studying within a region called the “clay-bearing unit.” NASA/JPL-Caltech

The strange puzzle of methane on Mars continues. Previously, NASA’s Curiosity rover found something odd: It detected fluctuating levels of methane in the Martian atmosphere, even though an orbiting satellite, the European Space Agency’s (ESA) Trace Gas Orbiter, found no evidence of methane using its highly sensitive detection levels. Subsequently, the ESA’s Mars Express mission used a new detection technique to find that methane was present for only a very short period in particular locations.

Now, Curiosity has detected the highest yet levels of methane at 21 parts per billion units by volume using its Sample Analysis at Mars (SAM) tunable laser spectrometer.

Levels of methane are important because the gas can be produced by microbes. It is theorized that life could exist beneath the Martian surface which is producing the gas, which then escapes up to the surface in plumes. However, methane can also be produced by geological effects of rocks and water interacting, and escape to the surface in the same way. Unfortunately, Curiosity has no way to tell whether the methane it is detecting originates from biological or geological processes.

In a follow-up experiment, Curiosity scientists found that the methane levels later decreased dramatically, down to less than 1 part per billion units by volume. This level is similar to the background levels that Curiosity typically sees, suggesting that the previous spike of methane detected was only temporary. This supports the idea of transient methane plumes which spring up occasionally and apparently randomly, in addition to the seasonal variation in methane levels already recorded.

“The methane mystery continues,” Ashwin Vasavada, Curiosity’s project scientist at NASA’s Jet Propulsion Laboratory, said in a statement. “We’re more motivated than ever to keep measuring and put our brains together to figure out how methane behaves in the Martian atmosphere.”

The next step is for Curiosity researchers to collaborate with the Trace Gas Orbiter team to combine the data from both the surface and the orbit of Mars. This could help to pinpoint the source of the methane plumes and to determine how long the gas stays in the atmosphere for.