See the impact site where Beresheet crashed into the moon 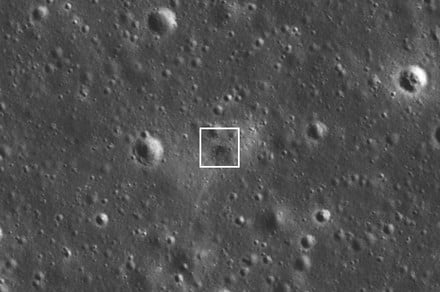 Left: Beresheet crash site. Right: A comparison of images taken before and after the crash, enhanced to show the subtle changes in the brightness of the surface. NASA/GSFC/Arizona State University

SpaceIL’s Beresheet spacecraft might not have made the final hurdle to land on the moon, but it could still make a contribution to scientific knowledge. An image of the site of the crash has been captured by a NASA’s Lunar Reconnaissance Orbiter (LRO) and is being analyzed for information about the lunar soil.

The LRO is an unmanned spacecraft which orbits the moon at an altitude of between 50 and 200km (31 to 124 miles). It was original launched to assist with tasks like locating an appropriate landing site for missions to the moon, but now mostly focuses on scientific work like gathering temperature maps and high resolution images.

The images above were gathered by the LRO’s Narrow Angle Cameras (NAC). There are two NACs on the LRO, which capture panchromatic images at a 0.5 meter scale over a 5km (3.1 mile) swath. These are accompanied by a Wide Angle Camera (WAC) which captures images at a scale of 100 meters per pixel in seven color bands over a 60km (37 mile) swath. The data from both sets of cameras is then fed to the Sequence and Compressor System (SCS). Together, the NACs, WAC, and SCS form the Lunar Reconnaissance Orbiter Camera which captures detailed images of the surface of the moon.

In the case of the Beresheet impact images, it is not clear if the impact created a crater in the surface or not. “At the scale of the NAC image we cannot detect a crater; perhaps there is one but it is simply too small to be seen,” Dr. Mark Robinson for Arizona State University explained in a statement. Alternatively, he said, the craft could have impacted the surface at a low angle which produced a gouge rather than a crater. Or perhaps because the craft was so small and fragile and was not traveling at a very high speed, it disintegrated on impact and didn’t produce a crater at all.