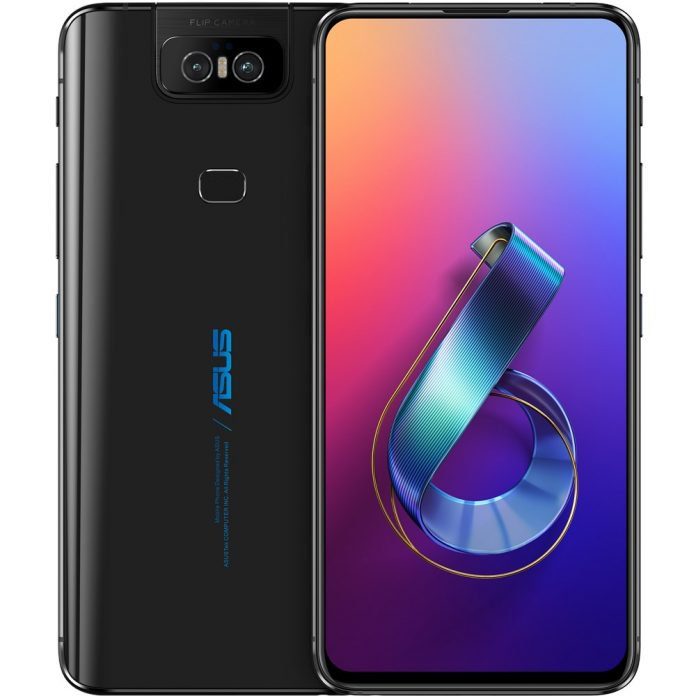 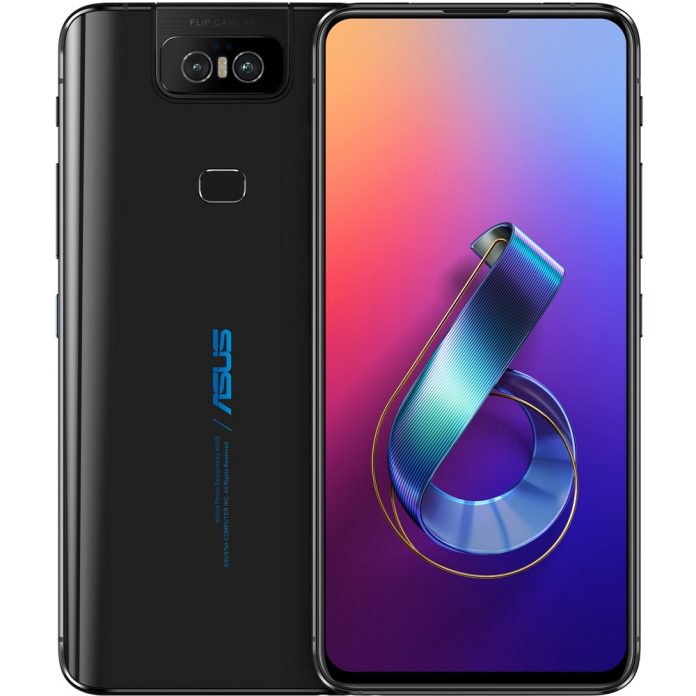 In an age of lookalike phones and steep competition, hardware makers need to be creative. And, while last year was all about squeezing in extra display around a cutout display, the trend in mid-2019 is to work around that concept.

ASUS today joined the ranks of phone makers offering up an interesting design choice for its latest device, the ZenFone 6. Moreover, the new handset also packs incredibly compelling hardware with a competitive price.

The flagship-worthy phone follows on the heels of the OnePlus 7 in that it’s essentially all-screen on the front. Rather than a front-facing camera that pops up from inside the chassis, the ZenFone 6 flips its around. Indeed, when not used for selfies, the camera faces the rear of the phone. 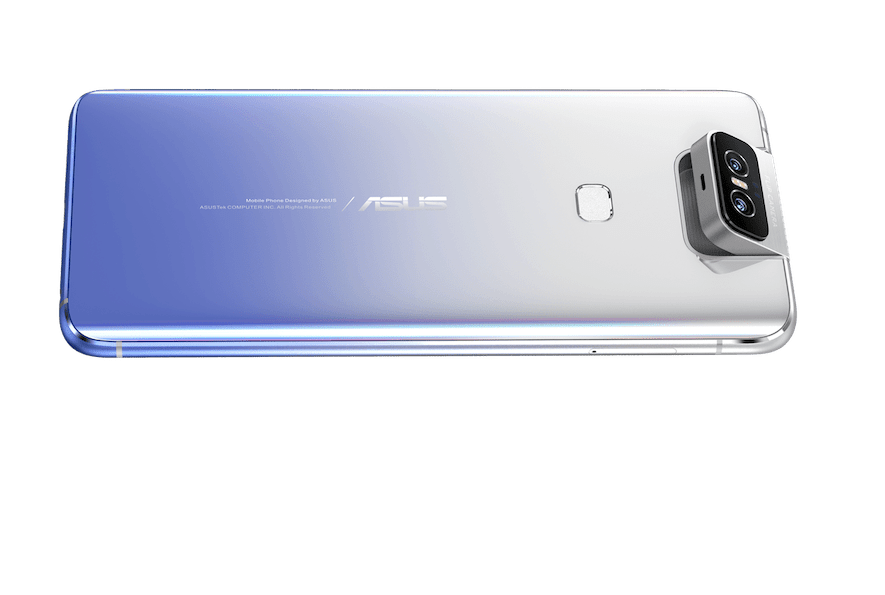 Like most top-tier devices of 2019, the ASUS ZenFone 6 is powered by a Qualcomm Snapdragon 855 processor. Bolstered by up to 8GB RAM, it can house up to 256GB internal storage. What’s more, it has a microSD expansion card slot for even more media.

The ZenFone 6 has a 6.4-inch FHD+ LCD screen with support for HDR10. Because it’s not an AMOLED the fingerprint reader is not hidden under the display.

The phone also houses a capacious 5,000mAh battery which is considerably higher than what most handset makers are doing. Charging is fast at 18W but not quite as quick as what some flagships can do. It’s a trade-off that ASUS thinks customers will appreciate. Oh, and it does reverse charging which means the phone can be used to charge other devices. Just make sure to have the proper USB C cable. 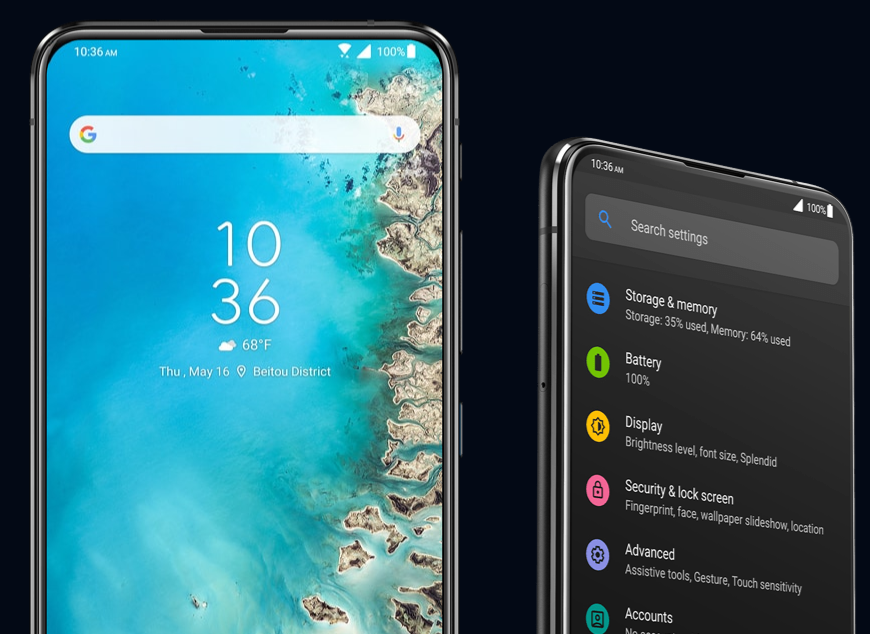 The phone employs a 48-megapixel f/1.79 main camera (with laser focus) and a 13-megapixel 125-degree ultra-wide camera plus a dual-LED flash. As a reminder, this is for both front and back. There’s no optical stabilization because of the tight fit, but both cameras support up to 4K video recording.

For those worried about the camera snapping off in a fall, fear not. Similar to how the pop-up camera on the OnePlus 7 Pro retracts, this one immediately jumps back into place when a drop is detected. ASUS says this mechanism has been test to work on more than 100,000 flips and drops.

Other noteworthy features include an aluminum body, Gorilla Glass 6, and a 3.5mm headphone jack. Not present, however, are wireless charging and water resistance.

The ZenFone runs Android 9 Pie with the ZenUI 6 and figures to be a near-stock experience. A system-wide dark theme is present as is a dedicated hardware “Smart Key” which can toggle Google Assistant or a custom action like do not disturb or screen shot.

ASUS is on the Android Q Beta program so the ZenFone 6 could be quick to see the next version of Android as well as “R” when it’s released.

While most phone makers are content with asking $800 or more for a flagship, ASUS keeps the price of its ZenFone much lower. In fact, the starting price is just €499 (about $557 USD) for the 6GB/64GB model.

When it comes to internet usage, video watching is one of the main interests of users. Most users are mainly inclined towards streaming videos so it matters a lot to know how much data is required for it. Of course, we do require a smooth internet connection to be able to stream our favorite content online.If video streaming is your preference then you must consider high-speed internet like Spectrum internet for instance, that do not offer data caps. This means you do not have to worry about any extra fee surprises in your bill that are bound to happen if you run out of your data limit. Most of the providers in the United States do impose data caps so it is very important to find out an internet plan that assures a no data cap policy. For that, let us first have a look at the data that is needed for various video streaming platforms.YouTubeJust like using any other app on your smartphone, YouTube being one of the popular platforms needs data too. It nearly takes 562.5 MB of data per hour. This holds valid when you stream at around 480p resolution. In case you want better resolution, then you might require 1.86 GB per hour for 720p. For 1080p you might require 3.04 GB. For watching videos in 4K, you will require a massive 15.98 GB of data per hour.NetflixWe all agree with the fact that how much we love Netflix as it has successfully evolved as one of the most popular video streaming services. For subscribers exceeding 130 million, the internet speed is not much of a problem. An hour of video streaming in standard definition would need around 1 GB of data. If you want to enjoy high-quality video streaming, you might need up to 3GB. For ultra-high-definition, you can require up to 7 GB of data per hour.The selection of accounts can help you decide a suitable resolution for your connection. If you want to save your data, you can check the settings option and click the save button when you want.Amazon Prime VideoAmazon Prime Video was launched by Amazon as a streaming service in 2011 and has ever gained popularity among the users. Nowadays it is seen as one of the biggest competitors for Netflix. This service provides up to three resolutions for the users. Among them include good, better, and best. The Good enables streaming videos at around 480p in standard definition and utilizes a data of 800 MB per hour. The Better option allows an HD stream with a data requirement of around 2 GB per hour. The Best option consumes nearly 6 GB of data per hour. You should also know that accessing Amazon Prime Video on your mobile app results in low data consumption as compared to the desktop app.HuluHulu is another important video streaming option that uses somewhat less data as compared to Netflix and Amazon Prime Video This makes Hulu as one of the most economical options available. You require around 680 MB per hour of data for the standard definition. If you switch to a 720p high definition setting, the data requirement may jump to 1.3 GB per hour. 1080p resolution can need data up to 2.7 GB per hour. You can also stream live TV if you are using Hulu’s $39.99 monthly plan.SpotifySpotify is one of the best-known music streaming platforms but not everyone knows that it also provides a video service in certain areas. The company does not disclose much about the data requirements of the video streaming service. However it only notifies that video streaming requires more data as compared to music streaming and is much like the ones needed for other video channels. Mostly the videos are in high definition and can consume up to 3 GB of data for an hour streaming.VimeoVimeo does not have any details regarding data usage. The standard definition content can need up to 353 MB of data per hour. As far as the HD videos are concerned, they need up to 2.75 GB per hour.StanMany of us might not have heard of Stan as it is accessible in Australia only. The app usually provides four-tier quality. The lowest standard definition setting can require up to 1.13 GB per hour while HD and 4K can require around 3 GB per hour and 7 GB per hour respectively.DirecTVThe DirecTV website also does not display clear information about the required bandwidth. In case if your provider puts a data limit, you can always reduce your video quality. The data consumption parallels to the aforementioned video streaming platforms.Sling TVSling TV is another one of the highest quality video streaming service that uses around 2 GB per hour of data for its highest quality option. The data required for medium quality is 540 MB per hour that further lowers to 360 MB per hour for low-quality streaming options.Summing UpYou need to be aware of the data consumption involved in the video streaming service you are using. This can save you from exceeding your data limit and paying any additional cost.EDITOR NOTE: This is a promoted post and should not be viewed as an editorial endorsement.
Read more
Reviews

This portable UV-C wand sterilizes your items and work space

In an age when cleaning wipes and hand sanitizer aren’t easily found, it’s a little tough to keep your personal items and space clean. Not wiped down and washed, but free from germs and bacteria.Rather than fighting your way through a store to find only to find out there are no wipes left, take a smarter approach. The SANITECH UV-C Wand, on sale for just $72.99, is the sort of thing you buy once and get to use over and over. Try that with those Clorox Wipes.About the size of an electric toothbrush, the SANITECH UV-C Wand emits a UV-C light that kills 99.9% of germs and bacteria within ten seconds. It cleans all sorts of surfaces, including clothes, bedding, phones, keyboards, laptops, and more. If your hands touch it, you can probably clean it with the SANITECH UV-C Wand.FeaturesUV-C light kills 99.9% of germs, bacteria, & viruses within 10 secondsChemical-free for your safety & can be used on baby products, cosmetics, pet supplies, on home and public spacesLasts up to 90 minutes w/ full chargeBuilt for travel & convenienceBuy it NowPurchase the SANITECH UV-C Wand for just $72.99, a savings of 18% off the normal $90 price. Choose from Winter White, Flamingo Pink, and Seabreeze Green.Best SellersEarn Credits!For every $25 you spend in the AG Deals Store you get $1 credit added to your account. And, if you refer the deal via social media or an email that results in a purchase, you’ll earn $10 credit in your account.First Time Buying?If this is your first time buying, you are also eligible for 10% discount! Just be sure to subscribe for email updates.Free StuffNot looking to spend any money today? No worries. You can still visit the AndroidGuys section for freebies and pick something anyhow.
Read more
Reviews