Home News This Saturday, a NASA probe will brave the heat to try and...
News

This Saturday, a NASA probe will brave the heat to try and ‘touch’ the sun 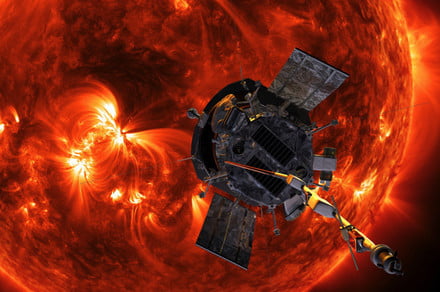 On Saturday, August 11, when most of you are enjoying what will hopefully be a relaxing and enjoyable day off work, NASA engineers will be facing one of their most stressful days in a long while. That’s because it is the day on which the Parker Solar Probe will enter the very edge of the corona, the atmosphere of the sun, and make the first in-situ measurements to be taken there. The goal? To uncover crucial details about the origins of the solar winds, which go on to bombard Earth and pose a major challenge to our spacecraft and communications systems. Oh, and to unravel a giant mystery about the sun’s temperature, too.

“The corona is very hot, millions of degrees Centigrade, and we don’t know why,” Stuart Bale, a University of California, Berkeley professor of physics, who was one of the four principal investigators responsible for developing the FIELDS suite of instruments on board the probe, told Digital Trends. “The sun itself is a relatively cool — 6,000-degrees Celsius — star. Somehow this cool star makes the corona very hot. This hot corona then escapes the sun’s gravity and becomes the ‘solar wind.’”

As you might imagine, a mission that essentially involves flying into the Sun (or, at least, to its periphery) involves dealing with a fair amount of heat. While the Parker Solar Probe is equipped with a heat shield for protecting its various onboard sensors, it will nonetheless have to contend with temperatures almost hot enough to melt steel.

Bale has been working on the project since 2009 (“a long time,” he said), and everything since then has been building up to this point. Should all go according to plan, the instruments he helped develop will be used for measuring electric and magnetic fields in the corona and solar wind, before relaying this information back to Earth.

So spare a thought for the folks at NASA HQ when you’re out having your BBQ Saturday night, or sitting down to watch a movie. And if, through some miracle, you do happen to spot a tiny solar probe traveling at 340,000 mph (note: unless you have Superman-level vision, this is extremely unlikely) make sure to wish it good luck on its journey!


Facebook
Twitter
Pinterest
WhatsApp
Previous articleTo infinity and beyond? Space Force may be a real thing by 2020
Next articleSmelly shoes? Panasonic’s deodorizer kit promises to waste the whiff