These yeast colony patches are like living Geiger counters 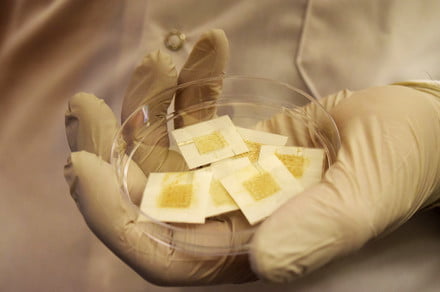 Most people don’t think twice about the radiation when they check in for a routine X-ray. But for radiologists and workers at nuclear power plants, the risk is persistent.

To save them from side effects, workers use protective clothing and patches, called dosimeters, that keep track of radiation exposure and warn the wearer if they have reached dangerous levels. The only problem is, these patches are worn for a month or two before being shipped off for analysis. It can take another week after that before the results come in.

A faster way to measure exposure may soon be on its way, thanks to a team of researchers from Purdue University who have designed a dosimeter that can measure radiation exposure in near real time. It’s simple, made out of little more than paper and yeast, and costs pennies on the dollar. A paper detailing the device was published recently in the journal Advanced Biosystems.

The patch works by enveloping a yeast colony (the same kind used to brew beer and make bread) within freezer paper, aluminum, and tape. After being worn for a day or so, wearers place a drop of water on the patch and scan it with a system that measures how much yeast remains by how well the patch conducts electricity. Radiation kills yeast so, the less yeast, the higher the wearer’s radiation exposure.

The patch’s biggest advantage is in its near real-time readout, which can help both radiologists and responses to nuclear disasters, who are exposed to much higher levels of radiation and may not have the luxury to wait weeks for results.

The patch can detect radiation doses down to one milliard, according to the researchers, which puts it close to par with conventional dosimeters. The researchers hold a patent to the device but have not yet decided on how the move forward with it commercially. Either way, it will still take several years for the device to go through regulatory approval before it comes to market.


Facebook
Twitter
Pinterest
WhatsApp
Previous articleGeorgia is paving the way for a high-tech, sustainable highway
Next articleNeed to work from the road? Here are the 5 best laptops with LTE

VIP SALE! Save an extra 40% on apps and software

We’re back with another limited-time sale for various items in the AndroidGuys Deals Store! This time around the VIP SALE, which runs September 18-21, is your chance to save an extra 40% on apps and software.The prices we have in the AG Deals Store are already really low, but we’re more than happy to offer a coupon code for more savings. Enter the coupon code VIPSALE40 at checkout and we’ll drop the price by an extra 40%.Valid September 18-21Here’s a handful of some of the most popular apps and software in the AG Deals Store. Look around, though, there are a lot of choices and nearly all of them are eligible for the discount.The Social Distancing Lifetime Subscription Bundle Ft. Rosetta Stone – $120Power Through Important Books & Interesting Topics in Just 12 Minutes Each with Access to 385 Book Summaries and CountingFor the First Time Ever, Get Access to Learn All 24 Languages on Rosetta Stone’s Award-Winning SoftwareBest-Selling VPN Of All Time! KeepSolid Protects Your Online Activity & Lets You Browse Without Restrictions for LifeLingvaNex Translator: Lifetime Subscription (Desktop and Mobile Bundle) – $48Lingvanex Translator was created with the mission to enable people to read, write, and speak different languages anywhere in the world. It’s an excellent translation and dictionary app with the main function of translating text, voice, images, websites, and documents. It works on a wide range of platforms including iOS, Android, macOS, Windows, and more so you can start translating media in more than 112 languages instantly!KeepSolid VPN Unlimited: Infinity Plan (10 Devices) – $36Whether you’re using a private internet connection or public Wi-Fi, your online privacy and security is far from guaranteed. With top-rated solution VPN Unlimited, you can regain control over your digital life with full security and anonymity online. There are no speed or bandwidth limits, so you’ll still enjoy full browsing speeds, without the dangers of leaving your data exposed or the geographic restrictions set on certain websites abroad (think content viewing websites like Netflix or Hulu).Enpass Password Manager: One-Time Premium Lifetime License – $15Our everyday life is filled with too many passwords and various types of credentials. Use Enpass password manager to organize everything in one place securely. It also takes care of your credit cards, identities, social security number, and all the credentials you need handy in your daily life. And the best thing, none of your Enpass data is stored on servers; instead, it is stored locally on your device. You can sync it through your own trusted cloud account, all ENCRYPTED!!Restflix: Restful Sleep Streaming Service Subscriptions – As low as $18Restflix is a revolutionary streaming service designed to help users fall asleep faster and rest better. With 20+ personalized channels full of sleep meditations, bedtime stories, calming visuals, and binaural beats to harness the brain’s responsiveness to sound and help create a meditative, restful state. Through the use of sleep meditations, bedtime stories, peaceful and serene natural views and sounds, better sleep is achievable. Along with using Restflix for developing better sleep habits, it can also be a great tool for relaxation and mental healing.
Read more

Everything you need to know about Final Fantasy 16 for PS5

The Legacy of the Crystals has shaped our history for long enough.The latest in the epic Final Fantasy series has
Read more

The Miami Hurricanes visit the Louisville Cardinals in an NCAA matchup Saturday, September 19. The Cardinals are coming into the
Read more