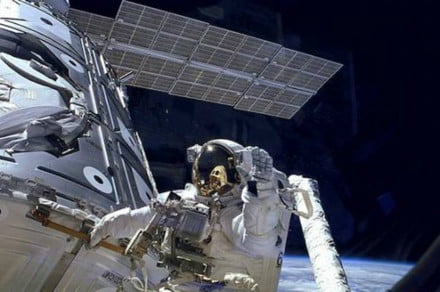 Don’t you hate it when, after leaving for the day, you discover on arrival didn’t bring something you need? That’s apparently what happened on May 16 to a NASA Astronaut, according to Geek. But the discovery — a missing SD card for a GoPro — soon revealed another problem.

The story began when an astronaut stepped outside the International Space Station (ISS). While he was maneuvering in space checking components on the spacecraft, he prepared to capture video. That’s when the problems began, as reflected in a conversation between the astronaut and NASA’s Johnson Space Center in Houston, Texas.

The exchange revealed an unfortunate level of confusion about how to use a common piece of earthly technology. Here’s Geek’s transcription of the NASA video:

“Hey, uh, Houston, I gotta ask a question about the GoPro real quick,” the astronaut said. “Pushing the button, I see a ‘No SD’ [alert]. … Do I need that to record? And if it’s recording, is there supposed to be a red light on?”

“I’m told that if it has the card in it, it should have a red light if it’s recording,” said a voice from mission control at the Johnson Space Center.

“And if it says ‘No SD,’ what does that mean?” the astronaut asked, repeating his earlier question.

“I think that means no card,” mission control replied.

“Well, let’s just forget it for now. I’ll get it later,” the astronaut said. “Let’s just not worry about it.”

There was no follow-up discussion or commentary about the GoPro or the missing SD card from the simulcast video that switches back and forth from the space station and mission control.

Feustel is a Lake Orion, Michigan native with a Ph.D. in Geological Sciences with a specialty in seismology. A NASA astronaut since 2000, Feustel is a veteran of two previous spaceflights. Before Expedition 55, Feustel spent more than 29 days in space and more than 42 hours on spacewalks.

NASA has not identified or confirmed the SD card-less astronaut’s identity.