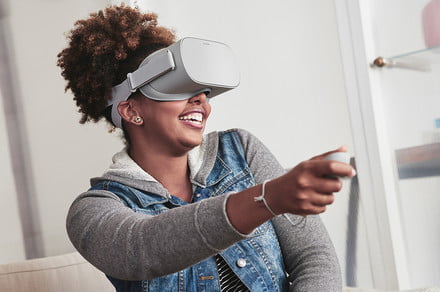 Oculus VR Chief Technology Officer John Carmack confirmed on Wednesday, May 2, that the Facebook-owned company is currently working on a second-screen component for the recently launched Oculus Go virtual reality headset. He said a demo is already available but getting it into the companion app for iOS and Android “will take a little while.”

The idea is to enable friends and family to view your VR experiences on a nearby TV or streaming device while you’re deep in the virtual realm. Google’s Daydream View already provides a similar feature, as owners can click on the Cast icon at the bottom of the interface to cast the current experience to a Chromecast-enabled device.

The Oculus Go is the latest VR headset from Facebook, joining the popular Oculus Rift for the PC. In Facebook’s overall VR assault, the Oculus Go serves as an affordable low-end headset with standard head tracking that competes in the mobile VR space. The company’s upcoming mid-range platform dubbed “Santa Cruz” will rely on six-degree inside-out tracking for total, tether-free movement. The current PC-dependent Oculus Rift serves as the “high-end” premium device.

Even if you have a Samsung Galaxy-branded phone and were considering the Gear VR, the Oculus Go may be your best bet for mobile VR. That is because the Oculus Go is optimized for VR and doesn’t have all the phone-related processes running in the background, bogging down the processor as it struggles to render your experience.

But the big drawback to VR is that it can be isolating. Unless you’re playing a social-based or multiplayer game, you can feel alone in the experience. Fortunately, the Oculus Rift and HTC Vive provide means for mirroring your adventures on an external display for friends and family to enjoy. Chromecast support now provides a similar shared experience for mobile headsets, and eventually, you can do the same with the new Oculus Go headset.

At launch, there are more than 1,000 experiences available for the Oculus Go, part of which were already available for Gear VR owners. Oculus said developers have worked around the clock to update their Gear VR apps since this time last year so they run optimally on the Oculus Go. The platform also has many exclusives you simply can’t play on the Gear VR.

Apple has finally sent out invitations for its next hardware event. The event is expected to be where we see the iPhone 12, AirPods Studio, and more.
Read more

Apple claims its decision to discontinue shipping charger bricks with new iPhones was ecologically motivated. But how much of an impact will it really have?
Read more

The Galaxy S20 is not a subtle phone. It is a powerhouse, and it's here to make its mark. You
Read more

When Chromebooks start this competitively, it's easy to be blinded by low prices.Among the tens of thousands of deals coming
Read more